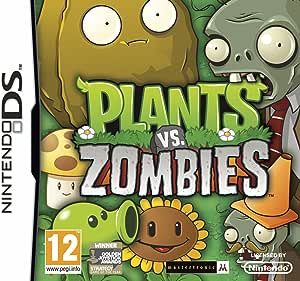 Get ready to soil your plants ? the most complete version of Plants vs Zombies yet! The smash-hit iPhone, XBLA & PC title finally comes to DS. Zombies are invading your home and the only defence is your arsenal of plants to stem the attack. The fun never dies!

Su
5つ星のうち5.0 lawn of the dead
2011年5月8日に英国でレビュー済み
Amazonで購入
I've being playing the PC version of Plants vs Zombies for several years and it is an incredibly time engulfing game - hours pass by without you knowing.

The premise is simple - you own a house and the zombies want to get in and eat your brains, you need to fight them off and the only things you have are plants. These plants, however, aren't just the ordinary run-of-the-garden plants - they fight back.

There are 48 different types of plant which can do a number of things to help defend you home, from sun flowers (which produce the energy points) to pea-shooters and butter bombers.

There are 26 different zombies from the ordinary zombie to the bungee-jumping ones who drop in to steal your defences and miners, there are even a dancing zombie (it used to be a Michael Jackson thriller tribute but it now a lamer Simpson's type Disco Stu and without the music that used to accompany the MJ one and the Disco Dancer on the PC version).

Crazy Dave's Twiddy Dinkies car boot sale opens after the level 3.4 and you can start to buy the added extras to help your fight back, including extra plant slots.

The game is played on the bottom screen with the top screen used as a display for the timer which seemed like a waste of a screen. I have to admit that I ignored the top screen most of the time due to the amount of action on the bottom screen, but on the odd occasion I have had a moment in the game to look at it I found that there is at least one crow sat on the fence and, I laughed when I saw the sleeping crow hitching a lift on the head of a zombie during the night time.

There are a number of unlockable extras with the game:

- Zombatar - unlocked after completion of level 1 - create your own zombies

- almanac - unlock after completion of level 1 - more information about your plants and those zombies. It is worth reading the notes in the almanac when facing the bigger, more unusual, zombies

- VS - opens after completion of level 1 (around level 2.2) and allows you to play with another person either by ds wifi or ds download (so no extra card is needed)

- Achievements - as you play you will receive awards - for example, using the cherry bomb a certain number of times gives you an award and so on

- Mini Games - open at around level 3.2 - there is a great selection of mini games some classics and some new ones

- Puzzle - opens around 4.4 - an engrossing series of games and once again some original ones and some new ones.
- Survival - how many levels can you survive before the never ending zombie attack reaches your brain ... er ... house.

I haven't played all the games in the Mini Games and Puzzles section yet but of those I have played I have to admit I am incredibly happy with them. So much so I have played the first few over again, even though I have already beaten them.

Level 3.5 may cause a problem as you need to shout at the DS in order to keep your plants firing. This is no good if you are a child (or an adult) in a place where you can't make a noise.

The new mini games include:

The side games are a great way of adding extra money to buy the next upgrade from Crazy Dave.

Of course things don't get easier when you start the game a second time. On your second run through Crazy Dave selects the first 3 plants for you to use, reducing your choices by 3. Sounds okay. The problem is Dave's choice may not be right - for example, day my choose a night plant and it's day time, or a water plant and there's no swimming pool.

One strange side effect of playing the game you may find yourself humming the song "zombie on your lawn" by the "sunflower" which you open when you have conquered the main game.

If you want to play PvZ and are away from your computer then this is the perfect option. Great fun and, in my opinion, it's better than the PC version -  Plants vs Zombies - Game of the Year (PC CD) .
続きを読む
28人のお客様がこれが役に立ったと考えています
違反を報告
レビュー を日本語に翻訳する

rmsusieb
5つ星のうち5.0 Zombilicious
2011年10月7日に英国でレビュー済み
Amazonで購入
Brilliant, totally addictive, must have game. I bought this for the PC and loved it so much that I bought the DS version for when I can't have my turn on the PC (husband's got there first) or when I'm away from home. I do prefer the PC version but this one is nearly as fabulous. It is however a great time waster and I would advise not to start playing if you need to be somewhere soon! I didn't think it would have lasting playability but I was wrong. I'm now on my third way through the adventure and still enjoying all the other stuff (mini games, puzzles, zen garden). I would definitely recommend this game.
続きを読む
6人のお客様がこれが役に立ったと考えています
違反を報告
レビュー を日本語に翻訳する

BlitzyBlitzyBlah
5つ星のうち5.0 Very well executed zombie executions.
2012年11月21日に英国でレビュー済み
Amazonで購入
Great game and tremendous fun. Very addictive. Plant a variety of plants on your lawn which will attack and repel an army of zombies which are advancing towards your house, culminating in a huge wave of zombies at the end of each level. You need to choose plants wisely as each costs sunlight which has to be collected from the sky or produced by the sunflowers you can plant. As the game progresses you get a greater variety plants to play with which is a good job as the zombies get tougher and more bizzare. The game advances to scary nightime levels, swimming pool levels requiring water plants and eventually onto the roof for the final showdown. The drag and drop style is perfect for the DS console. The lawn is split into square sections into which you can drag a single plant so the amount you can plant is limited. Zombies shuffle along the screen towards your house. Plants will thwart their efforts with defences including firing peas, eating zomies whole (but you have to wait for them to be digested) or acting as tough barriers. If a zombie reaches a plant it will chomp and eventually destroy it and if they manage to shuffle into your house at the far end of the screen they will EAT YOUR BRAINS!. The game is fairly easy going at first so kids (not too young) will find it OK. Later it gets quite a bit harder. Though it never gets massively hard it can get rather frantic. Mini games and marathon survival levels add longevity and these are all good fun in their own right too. The game is very well balanced, the difficulty curve is steady and the controls smooth and easy. You'll probably get through it fairly quickly but in that time you'll have the best fun to be had on the DS.
続きを読む
違反を報告
レビュー を日本語に翻訳する

Mrs. F. Moulin
5つ星のうち5.0 Just what y grandson ordered!
2020年9月15日に英国でレビュー済み
Amazonで購入
I love this game! I introduced my grandson to it and then I bought him it for his DS. It goes down very well! Good harmless fun.
続きを読む
違反を報告
レビュー を日本語に翻訳する

Smith
5つ星のうち5.0 A bit of fun & very easy to play
2012年3月5日に英国でレビュー済み
Amazonで購入
This game is good and very easy to play. Basically all you have to do is make sure a load of zombies don't get past the lawn and into your house. Every time you complete a level a different plant is unlocked which has a different way of killing the zombies. There are quite a lot of different plants. Some plants slow the zombies down by making them eat the plants, some plants fire at the zombies. You choose what plants you want to use.Some plants eat the zombies, some blow them up etc.. It is very addictive. It didn't take that long to complete the game but there are also mini games to play. I would recommend the game. You don't have to use your brain too much to play.
続きを読む
違反を報告
レビュー を日本語に翻訳する
すべてのレビューを参照します
Amazonプライム会員ならお急ぎ便、日時指定便が使い放題
さらに、映画もTV番組も見放題。200万曲が聴き放題 。クラウドに好きなだけ写真も保存可能。
> プライムを無料で試す