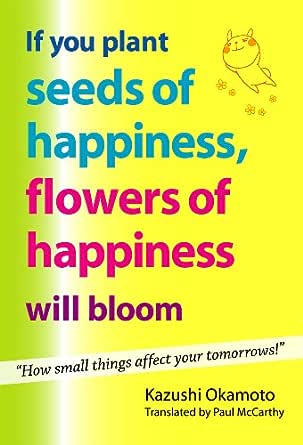 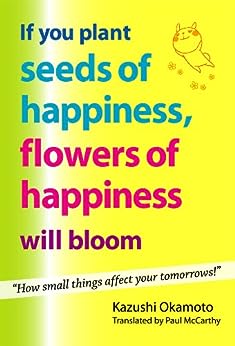 We say that we want to be happy. If that's what we really want, we should start planting seeds of happiness. The kind of flower you get depends on the seed you have planted; this is a law of nature. In the same way, if you plant the seeds of happiness, the flowers of happiness will bloom. Seeds of happiness or seeds of unhappiness—which do you plant the most? Buddhism teaches the law of cause and effect, which enables you to become a happier you. This book applies that clear law to the troubles that various people have, explaining things in a way that will be easy for them to understand. So, how can we make sure the flowers of happiness bloom for us? The authors want to help by discussing the troubles of people whom they have encountered over these past few years.

Kazushi Okamoto entered the University of Tokyo in 1994 and majored in mathematics. As he searched to find meaning in life during his university days, he came to the conclusion that Truth was to be found not in the world of mathematics, but in Buddhism. He has given over 120 lectures and seminars per year all over Japan for those with no background in Buddhism. In March 2012, the original Japanese version of this text was published by Ichimannendo Publishing Co. Ltd. and 170,000 copies have been sold in Japan to date. Paul Mccarthy is professor of comparative culture at Surugadai University in Hanno, Saitama, Japan. He holds a PhD in East Asian languages and civilizations from Harvard University, and has taught Japanese, Anglo-American, and comparative literature at universities in the United States and Japan. He has published numerous articles on the literature of Tanizaki Jun'ichiro and other aspects of twentieth-century Japanese literature.

Bita Enayati Asakura
5つ星のうち5.0 I really enjoyed reading this book
2014年7月12日 - (Amazon.com)
Amazonで購入
I really enjoyed reading this book. It has so many concrete examples of how to overcome so many common problems in life with a win- win attitude. What is unique about this book is that it draws so much from the Buddhist scriptures and Buddhist psychology that gives you a perspective unlike anything you've read before. A simple read and yet a book that continually makes you go back and retread to grasp the depth of its techniques when dealing with difficulties in life.
続きを読む
3人のお客様がこれが役に立ったと考えています
レビュー を日本語に翻訳する

be present now
5つ星のうち2.0 Very simplistic
2020年1月13日 - (Amazon.com)
Amazonで購入
This book is meant for children or certainly younger people. I was looking for more depth--returned it for refund.
続きを読む
レビュー を日本語に翻訳する

Amazon Customer
5つ星のうち5.0 I love love love this book
2017年4月28日 - (Amazon.com)
I love love love this book! It's like my best friend, listening to my woes and quietly giving me a pat on the back, reminding me that everything will be okay. It's such a healthy, encouraging and constructive book.
続きを読む
3人のお客様がこれが役に立ったと考えています
レビュー を日本語に翻訳する
Amazon.comのカスタマーレビューを見る(4) 5つ星のうち3.8
click to open popover
Amazonプライム会員ならお急ぎ便、日時指定便が使い放題
さらに、映画もTV番組も見放題。200万曲が聴き放題 。クラウドに好きなだけ写真も保存可能。
> プライムを無料で試す