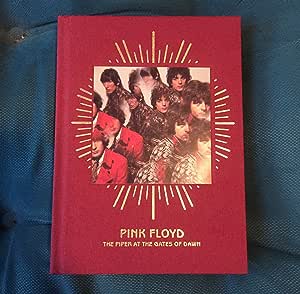 Piper at the Gates of Dawn (Bonus CD) (Dlx)

At the time The Piper at the Gates of Dawn was originally released in 1967, it was one among many aurally ripped, acid-tripped albums including Jimi Hendrix's Are You Experienced, Cream's Disraeli Gears, Jefferson Airplane's After Bathing at Baxter's, and, of course, Sgt. Pepper's Lonely Hearts Club Band, which the Beatles were recording down the hall from Pink Floyd at Abbey Road. But as those albums have gracefully slipped into the mainstream of our music consciousness, Piper, along with The Velvet Underground and Nico, still sounds like it broke through from another dimension. Pink Floyd were employing musique concrete techniques, inventing glissando guitar, and exploring areas of trance with tunes like "Interstellar Overdrive," actually two takes of an extended rave-up laid on top of each other. Mixing sci-fi imagery with swinging London metaphors and pastoral fantasies (the title is lifted from The Wind in the Willows), Pink Floyd's music was even more dappled, swirled, and surreal than the light shows that accompanied their performances. Piper represented Syd Barrett's vision as the sole composer of all but three songs. He was yet to have his acid-induced meltdowns, and all things were possible and beautiful. Barrett mixed whimsy on "Bike" with cynicism on the wordless but ominous "Pow R. Toc H."; goofy innocence on "The Gnome" and mysticism on "Chapter 24." But there's no doubting the contributions of Richard Wright with his swirling, reverb-drenched organ fugues and jazz ellipses and Roger Waters's earth-rooted bass. Nick Mason's underrated drumming, time-shifting polyrhythms, and colorful flourishes pushed Barrett's elliptical pop even further over the edge, especially on the space-music opus "Astronomy Domine." This deluxe edition, designed by Storm Thorgerson with three discs nestled in a clothbound book, almost seems a bit staid for an album this hallucinogenic. But it's full of great period photos of the band and a reproduction of one of Barrett's original notebooks with collages, poetry, and other writing that reads like a schizophrenic's diary. The original album was recorded on only four tracks, making stereo effects and panning somewhat rudimentary and often annoying. But this expanded release includes a full mono mix of the album which provides a more coherent sound and, surprisingly, a bit more depth. This triple-disc release also contains a CD of all their 1967 single sides, including "See Emily Play," a vintage slice of psychedelic pop, and two alternate, single run-through takes of "Interstellar Overdrive." Some of the songs are just wacky, some of the technology and tape edits rough-hewn, but The Piper at the Gates of Dawn is one of those albums that actually appears more radical in retrospect. --John Diliberto

2007 digitally remastered and expanded three CD Special Edition of Pink Floyd's debut album, released to coincide with the album's 40th Anniversary. The packaging, designed by Storm Thorgerson, resembles a cloth-covered book, and holds three CDs, along with a 12-page reproduction Syd Barrett notebook. Discs One and Two will contain the full album, represented in both stereo and mono versions. Both have been newly remastered by James Guthrie. Disc Three features bonus tracks, including all the Pink Floyd singles from 1967, ('Arnold Layne', 'See Emily Play', and 'Apples And Oranges'), plus the B sides 'Candy And A Current Bun' and 'Paintbox'. Other tracks include a version of 'Interstellar Overdrive' (Take Two) of the original recording sessions, previously only available on an EP in France and the 1967 stereo version of 'Apples And Oranges'. EMI. 2007.

gARThIbiza
5つ星のうち5.0 I want to tell you a story, 'bout a great man, if i can .......
2015年5月19日に英国でレビュー済み
Amazonで購入
This has got to be the best "psychedelic" album of the sixties ! Written by a man ( Syd Barrett ) who at the time of recording this music, was, i believe a genius. Sadly within a few months due to excessive consumption of LSD, he was lost, and never capable of anything approaching this again. You could say that this was "The Pink Floyd" but afterwards, they were "just" The Floyd. Barrett left and so did the Pink element. All the songs are by Syd, except Take up thy stethoscope and walk, by Roger Waters, and a couple of band collaborations. An infectious collection of whimsy and nursery rhythms, backed by jazzy inventive sound. It sounds as good today as when released, in fact even better, on this re-mastered Cd. I have the original LP but this is clearer, better defined. Sadly his last gig was at the 'Ally Pally, where he was incapable of playing his guitar, but just listen to this Cd and be thankful that when he was in his prime, it has been preserved, for the rest of us to enjoy now and forever. R.I.P. Syd.
続きを読む
12人のお客様がこれが役に立ったと考えています
違反を報告
レビュー を日本語に翻訳する

mr r s hopkins
5つ星のうち5.0 Psychedelic Masterpiece
2020年2月13日に英国でレビュー済み
Amazonで購入
The Floyd's psychedelic masterpiece, released in 1967 and never surpassed. I've been listening to the original mono pressing for 53 years and have heard various recordings of these classic tracks, mostly in CD form. This remastered vynil is nothing short of stunning - from the space rock opener Astronome Domine, through to the proto-metal intro/outro of Interstellar Overdrive, the whimsy of Syd Barrett's The Gnome/Scarecrow/Bike and the driving jazz-funk of Take Up Thy Stethoscope. Piper came out of nowhere, nothing in its genre has ever bettered it, and this remastering adds a truly powerful dimension.
続きを読む
1人のお客様がこれが役に立ったと考えています
違反を報告
レビュー を日本語に翻訳する

Devilscucumber
5つ星のうち4.0 Classic Syd
2016年6月14日に英国でレビュー済み
Amazonで購入
Also having a UK "Nice Pair" (plus having had the old stereo CD) I did notice some of the previously smeared details were clearer, its always good to hear something new on a recording you are familiar with, even though this has been remastered via high res digital from the analogue master tapes, it still raised the goose bumps at times, but it also seemed like I might have been hearing a slight loss of quality at times, due to the age of the master. I have quite bass happy Martin Logans driven by a Plinius, but sometimes it seemed the bass was lower than I remembered. All in all well worth buying if you are into this experimental psychedelia, I think I like the first 3 tracks the best, and hope they bring out a vinyl mono version with the different mixes/takes too.
続きを読む
6人のお客様がこれが役に立ったと考えています
違反を報告
レビュー を日本語に翻訳する

Rui Paulino
5つ星のうち4.0 Very pleased with how this sounds
2014年8月7日に英国でレビュー済み
Amazonで購入
Very pleased with how this sounds. I imagine this is the next best thing, when it comes to listening to Piper At The Gates of Dawn. The mono mix CD showcases the album's sound in a way I had never heard before and, thusly, highlights details and strengths (and, to be fair, weaknesses as well) that would've escaped me otherwise. I haven't heard the 2011 remaster in detail yet, but so far I'm not sure how the sound can be improved on this album. Perhaps, cleaner and more defined, but there's something more authentic to the original sound that this version offers. There's also the stereo mix to get a different glimpse of things, although that one is frankly unnecessary and a topic of curiousity, when you've got the mono, in my opinion.

Naturally, I imagine those who'll be interested in buying this product will already be familliar with the album, at some length. Yet, for those just getting started with Pink Floyd's earlier works, know that this is a very rough product of what would come later, commercially. However, there's an immense well of raw creativity and experimental thoughts for the time, which create a tremendously original palette of sounds and arrangements, for what would better be known as Psychedelic Rock. The Piper At The Gates of Dawn also exhibits some of the band's cruder, but powerful displays of technique in each respective instrument. Namely, Mason's drumming comes to mind as bold and interesting, as opposed to his later renditions (say, in The Wall).
続きを読む
4人のお客様がこれが役に立ったと考えています
違反を報告
レビュー を日本語に翻訳する

D. S. Tooze
5つ星のうち5.0 Great sound quality on vinyl
2017年3月5日に英国でレビュー済み
Amazonで購入
Well remastered onto vinyl with great sound. Fabulous trippy British psychedelia that's very off the wall - nobody makes music like this anymore for sure! Essential for fans of late sixties music and the best bet if you want it on vinyl as it sounds great and an original 1967 pressing would cost you about £1000 so go for this instead of other later represses.
続きを読む
4人のお客様がこれが役に立ったと考えています
違反を報告
レビュー を日本語に翻訳する
すべてのレビューを参照します
Amazonプライム会員ならお急ぎ便、日時指定便が使い放題
さらに、映画もTV番組も見放題。200万曲が聴き放題 。クラウドに好きなだけ写真も保存可能。
> プライムを無料で試す