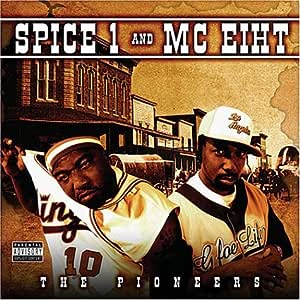 Philip Y.
5つ星のうち3.0 For big Spice 1 / MC Eiht fans only
2005年6月13日 - (Amazon.com)
形式: CD
There's no question about Spice 1 and MC Eiht's status as West Coast legends. During the last decade, both of them were two of the biggest name coming from the West Coast - Eiht representing Compton, while Spice 1 representing the Bay Are. So the title of the album suits them well. However, this album isn't what you would've expected from such great artists. The truth is that both of them have their best years behind them and both have fallen off just a little bit during the last 3 or 4 years. It seems like they lost their edge a little bit... Now, don't get me wrong the album is good, and definitely better than most albums coming out these days, but with such huge names I expected more. The biggest problem seems to the production, which is handled by some totally unknown producers. Some of the beats are trully great (and on those songs The Pioneers come out with their best verses), but on about half of the songs, the beat just doesn't fit Eiht and Spice's styles - some of the beats are just way too happy sounding, while Eiht and Spice excel on wicked type of beats. Overall, out of the 14 songs (there is 2 useless skits and a solo by Hollow Tip that I didn't count) about half is trully great ,but the other half just doesn't live to the expactations (mostly because of the beats, but also because it seems Spice and Eiht didn't put enough effort with their verses), making an impression that a part of the album was kind of rushed. I know for sure, that with some better known producers and a bit more time put into writing the verses, the album could've been a classic. But I guess they worked with what they had, and made the best of it. The bottom line is that it you are a big Spice 1 and MC Eiht fan, like I am, you should get the album for it's great songs (classic cuts like "Keeping Me High", "I Ain't Scared", "It's About That Time" and a few others ).
続きを読む
5人のお客様がこれが役に立ったと考えています
レビュー を日本語に翻訳する

Crazy Jim
5つ星のうち3.0 "Pioneers" Review
2004年12月14日 - (Amazon.com)
形式: CD
If you can't get enough of that West Coast gangsta rap then the idea of Compton veteran MC Eiht and East Bay gangsta Spice-1 teaming up for an entire album probably has you foaming at the mouth. Eiht and Spice had previously collaborated on 1993's smash hit, "The Murder Show" and the title track for Spice's "1990-Sick" album (just to name a few) and have proven to have quite a chemistry on wax. The two O.G.'s on the California rap scene are ready to get them lowriders bouncing once again with "The Pioneers".

First thing that needs to be made clear is that of the seventeen tracks on this album, two are skits, four are solo joints, and one is a bonus track from Hollow Tip's solo album that doesn't feature either Eiht or Spice. If you're doing the math that means there are actually only ten tracks that feature both artists together. For those of you who emphasize quality over quantity, ten solidly-produced bangers featuring the two is nothing to frown on. Well, not all of the tracks are bangers. There are some crazy tracks on here though. "That's The Way Life Goes" has both rappers spitting it like only they can over a hot beat from DJ Epik. "Can't Stop Us" and "Been A Long Time" continue to give fans of both what they want to hear. "Do Better", a Spice-1 solo is one of the finest tracks on the album and the duo's "The Murder Show Pt. 2" does justice to the classic original.

"Pioneers" isn't an instant classic and it's not gonna convert anyone who didn't care for Eiht or Spice before this but if you're a die-hard fan of either one or both then you'll want to pick it up. Contrary to what other reviewers have said, the beats aren't the quality of Dr. Dre production but there are some hot ones here. "Pioneers" is what it is. A collaboration between two veteran rappers that should easily please both of their fan bases and earn them both a little bank as well.

G$
5つ星のうち4.0 2 west coast vets together should = fire
2004年11月3日 - (Amazon.com)
形式: CD
Spice 1 & MC Eiht are true west coast pioneers. Both been around since the late 80's, Both have been a part of over 13 cd's, both don't put out bad albums, both don't get enough airplay (at least on teh east coast I don't know about the west), and both should have over 20 million sold if they got that much deserved airplay. This cd is pretty good and a must have, although I did think it would be better; but it's still good. It has 2 almost classic songs, 1 ok song, 1 I skip (which Spice or Eiht isn't on) and the rest are just good, not great. Production is lacking a little, but the producers are ones I barely heard of: Mark Knoxx, Goldfingaz, & DJ Epik, with one song done by Warrington. Guests are very minimal and each has 2 solo songs on here.

"Compton meets the Bay Town so stand the f*#k back N!gg@z"

Check out all my reviews