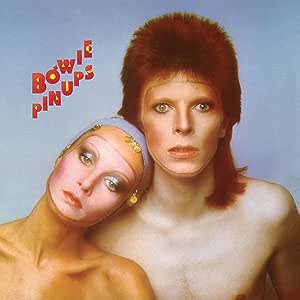 CJ rambling man
5つ星のうち4.0 Bowie paying tribute to his music heroes - for a change.
2019年3月17日に英国でレビュー済み
Amazonで購入
Pin ups: first released in 1973,Was certainly a change of direction for David Bowie,after recording and releasing amazing classic albums such as; Hunky dory,Ziggy stardust....and Diamond dogs.
Now was the time for him to pay homage to some of his biggest influences in music,by recording pin ups.he didn't need to do it - i suppose,but despite being an icon,he was also such a modest and kind man.(I never met him) - don't be silly,but observed it throughout his time in the spotlight.

Influenced by the London scene in the 1960's: songs include; Here comes the night (Them),See emily play (Pink floyd),Friday on my mind (Easybeats),Everything's alright (The mojo's) and don't bring me down (The animals - and The pretty things).
The Who must have been his favourites,as they crop up twice with; Anyway,anywhere,anyhow (think that's the right order) and substitute.
closing track: The kinks' Where have all the good times gone,is another fine interpretation by David Bowie.

Cynics who don't like cover versions,can take heed in the fact that Bowie performs all these 'covers' in his own inimitable style,which are different to the originals - thus making them his own.both his "Anthony Newley" and 'cool' droll style vocals,are evident on Pin ups.
Excellent musicianship and re-mastered sound quality on this 2015 CD re- issue of pin ups.
Iconic album cover featuring 'super model' of her day: Twiggy (another pin up) you could say,intices the listener to explore the music within.
Bowie could have been an innovator of album cover versions;John Lennon (his friend) had a similar idea not long afterwards,with his 'Rock n roll' album,and much later on; Rod Stewart with the 'Great American song book' series - to name but two.
After a couple of listens I'm sure you'll warm to and even be hooked on Pin ups - a fine album of cover versions that work !
Ps: almost forget to mention the hit single 'sorrow' UK no 3,one place higher than the original by The Merseys - whoops ! Another fine version by DB.
続きを読む
8人のお客様がこれが役に立ったと考えています
役に立った
フィードバックを送信中...
フィードバックをお寄せいただきありがとうございます。
申し訳ありませんが、お客様の投票の記録に失敗しました。もう一度試してください。
違反を報告
レビュー を日本語に翻訳する

Kevin H.
5つ星のうち4.0 Not Essential But a Superior Covers Album
2019年1月31日に英国でレビュー済み
Amazonで購入
I remember getting my first vinyl copy of this. I was trying to complete my Bowie collection and went into a local music shop that had a bargain section specifically hoping to find it and it was there. It was slightly “exotic” because it was marked “Face1” and “Face 2” on the label rather than Side 1 and Side 2. A couple of days later a friend was round and I had played both side and then put on side 1 again he said “Yes, when I first got Pin Ups I played it all the time too.” My sister never let him live it down.

This was Bowie, with a great band, looking back to the music that inspired him (his pin ups) before he took his next leap forward. It is nostalgia as much as anything that make playing this on vinyl again such a pleasure. It sound great throughout. I supposed as it is an album it is not an essential buy. Many consider it as a lesser, bonus album between Aladdin Sane and Diamond Dogs, but it is more than that to me and many others who enjoyed it. The hit single from this album was Sorrow which reach No. 3 in the U.K., No. 2 in Ireland and No. 1 in Australia. I remember it got lots of radio play, on Top of the Pops and it was one of the records that was part of the collective bunch of friends singles that turned up at every party. I loved the whole album but Where Have All the Good Times Gone? This is a great example of a cover version transforming and equaling a great original, which it true of other songs on this album.
続きを読む
5人のお客様がこれが役に立ったと考えています
役に立った
フィードバックを送信中...
フィードバックをお寄せいただきありがとうございます。
申し訳ありませんが、お客様の投票の記録に失敗しました。もう一度試してください。
違反を報告
レビュー を日本語に翻訳する