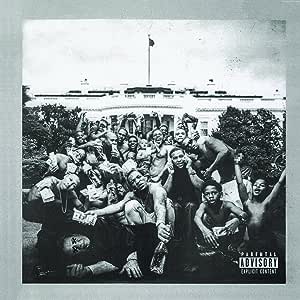 To Pimp a Butterfly

Mr. John R. Cracknell
5つ星のうち3.0 Great music unitelligible lyrics
2018年6月15日に英国でレビュー済み
Amazonで購入
Not my normal listening but bought this after hearing the CD raved about on a couple of "arty" music programmes, BBC Radio 3 etc. I must say that the music is really interesting but the lyrics are completely unintelligible and the CD does not have a lyric sheet (badly needed). Searching for the lyrics elsewhere I was surprised to see how poetic, extensive and really interesting they are and how much reading them whilst listening adds to the value of the piece. Shame Kendrick didn't record this in a way that made the lyrics stand out, but I guess that's exactly why I don't listen to more of this sort of music.
続きを読む
6人のお客様がこれが役に立ったと考えています
違反を報告
レビュー を日本語に翻訳する

DAMIAN
5つ星のうち3.0 Astounding Album, Poor Pressing
2020年1月31日に英国でレビュー済み
Amazonで購入
Well what can you say about this album? Apart from that it is a perfect fusion of Jazz and Hip-hop with a hint of blues, mainly in the storytelling.

Production is very strong, somthing that Kendrick Lamar is well known for having on his albums.

The lyrical content is "thought provoking" yet balanced and paints vivid pictures in your mind.

I have this on CD and Vinyl as i do all his other albums. The vinyl is not unfortunately the best pressing I've had, quite a lot of surface noise and fine surface scratches where it was rammed with no thought into the paper inlays.
続きを読む
3人のお客様がこれが役に立ったと考えています
違反を報告
レビュー を日本語に翻訳する

richard Bernard
5つ星のうち5.0 Master piece and a stark warning from Kendrick, Brilliant, play to the end and listen!
2016年3月6日に英国でレビュー済み
Amazonで購入
To Pimp a Butterfly, a musical play, where each song represents a scene of the unfolding drama. Through the course of the sixteen titles on the album, Kendrick describes his rise as a rap star, the temptations he faced with it, the self-hatred that ensued, and the epiphany that allowed him to remain grounded. Although he understands that he is part of a system that is ruled by “the evils of Lucy”, Kendrick feels that his influence can be used to heal, uplift, unify and inspire his community. By becoming an outspoken leader, Kendrick also realizes that he might be sacrificing himself – Uncle Sam and Lucy have no problems crushing those who stand up to them.
In short, To Pimp a Butterfly goes against everything the music business is about. It is harsh, honest, difficult, brilliant, unpredictable, anti-mainstream, Afrocentric, a little religious and filled with clarinet solos. There is however one thing Kendrick needs to remember: Lucy does not give up that easily.
続きを読む
8人のお客様がこれが役に立ったと考えています
違反を報告
レビュー を日本語に翻訳する

Fade
5つ星のうち5.0 Will take some time but this album is something many need to digest
2015年4月11日に英国でレビュー済み
Amazonで購入
Best and most needed album in recent years, I've not been this impressed at 1 body of work since I can't remember. Everything from start to finish (especially finish) was tailor made for the worlds current affairs in race, youth, music and hip hop.
I'm due to buy 2 more copies to give to my friends just because I feel what Kendrick is saying on this is essential for a lot of people to hear right now for some change to ignite thought in a commercially nonsensical platform of music.
続きを読む
4人のお客様がこれが役に立ったと考えています
違反を報告
レビュー を日本語に翻訳する
すべてのレビューを参照します
Amazonプライム会員ならお急ぎ便、日時指定便が使い放題
さらに、映画もTV番組も見放題。200万曲が聴き放題 。クラウドに好きなだけ写真も保存可能。
> プライムを無料で試す