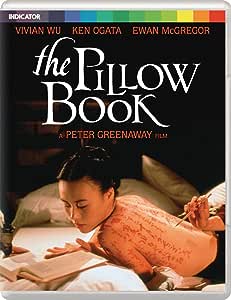 Inspired by Sei Shonagon's first-century diary, Peter Greenaway's The Pillow Book is an audio-visual tour de force, and a showcase for one of British cinema's most singular talents. Starring Vivian Wu (8½ Women), Ewan McGregor (Trainspotting) and Ken Ogata (Mishima: A Life in Four Chapters), the film is among Greenaway's most daring and adventurous works. All region

Jef Cameron
5つ星のうち5.0 LONG OVERDUE FOR A CATCH-UP!
2011年9月25日 - (Amazon.com)
Amazonで購入
I sincerely wish Mr. Greenaway would consider taking a couple months out of his busy filmmaking schedule to revisit this MASTERPIECE and give us a restored Bluray Disc of "The Pillow Book." The Criterion Collection would do well to add "TPB" to its lineup of master works of film, as this I find to be Peter Greenaway's most accomplished work thus far (and that's saying something).

While I appreciate the past necessities of tweaking things to work on the older smaller screens (when this came out originally on DVD), now that most of us have larger-sized and wider-aspect flatscreens, it would be more appropriate - and desirous - for there to be a bluray version that brings back the wondrous use of space and aspect utilized in the original film's theatrical release. Additionally, it would be greatly instructive to hear what Mr. G might have to say about why he created this film to look and feel the way it does: what were his motivations for film/video, aspect ratio, image placement, etc.

"The Pillow Book" takes a fascinating, and revealing, look at culture, art, and of course literature, and how they interplay with our more primal, instinctual urges; and ultimately what all of it says about being human and our struggle for meaning as well as happiness. A "must-have" for any serious film aficionado/collector!

SaraW
5つ星のうち5.0 Not even your usual art house film - wow
2017年4月21日 - (Amazon.com)
Amazonで購入
Not your average film, The Pillow Book is really a piece of art. It is BEAUTIFUL but I had to watch it several times before I figured out exactly what the storyline was. Very much art house theater genre.
続きを読む
4人のお客様がこれが役に立ったと考えています
レビュー を日本語に翻訳する

Martin Doudoroff
5つ星のうち4.0 Challenging Greenaway film (barely) makes it to DVD
1999年7月16日 - (Amazon.com)
Amazonで購入
Peter Greenaway is an extremely erudite and sophisticated (some say pretentious) artist. Unfortunately for the medium, he's nearly the only active, high-profile filmmaker whose work continues to push back the accepted boundaries of film. This film is quite different in many stylistic ways from prior Greenaway films, although it is structurally similar to all his films. Just as The Baby of Macon pairs with The Cook, The Theif, His Wife and Her Lover in their stagey motifs, Pillow Book pairs with Propero's Books not only in their obsession with writing, but with the use of innovative image composition techniques. It is these latter traits that make them two of the most important films of the last twenty years. Like all Greenaway films, they appeal only to audiences who are ready to accept a deeply idiosyncratic set of conventions as opposed to the usual Hollywood fare (drivel). (This is a roundabout way of saying that most Americans will not really enjoy this movie -- or any other Greenaway, or Fellini, or Bergman movie, or for that matter, any serious work of art -- because they "just want to be entertained".) I was lucky to see this film in the theater prior to acquiring the DVD. Those who weren't as lucky won't know what they missed. The picture on the DVD is savagely cropped. (It is NOT a pan-and-scan; it is simply cropped. Twelve to fifteen percent of the original film image is missing on each side of the video image.) The consequence of the cropping is that the elaborate compositions of overlapping digital images is wrecked, and many of the images look rather weird. On the other hand, the transfer is acceptable, and the film is watchable; because this is not mainstream cinema, we're lucky to have it on video at all! Even in its compromised form, this film is worth a hundred immaculately produced ephemeral Hollywood films. I strongly recommend planning on repeat viewings with a copy of the screenplay (all Greenaway screenplays are in-print): this work invites extended scrutiny and discussion.
続きを読む
22人のお客様がこれが役に立ったと考えています
レビュー を日本語に翻訳する
Amazon.comのカスタマーレビューを見る(118) 5つ星のうち4.0
Amazonプライム会員ならお急ぎ便、日時指定便が使い放題
さらに、映画もTV番組も見放題。200万曲が聴き放題 。クラウドに好きなだけ写真も保存可能。
> プライムを無料で試す