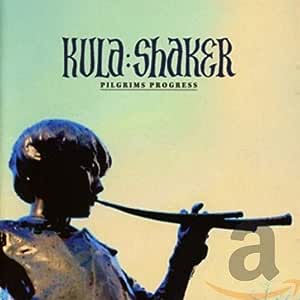 2010 release from the British band led by Crispin Mills. Kula Shaker burst onto the music scene in 1996 with the release of K, one of the fastest selling debut albums ever. Imploding after the follow up, they disappeared for nearly 10 years until a very low key album in 2007 signaled their semi-return. Pilgrims Progress showcases a more mature sound, drawing on Folk, '60s R&B and traditional influences as well as their signature Psychedelia. Kula Shaker have retained a very loyal and dedicated fanbase who have stayed with the band since the '90s and have been waiting for this new album for a very long time. Strange Folk.

Frankie Five Angels
5つ星のうち4.0 Get K.2.0 instead if you have not listened to KS for a while... but good
2017年2月18日に英国でレビュー済み
Amazonで購入
This Kula Shaker album in my opinion does not capture their best creative time; which I must say was rekindled and in a very positive KS trademark sound with 2016 album K.2.0 which I absolutely love and every single track is a treasure.

Not saying that I do not enjoy this one, as I have given it 4 stars which is pretty cool, but there is no comparison between this....and K and Pigs, Peasants....... which are my favourite, but along now with their latest...

So just one word of advice if I may: if you left KS after the first 2 albums and you want to test where they have been ...then get the latest.
But if you are a Kula Shaker lover you must have this too.

A solid good album with in my world is a 4 stars.

Hengist
5つ星のうち4.0 A minor classic and masterpiece of modern psychedelia.
2012年5月13日に英国でレビュー済み
Amazonで購入
Very different from the first album, (so don't expect more of the same) but maybe even better. It is a very diverse album, with influences ranging from the Kinks, Incredible String Band, Jethro Tull and the Moody Blues. It all hangs together very well though, apart from the final track,(good as it is in its own right) which is a full blown prog rock excursion that doesn't really fit in with what has gone before. And that is the only reason I've given it four stars, rather than five.
Summing up: as a long time connoisseur of psychedelic music, from the sixties to the present day, I can honestly state that this album is a real treat and winner, that deserves to be listened to over and again, to fully appreciate it.
続きを読む
1人のお客様がこれが役に立ったと考えています
違反を報告
レビュー を日本語に翻訳する

R. L. Maguire
5つ星のうち5.0 Pretty Darn Great
2010年7月12日に英国でレビュー済み
Amazonで購入
What a great album and it is fab to hear them again, with a new set of songs that follow easily on from their earlier works. As other reviewers have said - more acoustic focus rather than electric bass and sitar - although thankfully they are still there sprinkled across the album. My only gripe is that the title track can come across as a morbid subject, too far away from the new Hosanna - and I feel that other tracks are stronger lyrically and musically. OK it's a good metaphor for growing up, which the band have obviously done. I wonder if the recording had been done during the summer, then would the songs show a different trait? There are some stand out moments especially the organ from Sts. Pierre & Pauls on Winters Call - think "She's so heavy" from Abbey Road - well that's what I thought it matched to! Go get it, plenty to appreciate, it does deserve commercial success, Thanks to the band.
続きを読む
2人のお客様がこれが役に立ったと考えています
違反を報告
レビュー を日本語に翻訳する

Phil Murray
5つ星のうち3.0 I'd give it 3.5
2014年5月15日に英国でレビュー済み
Amazonで購入
I consider this to be the weakest of the four Kula Shaker albums but there are still some good tunes on here. My favourites include Ophelia, Only Love, Cavalry and Winters Call. The rest of the songs are pretty good or average. My favourite KS album is Strangefolk but I would give this album 3.5 if I could.
続きを読む
違反を報告
レビュー を日本語に翻訳する