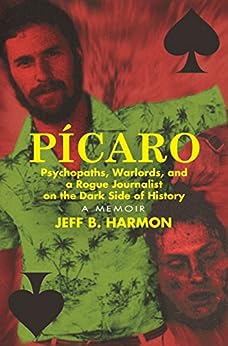 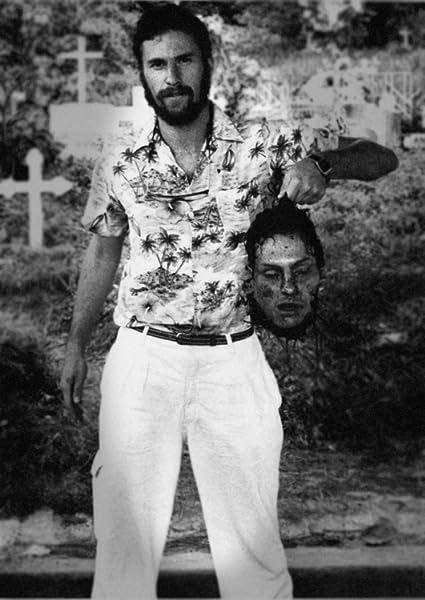 Picaro: Psychopaths, Warlords, and a Rogue Journalist on the Dark Side of History (English Edition) Kindle版

Jeff B. Harmon is an award-winning writer, director and producer. His documentary films have aired on the BBC, Channel 4 (UK), National Geographic Explorer, PBS and other networks throughout the world. They have won numerous awards including Britain's Royal Television Society Journalism Award, the Cable Ace Award and the Grand Award at the Houston International Film Festival. His unflinching documentation of war and clandestine history provoked governments and rebel movements alike, resulting in three execution orders on his life. Harmon's trilogy of films (JIHAD, AFGAN, and WARLORD OF KAYAN) on the Soviet-Afghan War are considered the definitive documentaries about that conflict, capturing three sides: Islamic holy warriors, the Soviet armed forces and an independent Afghan warlord. In recognition of their historical importance, National Geographic Explorer and MSNBC profiled him and his Afghanistan films in a ninety-minute special. He also produced and directed SADDAM'S IRAQ, a Channel 4 special on life inside Saddam Hussein's Iraq just before Operation Desert Storm. He took a giant leap from war - writing, directing and composing ISLE OF LESBOS, an irreverent lesbian musical comedy feature film with a little something to offend just about everyone! A war correspondent and photographer as well as a filmmaker, Harmon spent more than twenty years covering the world's most dangerous conflicts - deliberately putting himself at far greater risk than merely reporting the crossfire. He was the only journalist in El Salvador's 12-year civil war to successfully penetrate a right-wing death squad - revealed in his documentary, THE FRONT LINE. He infiltrated Paraguay's Nazi underground, and covered the fall of homicidal dictator Idi Amin and the bloody reign of Central African Emperor Bokassa. Harmon joined a war, fighting alongside the mujahideen in an operation against the Soviet army. Harmon's writings and photographs have been published in such periodicals as Harper's, Life, The Sunday Times Magazine, The Independent Magazine, New Statesman, The Daily Telegraph, Penthouse, and Gallery, where he was chief foreign correspondent. He has been profiled in myriad publications and television programs including Esquire, The Guardian, Time Out, NBC Europe's The Ticket, and Heroes Made in the USA. Jeff B. Harmon recently completed Pícaro, a memoir of his years as a war correspondent and documentary filmmaker as well as his covert dealings with the Mafia and CIA. --このテキストは、paperback版に関連付けられています。

rob scarfe
5つ星のうち5.0 A live hand grenade
2014年11月22日に英国でレビュー済み
Amazonで購入
This book is much more than a rogue journalist's memoir. It verges on literature. Celine's "Journey to the End of the Night" and Malcolm Lowry's "Under the Volcano" come to mind. I am familiar with Harmon's ground-breaking documentaries. But Picaro is a different animal altogether. Unforgiving in its expose of silent history and the pathological individuals the author encounters. This gay adventurer clearly has a death wish running roughshod over his trysts with the CIA, Mafia, Afghan warlords, Hollywood celebrities and even his own parents. Harmon is a contrarian and bit of a scoundrel who doesn't give a damn where the chips fall. The only home he feels comfortable in is the field of fire. This is not a book for the faint-hearted. It is a relentless journey that spares no-one including Harmon himself. The author and his book are a live hand grenade.
続きを読む
3人のお客様がこれが役に立ったと考えています
違反を報告
レビュー を日本語に翻訳する

Knof
5つ星のうち5.0 Brutal and Sardonic
2014年11月9日にドイツでレビュー済み
Amazonで購入
Picaro is a brutal depiction of war. Harmon leaves no mercy in his wake. There is no false sentimentality or clichés. He machine-guns his depiction of people he encounters along his epic journey not sparing even himself. The book is fast-spaced and sardonic. A rare and dark insight into war and history.
続きを読む
違反を報告
レビュー を日本語に翻訳する

Stephen B. Mumford
5つ星のうち5.0 A Fascinating, Compulsively Readable Memoir
2015年10月13日にアメリカ合衆国でレビュー済み
Amazonで購入
War reporting is perhaps the last "cowboy" profession, at least within the legal occupations, where rules can be created on the spot, because a war zone by nature cannot be made orderly.
Reporters are generally cautious in admitting their attraction to the existential drama, adrenaline, fear and death of war. Harmon makes this attraction explicit, in ways that set him apart from mainstream journalism, but which also gained him access to the very heart of darkness that most reporters only circle around.
These dark, rarefied places are brought to light in Harmon's documentaries, which include interviews with a death squad leader in El Salvador during its civil war; embedments with an elite Salvadoran army unit hunting rebels, as well as with the Soviets during their Afghan War; extended stays with mujahideen rebels actively fighting the Soviets during which Harmon miraculously avoided death time after time, even as his subjects were dropping and bleeding out around him.

Many reporters covering these wars would have given their eye teeth for any one of these opportunities, yet only Harmon and his partners succeeded. Reading his descriptions of life in the war zone, it's not hard to see why. Harmon comes across as a uniquely intense, funny, fearless and charismatic guy, but also someone who manages to convince many very dangerous and unstable people that he understands them, that he can make their motivations and actions clear on camera. And it turns out that even the guy who pops out peoples' eyeballs as an occupation wants to be understood, and Harmon convinces him to let the movie camera roll for a no-bullshit interview. Asked why he trusted the film maker, he replies, "Because you're on the same trip as me."
Which increasingly seems to be the truth as Harmon describes ever-more harrowing close calls as he's drawn to up the ante, as surely as the moth flies to the flame. Besides a tendency to head for the most dangerous looking person in the room, Harmon doesn't try terribly hard to hide his homosexuality in these theaters of war, moving from front line to gay nightlife sometimes within hours. He intuits that some of his contacts - who are about as socially progressive as Tony Soprano - know or suspect about his double life; yet these crafty, macho warlords, fixers, torturers, spies, arms dealers, crooks and schemers all seem to be shape-shifters themselves, as they negotiate their roles according to the shifting political winds. They understand that nothing is quite as it seems, and perhaps overlook those traits they don't like in the pleasure of Harmon's company. And the pleasure is clearly mutual. Harmon never passes moral judgement, a fact that many readers may find problematic. No doubt that has something to do with the author's lack of acceptance or wide recognition within journalistic circles, even as his documentaries won top honors at important film festivals.

Harmon describes the glory and sexiness that are the other side of war's terrible coin. He revels in it, alongside his subjects; he never pretends journalistic neutrality or objectivity, instead hurling himself into his subjects' enthusiasms, in ways that would make college journalism teachers blanche. Accompanying a mujahideen attack on a Russian/Afghan army base, Harmon cannot resist taking his turn emptying a full AK47 clip at the target. The description is like a first sexual experience, revelatory, profoundly satisfying. It's no wonder Harmon wormed into situations that today's journalists never would.
Yet after a decade of this creative marauding the author finds he must wind down. Harmon's description of his life post-wars is cursory, including the contemplation of suicide. This is in contrast to the harrowing pleasures of the author's description of his childhood, reared by two hardened narcissists too busy battling each other and their own demons to notice the children at their feet. The psychic damage clearly starts there, and Harmon implies its toll in his catalog of risky behaviors in and out of war zones.

Evidently self-published, Picaro could have benefited in places from a good editor, but more importantly the book deserves the publicity that a major publisher could have brought to it. I hope word of mouth helps Picaro to its audience.

I highly recommend this book, as well as the documentaries themselves which are available through Journeyman films.

Doug Molitor
5つ星のうち5.0 Hidden history exposed
2014年8月2日にアメリカ合衆国でレビュー済み
Amazonで購入
As his title suggests, filmmaker/journalist Jeff B. Harmon’s book combines a war correspondent’s memoir with the wild and darkly comic adventures of a picaresque novel. Except that this is real life, and we follow a non-fictional rogue, a documentarian who fast-talked his way into being embedded with first the mujahideen, then the Soviet Army, to film the 1980s Afghan War, then made his way into the Afghan mountains to cover a warlord who held both sides at bay. Harmon’s other contacts included Salvadoran death squad leader Roberto D’Aubuisson, courtiers to the deranged Central African Emperor Bokassa I, Nazis in Paraguay, Hollywood auteurs, Mafiosi, and CIA operatives...usually for journalistic purposes, but more than once, pursuing frankly illegal schemes. It comes as no surprise that he misses death by inches or minutes numerous times in these pages, even before you learn that Harmon, as a gay man, also indulged his libido in many of the most radically homophobic places on earth.

All of this is reported in a compulsively readable, ragged, present-tense stream-of-consciousness style that leaps from horror to hilarity and back again. Around the time you wonder if the point was to document the truth, or just flirt with the Grim Reaper, Harmon answers plainly: It’s both. He’s not interested in making anyone like him; as harshly as he portrays his subjects, he can paint an unflattering picture of his own motives and actions.

But for all the harrowing battle scenes, the most chilling encounter he describes is with his father Larry Harmon, successful TV producer of “Bozo the Clown” and this year’s contender for the Daddy Dearest Award. Jeff asks for a $3,000 loan so he can return to a war zone; Larry refuses, then demands that his son agree to a million-dollar life insurance policy with Larry as beneficiary. You can understand Jeff’s decision to reject his Hollywood birthright, and his preferring situations with no pretense of civilization. On the other hand, knowing just how lethal it all was, you have to admit old Larry knew a good bet when he saw it.