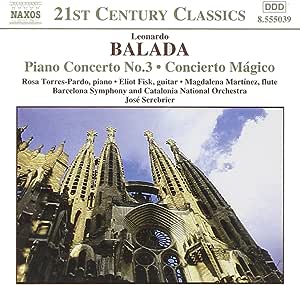 Here's a disc of contemporary works written between 1997 and 2000 that are bound to satisfy listeners who value modernism, as well as those who seek tuneful accessibility. For Spanish composer Leonardo Balada, who made his reputation with such uncompromising abstract works as the Steel Symphony, convincingly blends folk music and avant-garde compositional techniques. His Piano Concerto is rooted in the pasadoble of the bullfight arena, the sinuous music of North Africa, and the Aragonese dance the jota. It succeeds because Balada seamlessly manages the transitions from folk to contemporary sonorities and techniques. His orchestrations are wonderfully imaginative. At times in the Concierto Mágico, he transforms the orchestra into a giant guitar. At other times, the orchestra simulates the rhythmic handclapping of gypsies at a flamenco bash. Soloists are all outstanding, and Serebrier conducts with evident sympathy and enjoyment. Naxos has a real winner here. --Dan Davis

G.D.
5つ星のうち3.0 Failed to create any lasting impression
2011年12月21日にアメリカ合衆国でレビュー済み
Amazonで購入
Well, I have to admit that my assessment of this disc is more lukewarm than most critics'. I knew Balada's music from before only through his impressive, massive "Steel" symphony (recorded by Lorin Maazel) and did approach this release with some expectations. The music of Leonardo Balada (b.1933) is accessible, despite his deployment of avant-garde techniques, and I suppose a possible if abstract point of comparison would be with surrealist paintings that employ familiar elements in unfamiliar settings. Balada uses elements of Catalan folk music, snippets of tunes and familiar rhythmic patterns to create often glittering, shimmering and harmonically rather radical textures, but apart from some immediately appealing effects I had a hard time finding much here that I would wish to revisit. At least the performances seem excellent and the recorded sound is superb, so these factors do presumably not contribute to my reluctance.

The third piano concerto (1997) strike me primarily as being a sequence of effects by which a sense of unity is achieved through immediately recognizable stylistic traits rather than anything resembling real development. At least it contains several fascinating elements, and it manages to retain the listener's interest throughout its three quirky, kaleidoscopic movements. The Concierto Mágico, Balada's fourth concerto for guitar and orchestra, has less to offer. As one expects from guitar concertos, it sets typically Spanish elements in an essentially classical framework. There are plenty of orchestral effects, of course, and plenty of busy, quarreling discussions between soloist and orchestra, but nothing adds up to anything.

The Music for Flute and Orchestra gives us more of the same; moderately intriguing orchestral effects, juxtapositions of busy passages and stretches of stasis, but little in terms of cumulative impact. The performances are, as mentioned, pretty excellent; Magdalena Martínez provides a lively rendition of the solo part in the Music for Flute & Orchestra, Eliot Fisk is an assured, resourceful soloist in the guitar concerto, and Rosa Torres-Pardo dispatches the solo part in the piano concerto with bravura, spirit, and seeming effortlessness. The Orquestra Simfonica de Barcelona I Nacional de Catalunya under José Serebrier impresses as well, with a broad palette of colors and generally vigorous (though refined) playing. Still, I am not sure they are able to convince me that this music in any way stands out from the crowd.