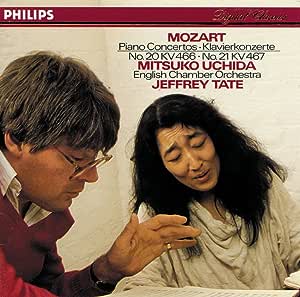 Mozart's greatest piano concertos bring together so many elements identified with his style that they offer an ideal introduction to their composer's uniqueness. This is especially the case with the well-loved pair Nos. 20 and 21, which were produced in one fertile outburst in 1785. Here you will find both the dramatic flair and the comic high spirits of Mozart's tragic and comic operas, the last symphonies' breadth and polyphonic ingenuity (especially in the lengthy first movement of No. 21), and the conversational intimacy of the chamber music. This recording is one of several collaborations between conductor Jeffrey Tate and Mitsuko Uchida. In the wake of such legendary interpreters as Clifford Curzon, the Japanese pianist established a reputation in the '80s as one of the finest contemporary Mozarteans for her combination of poetic sensitivity and thoughtful involvement. Uchida plays with characteristic poise and never settles for superficial prettiness of sound (notice, for example, the sense of suspense she brings to the extended trill left hovering shortly into the soloist's entrance in No. 21). The restless, tragic momentum of No. 20 glows with inner fire, while Uchida's singing grace of line conveys an almost vocal warmth. There is sympathetic balance of soloist against orchestra (which features superb contributions from the winds), as well as a sure grasp of Mozart's larger structural symmetries. As an alternative to the extremes of period-instrument orthodoxy and romantic excess, this disc belongs in the collection of any lover of Mozart. --Thomas May

M. Huang
5つ星のうち4.0 Good performance with some minor flaws.
2008年3月24日にアメリカ合衆国でレビュー済み
Amazonで購入
This performance of Mozart's two masterpiece piano concertos are fairly good, especially in the no. 21. But there are some reservations in the 20th that keeps mee giving this CD a higher rating.

The main thing that brings this CD rating down a bit is the recording. While it is uniformaly decent, in general I felt the piano was a bit overwhelmed by the orchestra. I'm not sure if its the actual recording or just Mitsuko Uchida's interpretation but this is a piano concerto and for my taste the piano should be center stage.

In the 20th concerto, her playing is a bit passive for me and this is where she gets overwhelmed by the orchestra. It almost sounds like she is afraid of making this piece sound too romantic so she holds back. And while her technique is flawless, I find it odd at times where she chooses
to use the sustain pedal, most notably at 3:25 and at 8:40 where she plays the broken octave scales with her left hand. While this is certainly a way to play it, it sounds a bit sloppy and it doesn’t seem to fit the way she plays the rest of the movement. The same problems occur in the second movement, notably at around 4:50 the winds, especially the flutes seem to be overwhelming the piano. The final movement is done fairly well and as I am not too familiar with it, I had no problems, except some orchestral imbalances (strings vs. winds and horns)

I throughly enjoyed her playing of the 21st concerto, all three movements from start to finish. She seems to have lost any of her reservations she had playing the 20th. Her technique is, again, flawless and her playing in general is well balanced. The balance between piano and orchestra seems much better. Her cadenza in the first movement is also entertaining and well played. The Enlgish Chamber Orchestra is pretty much perfect here and Jeffery Tate does a wonderful job with the conducting.

I realize I was a bit nit-picky with reviewing her playing the 20h. It is a masterpiece, after all, but while it isn't bad I just don't think its the best. But if you get this CD just for the 21st Concerto, I think it is well worth it.
続きを読む
4人のお客様がこれが役に立ったと考えています
役に立った
フィードバックを送信中...
フィードバックをお寄せいただきありがとうございます。
申し訳ありませんが、お客様の投票の記録に失敗しました。もう一度試してください。
違反を報告
レビュー を日本語に翻訳する

David Robinson
5つ星のうち5.0 Yummy, some delicious moments
2003年1月12日にアメリカ合衆国でレビュー済み
Amazonで購入
As the saying goes, "Mozart is Music" and Uchida is Mozart! On this recording, you have two of the most popular Mozart piano concertos in modern performance(that is, played on a very big grand piano--not a fortepiano as they would've been in Mozart's day).
Uchida is crisp and technically correct, though perhaps, as some other reviewers have noted,lacking the passion of other artists' recordings. In the familiar No. 21 ("Elvira Madigan") the cadenzas are Uchidas. In No. 20 the cadenzas are Beethovens--thrilling!
The recording sounds as if it was done in a marble hall of a very grand Chateau, although it was probably done in Waltham Town Hall, London, with some discrete manipulation of the sound. The result is rich and resonant.
I'd personally recommend this for a classical music enthusiast who wanted just one CD of Mozart concertos. But perhaps its even better as a slightly obscure recording to give to a friend who already has a CD by another pianist. It's worth it for the track 3 cadenza alone.
続きを読む
17人のお客様がこれが役に立ったと考えています
役に立った
フィードバックを送信中...
フィードバックをお寄せいただきありがとうございます。
申し訳ありませんが、お客様の投票の記録に失敗しました。もう一度試してください。
違反を報告
レビュー を日本語に翻訳する
その他の国際レビューを読み込む