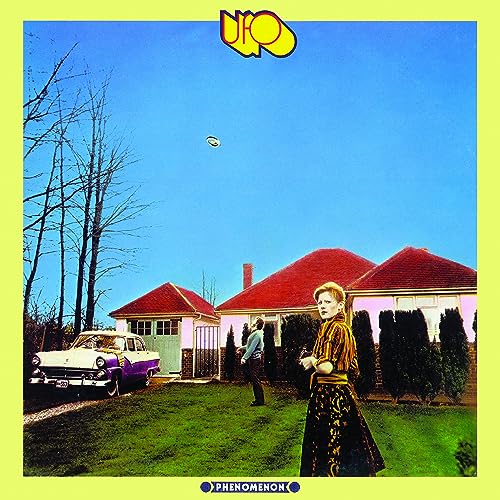 Stephen Ford
5つ星のうち4.0 Class Rock Act
2019年1月7日に英国でレビュー済み
Amazonで購入
The album that started UFO's run of success through to the end of the 70’s, mainly due to the sublime guitar talents of new boy Michael Schenker-the spark that was missing at the beginning of their career it seems. in fact, during this era there were few heavy rock acts to touch the superb playing and writing of the Schenker/Phil Mogg/Pete Way axis-of course not forgetting the excellent Andy Parker on drums. The outstanding ‘Doctor Doctor' and ‘Rock Bottom' (my favourite UFO song of all-time) are the obvious standout tracks and other highlights are the short and snappy rocker ‘On My' infectious instrumental ‘Lipstick Traces' and the marvellously dramatic ‘Queen of the Deep’ + early 60’s cover number ‘Built for Comfort' is handled very well. The likes of later studio records such as ‘Lghts Out' ‘Obsession' and the post-Schenker ‘The Wild t W & t Innocent' are better but ‘Phenomenon' is a rock album with the band's ever-present balance of light and shade inherent in a varied collection of classy songs. Also a mention for the bonus tracks which are very good, especially both versions of ‘Sixteen'. Pleased to finally own this on CD.
続きを読む
4人のお客様がこれが役に立ったと考えています
違反を報告
レビュー を日本語に翻訳する

The Pez
5つ星のうち4.0 An underrated classic
2012年1月1日に英国でレビュー済み
Amazonで購入
I have recently been playing catch-up on all the music I should have been into in the 70's but due to circumstances was not able to. UFO were a big gap in my knowledge, I had heard of them, remember reading articles in Sounds about them but never bought into them, my mistake, my loss.

I was recommended "Phenomenon", "Force It" and "No Heavy Petting" by friends and I now have them all, good rockin' albums one and all, it is no good regretting that I did not get into them sooner, I have them now and I love them.

Now to go out on a limb a little, everyone raves about "No Heavy Petting" stating it is the album that should have been but wasn't and can not understand why and that Phenomenon was the crude but gifted child showing it's potential. In my view (for what it's worth), I can see why NHP was not the success everyone thought it would be, it sort of reminds me of listenning to "Get Born" by Jet, you are spotting all the influences in the songs, it sort of sounds like something else you have heard and that kind of distracts from the otherwise good music. NHP just sounds a little like a British group trying to be American and sounds like other stuff by other people which is a shame, there is some good stuff on it.

"Phenomenon" however I see as less pretentious, being UFO's third album and first for Vertigo it showcased the amazing talent of young German guitarist Michael Schenker drafted in for the erant Mr. Marsden whilst on a German tour, and that was just a stroke of genius MS's guitar licks are just plain beautiful, and while it is easy to bang on about "Doctor Doctor" and "Rock Bottom", the album as a whole has a really good feel to it, they all seem to be enjoying playing this music and then when you get to the instrumental "Lipstick Traces", well, what can I say, an absolute guitar classic penned by Schenker it is just awesome. Also look out for the cover of "Built for Comfort", a wonderful reworking of a classic song.

As good as UFO are, for my money they should have gone more bluesy, Phil Moggs voice seems to fit it, but what the hey, they produce good Brit Rock and you will not go far wrong buying their albums, yes "Phenomenon" is a signpost for greater things but do not underestimate it, it is a cracking album in it's own right.
続きを読む
6人のお客様がこれが役に立ったと考えています
違反を報告
レビュー を日本語に翻訳する

Mr Blackwell
5つ星のうち4.0 ufo takes off at last!!!!
2010年1月26日に英国でレビュー済み
Amazonで購入
After 3 pretty average disc's ,UFO-1,FLYING & LIVE,this is where the story really starts,replacing Bernie Marsden with Michael Schenker was a masterstroke or in reality a fabulous piece of luck,for it was this one move that propelled this band forward.This album is somewhat overlooked and remembered solely for the two classics that it held,namely, Docter Docter & Rock Bottom,both rightly recognised as classic heavy rock.The rest of the album tends to be overlooked which is a shame as their are some fine moments from the opening Quo riff that is 'Oh My' to the excellent 'Queen of the Deep' which closed the original album.Inbetween we get hints of wishbone ash in Schenkers playing especially on 'Space Child/Crystal light' and the occasional Quo/Free groove on others such as 'Too young too know/Time on my hands'

BONUS TRACKS: Pretty decent its good value to have the 2 non album tracks Give her the Gun/Sweet Little Thing and the unreleased Sixteen all of which fit in with the sound/style of the original album,the 2 demos i could have done without and although the live version of Docter Docter seems out of place,it does highlight just how good a live band they would be.Like all of the remasters i dont really hear too much improvement on the original discs especially the 1999 remasters.

All in all a really good disc/value for money and in hindsight not really preparing you for what came next!
続きを読む
5人のお客様がこれが役に立ったと考えています
違反を報告
レビュー を日本語に翻訳する

Steve
5つ星のうち5.0 A classic deluxe edition
2021年1月14日に英国でレビュー済み
Amazonで購入
My no1 ufo album. Brilliant to hear the album in deluxe edition with extra tracks and live show of that era.Hope all the other albums go deluxe in time.A great package
続きを読む
違反を報告
レビュー を日本語に翻訳する
すべてのレビューを参照します