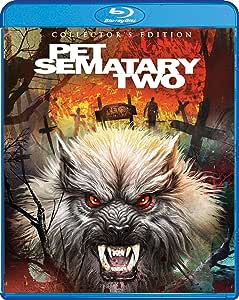 Sgt Apone
5つ星のうち1.0 Sometimes, skipping the movie all together is better
2017年10月29日 - (Amazon.com)
Amazonで購入
I put off watching this movie for years because I just knew it was going to be bad, but my god, I didn't know it was going to be this bad.The original Pet Sematary was not perfect, but it was a decent adaption of Stephen King's book and for the most part I felt like they got it right. This frigging monstrosity was a train wreck from the beginning to end. They obviously decided to make this abomination (1992) coming off of the heels of success of Terminator 2 (1991) as it stars Edward Furlong and his other terrible acting buddy in T2, Jared Rushton. You know what, while it's fresh in my memory, everyone's acting in this movie was terrible. I'm sure the script wasn't much to work with but holy crap. I can only think to waste even more of my time by making useless points of a pointless movie, so it will contain spoilers.

-The mother's electrocution at the beginning. If you've ever seen anything about electrocution, no one dies in this fashion by jerking rapidly back and forth to the object they are being electrocuted by.So corny.
-The hipster dad is no way convincing as the main character's real father
-His friend only knows the pet cemetery as an old ghost story, and yet he later magically knows that where the old burial ground is and how the ritual is supposed to be carried out.
-When the stepfather unrealistically loses his cool and shoots the dog, they take the dog to the old Micmac burial ground to bury it.They somehow effortlessly dig a grave in minutes, when in the original, the ground was so hard it took the doc all evening to dig a grave for Gauge.
-The dog comes back from the dead, but it's just like the same dog as before, just dirtier. Sometimes it growls.
-The dog attacks the stepfather at the Halloween party and instantly kills him with one bite to the neck.
-The two kids somehow drag the stepfather's dead weight lifeless 250 pound body all the way to the Micmac burial ground. When the stepfather comes back to life, he's like the same guy, just not grouchy. Pretty cool to be undead huh? Oh, and apparently still goes to work too. Sometimes he acts goofy.
-The dad has a sex dream about his dead wife.....wearing a bad dog mask. Sheesh.
-The undead sheriff for some reason digs Edward Furlong's characters mother up and totes her up to the Micmac burial ground to be buried, complete with headstone and flowers. Quite a feat. Wouldn't she have been buried back in California where she died at the beginning?
-The entire scene back at the undead sheriff's house. Just...what?
-The mother finally returns from the dead, and lo and behold, she looks like she just stepped out of the salon. Not a bad looker for being dead for months.
-Edward Furlong gets in a fight with the undead bully (who is somehow more undead that anyone else has been so far) and defeats him by sticking a live power line in it's mouth while not getting electrocuted himself.
-Some other ridiculous things happen and she decides to catch the house on fire for some reason. Father and son escape while mom decides to stand in the middle of the fire and melt (yes melt) like a bad wax figure. She has time to burn all the way to a skeleton, but the room still remains partially burning.

Why am I writing all of this? I have no idea.I guess it was just such a bad movie and an insult to the original that I couldn't help myself. How someone could consider this a good, or even ok movie just blows my mind. Yes, it is that bad.

Susie Creamcheese
5つ星のうち4.0 Great movie, I don't know what all the whining is about
2019年9月17日 - (Amazon.com)
Amazonで購入
Haha flipping through the channels on TV, I saw this and it said "Pet Sematary", I didn't see the 2 and I was like, "Is this the new Pet Sematary movie? Oh no wait, no, it can't be...that's the guy from Shawshank Redemption, and he's young, so this can't be it!" Anyway it was good enough for me to watch twice on TV, and then rent and watch twice on here, so how bad could it be? I don't want to give anything away so I won't say much more but hey it was entertaining! Okay maybe Clancy Brown made it a LITTLE better...just a little.
続きを読む
2人のお客様がこれが役に立ったと考えています
レビュー を日本語に翻訳する

SlimyboyDave
5つ星のうち5.0 AWESOME AND UNDERRATED!
2019年4月26日 - (Amazon.com)
Amazonで購入
Edward Furlong plays the main character Jeff and Jason McGuire plays Jeff's friend Drew. Clancy Brown is despisable yet unforgettable as Gus, a corrupt cop and Drew's bully stepdad. I love the first Pet Sematary but I might like this one even more. This sequel is awesome and underrated!
続きを読む

moviesrus
5つ星のうち1.0 WORST MOVIE I'VE EVER SEEN!
2017年8月9日 - (Amazon.com)
Amazonで購入
I cannot believe all the 4 and 5 star ratings on this movie. This has to be the worst movie I've ever seen. The first one was decent and scary. This was just plain stupid with bad acting, bad directing, bad script, bad effects...and the list goes on. Did they also think that we wouldn't notice that dog kept changing colors throughout the movie. LOL!. This movie was beyond bad and I love horror movies from great to low-budget if it is half way decent. Don't waste your money on this one.
続きを読む
8人のお客様がこれが役に立ったと考えています
レビュー を日本語に翻訳する
Amazon.comのカスタマーレビューを見る(236) 5つ星のうち4.0
Amazonプライム会員ならお急ぎ便、日時指定便が使い放題
さらに、映画もTV番組も見放題。200万曲が聴き放題 。クラウドに好きなだけ写真も保存可能。
> プライムを無料で試す