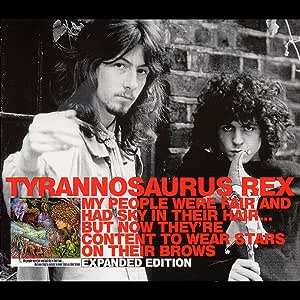 My People Were Fair & Had Sky in Their Hair CD, オリジナルレコーディングのリマスター, インポート

Jimi Jac
5つ星のうち4.0 Quite literally living the fantasy
2015年7月28日に英国でレビュー済み
Amazonで購入
This is a strange old record, I think like most Bolan fans your first introduction to the glitter ones music is through a greatest hits album, then maybe T Rex albums such as “Electric Warrior” & “Slider”.
So listening to “My people were fair” the songs almost sound like demos or work-in-progress tracks you normally get on the deluxe version of classic albums (although acoustic based, the songs have a rock structure to them, instead of a more folk style like Fairport or String Band) , fascinating but still a bit of a shock to the system, especially if you're used to tracks such as "Telegram Sam" & "I love to Boogie".

Steve B
5つ星のうち5.0 WEIRD- AND WONDERFUL
2014年1月9日に英国でレビュー済み
Amazonで購入
Marc Bolan was the kind of guy who sees a bandwagon coming, jumps aboard, and in a short time is in the driving seat. Hard to believe he made the transition from futuristic mod to hippy so effortlessly. Marc squeals and warbles fit to bust on this, the duo's debut album but the tracks are a little monotonous- until the very end when things get unexpectedly weird(er) with John Peel's reading of the (rather lovely) hippy version of Wind in the Willows followed by the knockout track Frowning Atahuallpa. "What wonders roam in the mind of a child!"
続きを読む
1人のお客様がこれが役に立ったと考えています
役に立った
フィードバックを送信中...
フィードバックをお寄せいただきありがとうございます。
申し訳ありませんが、お客様の投票の記録に失敗しました。もう一度試してください。
違反を報告
レビュー を日本語に翻訳する

Graham Spafford
5つ星のうち5.0 my people for the people
2012年10月6日に英国でレビュー済み
Amazonで購入
Well i have to say this is a brilliant re paked cd in the original cover not the chopped one from the past.the extended trackes are unreal i just love this album if your a bolan fan then you must get this cd,
the booklet is full of great info and some briliant pics of both mark and steve,
a must for any bolan fan

Mrs. N. J. Martin
5つ星のうち5.0 retro for hippies
2013年1月30日に英国でレビュー済み
Amazonで購入
If your expecting Marc Bolan /T rex sounding like 70s glam this wouldn't be the album for you, album is excellant in it's content Marc Bolan at an early stage in his career more poetry to music than the thrashing glam rock which would be more reconisible to people, but there are tracks that lead you to the next stage of Bolan evolution . A great album by the lad that was" born to boogie"
続きを読む
1人のお客様がこれが役に立ったと考えています
役に立った
フィードバックを送信中...
フィードバックをお寄せいただきありがとうございます。
申し訳ありませんが、お客様の投票の記録に失敗しました。もう一度試してください。
違反を報告
レビュー を日本語に翻訳する

Lozarithm
5つ星のうち4.0 Unlike anything before it
2005年12月19日に英国でレビュー済み
Amazonで購入
Where on Earth (or anywhere in the known multiverse for that matter) did this strangely mellifluous cacophony come from? It seemed unlike anything heard before and arrived fully formed onto the Peelian airwaves in the summer of 1968, hot on the heels of the astonishing single Debora (backed by Child Star, which was included on the album). And it was everywhere. You'd go to an outdoor free concert, or to a concert headlined by Fairport Convention, or Roy Harper, or the Edgar Broughton Band, or just about anyone, and there would be these pixies in support, sitting cross-legged on a colourful rug and declaiming a world of doors in oak trees, strange orchestras, Beethoven hair, wizards and weilders of words. Marc would be throwing back his mane and uttering throaty cries and bleats into the air, whilst confidently marshalling an army of sonic colours from his guitar, as Steve Peregrine-Took battled merrily on an array of Eastern-looking percussion instruments and added deft harmonies to Marc's lyrics as appropriate.

It is almost as mysterious now as it was then, although their influence can be heard in contemporary performers such as Devendra Banhart, and there were few clues to be had from Marc Bolan's previous work. This consisted of the two Decca singles The Wizard and The Third Degree and a single for Parlophone called Hippy Gumbo, all of which were relatively conventional moddish beat group ventures; followed by a four month stint in early 1967 with proto punk extremist mod-art band John's Children, for whom he provided lyrics and regularly beat up his highly amplified Gibson guitar with a heavy metal chain onstage, in a stage act which featured mock fights with fake blood - a far cry from Kingsley Mole.

When speaking of Tyrannosaurus Rex, Marc claimed to have been inspired by Ravi Shankar, which explains a little of the eastern influence though Ravi Shankar recordings seldom had the histrionic vocalise which featured on My People Were Fair...

As booklet note writer Mark Paytress observes, rock and roll was nearer the surface, especially on side openers Hot Rod Mama and Mustang Ford, both borrowing from the American surf and hot rod crazes of the early sixties, and The Wizard of course became re-invented as a live Tyrannosaurus Rex staple before being recorded in a third incarnation for the album T Rex.

This edition presents the album in both mono and stereo full versions. Marc Bolan was said to prefer the mono version because of mixing problems which had resulted in a thinness in the stereo version, but these problems seem to have largely overcome on this remaster so I find myself preferring the stereo half, presented as bonus tracks. These seem to be mixes of the same takes, although Dwarfish Trumpet Blues has an extra section, but the notes mention that four of the bonus tracks date from demo sessions recorded for Joe Boyd at Sound Techniques in late 1967.

The other bonus tracks consist of the single Debora (mono), which unlike the album was recorded at Advision, along with an alternate mono take; and early versions of Child Star (mono) and Chateau In Virginia Waters (stereo).

Marc Bolan went on to refine and improve the style he had introduced on this album, but no future albums could have the freshness and impact of this fearsome debut

The BlackFerret
5つ星のうち5.0 Drippy Gumbo? Hippy Dumbo?-Nope, a genuine classic!!
2004年3月21日に英国でレビュー済み
Amazonで購入
Another good reason for 1967 being a great year! 4 years before T.Rex mutated out of this, Marc Bolan's "band"(alright, his duo with Steve Peregrine Took!)debuted with this, the first of 3 great LP's. How nice the mere 1/2 hour or so is preserved on CD in it's original running order with no bonus tracks-ever thought why those outtakes or alternate takes never made it onto wax-cos they were CRAP!
This album flows through very nicely. The "band" seems to have been playing for years as they whizz through a variety of songs bound together by Marc's Vth form poetry and Steve's bongo skills and no hit singles in sight, though they did have a couple of minor ones as Tyrannosaurus Rex, with Debora and One-Inch Rock.
What's outstanding is the fairytale world within the lyrics blending like a decent choc topping on capacino with the musical flow. Also what's strictly insubstantial and disposable in fact has been an essential part of my record/tape and now CD collection 8 or 9 times in 37 years. Why? Because it kept getting played to death or nicked by thieving ex-girlfriends!
So, provided you can steer clear of the latter(one more good reason to be married to Mrs Theblackferret!!!!), CD's will allow YOU to saviour this beauty time after time. I shan't give you a track-by-track review, just recommend you buy it now-I'd like you to ride on the waves of good feeling this still generates.
As Clifton, my Beatnik cat would say, Hey, this is wowsville man-Coolio, Daddio and of this review, it's now the endest, man!!!