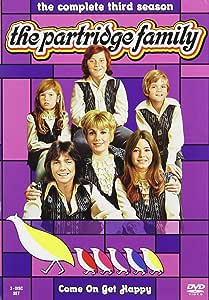 An explosion of stripes, pastels, and pure bubblegum pop music, The Partridge Family were more popular than The Brady Bunch when they were both on the air. It's easy to see why; though perhaps best known for launching David Cassidy as a pop idol, The Partridge Family merged infectious melodies with fresh writing and charming, lighthearted performances. In The Complete Third Season, the show is at its peak. The touring of a family band had largely been laid aside; the focus is on domestic life, though every episode features at least one musical number. Dating, school, and family squabbles form the bulk of the plots, but the topical issues of the 1970s crop up again and again: Some of the best episodes grapple with the battle of the sexes, permissive parenting, group therapy, and sex education (which receives a firm endorsement from this family show). Of course, there's also silliness--the family has to dress as chickens when they get hired for a commercial, an escaped convict holds them hostage in their own home--but the stories are consistently well-crafted. Furthermore, the show stands out for its willingness to puncture sentimentality. When Keith Partridge (Cassidy) runs for student body president and nobly asks the students to vote for his more qualified opponent, his younger brother and campaign manager Danny (Danny Bonaduce) disgustedly mutters, "I've molded a loser!"

The show's bedrock appeal lies in Shirley Jones' wholesome foxiness, Cassidy's genuine pop charisma (as well as his willingness to be the butt of a joke), and Bonaduce's caustic preadolescent deadpan. But Susan Dey as oldest sister Laurie became a key player this season, demonstrating the charm and wit that would lead her to further stardom on L.A. Law (she also gets the most spectacular outfits--check out the red plaid jumpsuit she wears in the escaped convict episode!). Guest stars include such classic 1970s support players as Bert Convy, Mary Ann Mobley, and Nancy Walker; future sitcom stars like Gordon Jump (WKRP in Cincinnati) and Charlotte Rae (Diff'rent Strokes, The Facts of Life); and even future movie stars like Jodie Foster, who punches Danny in the eye when he tries to kiss her. The Partridge Family was a winning show, clever, cheerful, and actually funny. Regrettably, there are no audio commentaries or interviews with the cast. --Bret Fetzer

Laurie's in love. Danny's in trouble. Shirley's in debt. And Keith is flunking sex education! These are just a few of the hijinks that take place in the celebrated third season of TV's beloved The Partridge Family! Join Academy Award-winner Shirley Jones (Actress in Supporting Role 1960 for Elmer Gantry) and America's original idol, David Cassidy, with Susan Dey, Danny Bonaduce, Dave Madden, and the rest of the talented cast as pop's first family meets a princess, a convict, a biker, and a millionaire while taking on rogue computers, racehorses, crooks, crushes, and even a flash flood! With an all-star guest cast taht includes Ray Bolger, Arte Johnson, Anthony Geary, John Astin, and a very young Jodie Foster, The Partridge Family: The Complete Third Season is your backstage pass to life, love, and laughs with the tuneful, terrific Partridge Family!

Western Fan Gal
5つ星のうち5.0 Partridges still entertain me
2008年12月7日に英国でレビュー済み
Amazonで購入
What a delicious slice of Americana all of the Partridge Family tv shows are - forget those who scoff at pure entertainment and push the credit crunch to the back burner....sit down and prepare to enjoy the show all over again...if you didn't see it back in the early 70s, you really don't know what you have been missing.

The music was always terrific pop - never pretending to be anything else but entertainment - most of the songs hold up well, and make today's so called music extremely forgettable

What is funny, and adds to rather than detracts,from the show's appeal, is watching the younger kids "playing" instruments and miming along - those of us old enough to remember can recall that the Partridge music was actually sung by David Cassidy, Shirley Jones, and some very good professional adult singers

David Cassidy, was of course, a huge star, and while the programme launched him on the world, coping with the problems of fame must have been tough, even with his family's showbiz background. That he is still performing in shows and musicals to this day show how this particular teen heart-throb, despite numerous difficulties, has lasting appeal for audiences

Mother Shirley Partridge is portrayed by the wonderful musical star Shirley Jones, who also made many non-musical films and tv in her long career. She was,of course, David Cassidy's real-life step-mother, and mother of Shaun Cassidy, who viewers may remember from the Hardy Boys on tv

Plots are reminiscent of the Brady Bunch about pre-teen and teen concerns - usually lighthearted stuff. Some of the-then attempts at political correctness are worthy tries, which don't quite come off, but there's no need to be hindsight-judgemental. There is nothing that can offend anyone here

As for the fabulously funny Dave Madden - I used to roar at "Mr Kinkaid" back the first time around....he seems, in retrospect, more comical than ever - his exchanges with the 11 year old Partridge family wunderkind, Danny, are hysterical

Well worth adding all the available series to your collection

T
5つ星のうち5.0 Partridge Family Third Season
2013年5月12日に英国でレビュー済み
Amazonで購入
A wonderful slice of wholesome entertainment from the early seventies.So many great songs and David Cassidy had become a huge solo artist while continuing to appear in the show.Unfortunately,the producers decided to introduce the nausea inducing 4 year old Ricky Segall into the fourth and final series,making this 3rd series the last one you can watch all the way through without reaching for the sick bucket and fast forward on the remote control.
続きを読む
3人のお客様がこれが役に立ったと考えています
役に立った
フィードバックを送信中...
フィードバックをお寄せいただきありがとうございます。
申し訳ありませんが、お客様の投票の記録に失敗しました。もう一度試してください。
違反を報告
レビュー を日本語に翻訳する

Denise
5つ星のうち5.0 The Partridge Family: Season 3
2013年6月10日にカナダでレビュー済み
Amazonで購入
I remember how I used to love THE PARTRIDGE FAMILY TV series.
Back then, I had tried it because David Cassidy was in the series.
THE PARTRIDGE FAMILY is a very charming family comedy and
a whole family in show business was and still is different.
I had not seen this series in years and am very happy I bought it.
I can see now more clearly how hard they tried to pull the rug from
under David Cassidy’s feet so to promote Danny Bonaduce’s career...he must have had a great agent or very aggressive parents :)... but he really is a good actor so we can easily live with this situation :)
I had no problem with any of the disks and I have every intention of purchasing the whole series.
It’s so much fun to have a store like AMAZON where you can buy in all peace of mind.
続きを読む
役に立った
フィードバックを送信中...
フィードバックをお寄せいただきありがとうございます。
申し訳ありませんが、お客様の投票の記録に失敗しました。もう一度試してください。
違反を報告
レビュー を日本語に翻訳する

Lucio
5つ星のうち5.0 Love the shows and the quality
2013年4月8日にカナダでレビュー済み
Amazonで購入
After all these years, it's a pleasure to be able to see these greatly written shows in excellent quality. I would have liked a special disc with just the songs but we can't have it all in life.
続きを読む
1人のお客様がこれが役に立ったと考えています
役に立った
フィードバックを送信中...
フィードバックをお寄せいただきありがとうございます。
申し訳ありませんが、お客様の投票の記録に失敗しました。もう一度試してください。
違反を報告
レビュー を日本語に翻訳する

Hope Green
5つ星のうち5.0 love it
2009年11月6日にカナダでレビュー済み
Amazonで購入
I bought these DVDs so I could enjoy strolling down memory lane. I watches all of them over several weeks...not wanting to finish them all too too quickly. I enjoyed each and every show. Life was oh so simple in the 70s.
続きを読む
2人のお客様がこれが役に立ったと考えています
役に立った
フィードバックを送信中...
フィードバックをお寄せいただきありがとうございます。
申し訳ありませんが、お客様の投票の記録に失敗しました。もう一度試してください。
違反を報告
レビュー を日本語に翻訳する