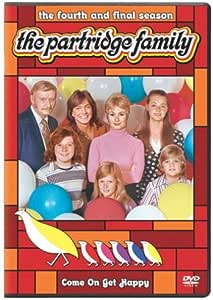 Danny Bonaduce was always The Partridge Family's not-so-secret weapon. His cheerful money-grubbing ways provided an antidote to the smug homilies and treacly heartwarmingness that afflicted so many sitcoms of the early 1970s. His prepubescent cynicism was never more needed than in The Partridge Family's fourth and final season, when recycled plots and forced gaiety began to seep in. The biggest red flag was, of course, the addition of an adorable precocious tot: Ricky Segall, a four-year-old neighbor who brought too many episodes to a screeching halt with his cloying children's songs. The rest of the cast had to sit and beam adoringly at this festering harbinger of a Partridge apocalypse. Fortunately, Segall was soon reduced to appearing at the tail end of episodes and the show's dependable virtues rallied: David Cassidy's teen idol charisma, Shirley Jones' improbably wholesome sex appeal, Susan Dey's feisty feminism, the goofy mix of bubblegum music and borscht belt comedy, and Bonaduce's froggy sarcasm. Odd patterns dominate the fashion trends, Jones wears maxi-dresses and some bizarre brightly-colored wimples--and everyone's hair has become startlingly ornate (Keith's puffy mullet is a force to be reckoned with). Guest stars include an abundance of future TV stars--like Pat Harrington (One Day at a Time), Robert Mulligan (Soap), and Cheryl Ladd (Charlie's Angels)--as well as movie stars old (Margaret Hamilton, The Wizard of Oz) and new (Jackie Earle Haley, a few years away from stardom with The Bad News Bears). So despite some signs of age and impending cancellation, the fourth season still holds many pleasures and should not be missed by fans. --Bret Fetzer

More musical adventures with TV's favorite rock 'n roll family! The family tries (unsuccessfully) to conserve energy. Laurie poses as Keith's date to make other girls jealous, but the plan backfires. Danny wants to impress a girl by telling her rabbi father that the Partridges are Jewish - and the whole family is invited to dinner. Shirley tries to hire a maid, but it's all in the family when her mother shows up to apply.

music man
5つ星のうち4.0 Partridge Family
2010年12月2日に英国でレビュー済み
Amazonで購入
I have recently purchased all 4 seasons of The Partridge Family off Amazon.I remember watching the Partridge Family on TV when first aired in the 1970s.Watching them again all these years later and I still find them enjoyable to watch.The songs still remain as catchy as ever.A lot of music from that time, the early 70s seems dated now ,the Glam Rock era doesn't come across well in the 21st century.However the Partridge Family music does.The stories revolve around the family working together as a family to resolve the situations that they find themselves in.This time round watching it I notice the comedy element that exists between the characters played by Dave Madden(Reuben) and Danny Bonaduce (Danny) which is great as it complements the Shirley Jones and David Cassidy characters.
続きを読む
4人のお客様がこれが役に立ったと考えています
役に立った
フィードバックを送信中...
フィードバックをお寄せいただきありがとうございます。
申し訳ありませんが、お客様の投票の記録に失敗しました。もう一度試してください。
違反を報告
レビュー を日本語に翻訳する

Alexander Greer
5つ星のうち5.0 Retro Flashback
2020年4月9日にカナダでレビュー済み
Amazonで購入
After I came home from Cubs on Monday (or was it Tuesday?) evenings I would watch "The Partridge Family." Then after school I saw it in syndication. There was always laughs in this 1970s musical family. Good that I can watch the episodes when I can.
続きを読む
役に立った
フィードバックを送信中...
フィードバックをお寄せいただきありがとうございます。
申し訳ありませんが、お客様の投票の記録に失敗しました。もう一度試してください。
違反を報告
レビュー を日本語に翻訳する

Lucio
5つ星のうち5.0 Possibly the best season for me
2013年4月8日にカナダでレビュー済み
Amazonで購入
I think the characters were all well developed and beyond the initial 'cuteness' of season 1. If only the show continued another 2-3 years, it would have been a classic like the Waltons or Cosby.
Recommended for the great writing and excellent picture/sound
続きを読む
2人のお客様がこれが役に立ったと考えています
役に立った
フィードバックを送信中...
フィードバックをお寄せいただきありがとうございます。
申し訳ありませんが、お客様の投票の記録に失敗しました。もう一度試してください。
違反を報告
レビュー を日本語に翻訳する

Mr Doug Gordon
5つ星のうち5.0 The End Of An Era!
2009年3月29日にカナダでレビュー済み
Amazonで購入
Like I wrote in my review for Season 3 of "The Partridge Family", it was great to see that Sony/Columbia has released Seasons 3 & 4 after a 2 year absence. The picture quality of the shows is very good, but doesn't state on the back of the box that it was mastered in high definition like Season 3. It still looks and sounds great. Like Season 3, Season 4 does not have any added features. Just the shows, and that's about it. It seemed like there was a lot of production put into Seasons 1 & 2, but Season 3 & 4 are very basic. Even with this, it's great to finally have the complete run of this early '70s classic TV show.
続きを読む
2人のお客様がこれが役に立ったと考えています
役に立った
フィードバックを送信中...
フィードバックをお寄せいただきありがとうございます。
申し訳ありませんが、お客様の投票の記録に失敗しました。もう一度試してください。
違反を報告
レビュー を日本語に翻訳する

kermit68
5つ星のうち4.0 A good Watch
2009年4月15日にカナダでレビュー済み
Amazonで購入
Season 4 - the final season is great to watch like the other seasons. The only thing i didn't like was that they had the neighbour kid sing at the end of every episode. That to me was a waste of time and I'm not sure what the producers were trying to accomplish with that. Other than that, season 4 was great. They don't make em like they used to, this show actually had kids using manners, helping others and teaching some good values along with the humourous antics we've come to enjoy from the Partridge Family.
続きを読む
4人のお客様がこれが役に立ったと考えています
役に立った
フィードバックを送信中...
フィードバックをお寄せいただきありがとうございます。
申し訳ありませんが、お客様の投票の記録に失敗しました。もう一度試してください。
違反を報告
レビュー を日本語に翻訳する

T
5つ星のうち4.0 Partridge Family Season 4
2012年12月22日に英国でレビュー済み
Amazonで購入
I would love to write a glowing review of this box set,but unfortunately I can't due to the fact that the discs will not play on my DVD player. I have bought many Region 1 discs from the U.S,including the first 3 seasons of this very programme,without any problems.
Just wanted to warn anyone considering buying this to double check for compatibility.

Update.... I was able to play the discs on my laptop and have watched enough episodes to give a proper review. So far,this season is on a par with the first three,with one big(or should that be small?) exception. Who was responsible for the introduction of the unbearable Ricky Segall, as the four year old neighbour who is never away from the Partridge house and gets to sing a toe curling,vomit inducing ditty on every episode he appears in? I've had to resort to fast forwarding the disc everytime he appears on screen. Totally spoils the show for me, hence the deduction of one *.
続きを読む
1人のお客様がこれが役に立ったと考えています
役に立った
フィードバックを送信中...
フィードバックをお寄せいただきありがとうございます。
申し訳ありませんが、お客様の投票の記録に失敗しました。もう一度試してください。
違反を報告
レビュー を日本語に翻訳する

DisneyDenizen
5つ星のうち5.0 ONE OF THE BEST SITCOMS OF ITS TIME
2019年1月20日にアメリカ合衆国でレビュー済み
Amazonで購入
I was born in 1961. I grew up on sitcoms. If future historians want to understand someone my age, this is a good place to start:

The Brady Bunch (1969-1974) taught me (the only child of a single parent) what life in a large blended happy family would theoretically look like. Without siblings of my own, I was glued to the comings and goings of life in the Brady household. With hindsight, the show is very much a product of its times, ergo at times surprisingly sexist. The very set up of Carol Brady moving back in with her parents until she could find a man to marry her and support her again is sexist. And yet the show maintains a friendly family vibe, a household within which every problem could be solved within half an hour. It was worth watching then. It’s worth watching now. (My kids’ take: Fun but too sexist. Still, they’ve watched most of the episodes.)

The Partridge Family (1970-1974) gave me (and every other girl my age) my first crush: David Cassidy. Dreamy. A fun family drama with music, this show catapulted young David Cassidy to international superstardom. (My kids’ take: Not only worth watching, but excited to see David Cassidy live the twice we had the opportunity.)

I Dream of Jeannie (1965-1970) was a fun show which taught what happens when a man doesn’t treat the woman he lives with as an equal.
- Tony thought he was in charge.
- Tony issued orders.
- Jeannie said, “Yes, master!”
- Jeannie did whatever she wanted.
Use of magic was forbidden. Use of magic was constant. Sidekick Roger Healy, who understood the value of having a personal genie and was forever trying to benefit from Tony’s genie, was a standout. (My kids’ take: Amused by it but not enough to watch all of the episodes.)

Bewitched (1964-1972), like I Dream of Jeannie, challenged the whole Father Knows Best assumption that a man was ultimately in charge of the household his wife was running. Again, magic was forbidden, yet it was constant. Samantha’s relatives dropped by unannounced with alarming frequency. Darrin was frequently the butt of some magic incantation or other. And to top everything off, most episodes ended with Samantha saving her husband’s advertising job by coming up with the perfect slogan. The only real question was why a cool woman like Samantha would confine her limitless possibilities to live life with the very mortal exceedingly dreary Darrin Stevens. Still, I loved the endless cast of characters. I also learned some history from Bewitched, which introduced me to Napoleon, among others. (My kids’ take: Amused by it but not enough to watch all of the episodes.)

Gilligan’s Island (1964-1967) is the most hilarious of the bunch and the only one to have successfully withstood the test of time. It is every bit as funny now as it was back then. (My kids’ take: Absolutely loved it. Watched every episode multiple times.)