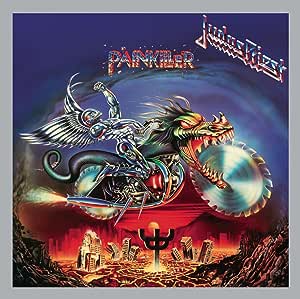 Brixham
5つ星のうち1.0 Think twice on the vinyl version
2020年2月20日に英国でレビュー済み
Amazonで購入
This is a great album by a tremendous band. However this is a really poor piece of vinyl. Thr pressing is messy causing the production to sound confused with a poor mix and poor sonic range. Dont know what was used to master it but I have no hesitation in saying that this is the worst lp I have for sonics and channel separation. Most new vinyl is profoundly crap indeed. Paid £12k for my system to have it sullied by this dross. Not Priest's fault. Songs are brilliant. Get the digital versions.
続きを読む
違反を報告
レビュー を日本語に翻訳する

Bertie
5つ星のうち5.0 What a shot at glory!
2015年1月8日に英国でレビュー済み
Amazonで購入
Painkiller was my first experience of Priest back in 1990 and my pretty worn out cassette stands testament to how much I loved the album at the time.

Some 24 and a bit years on, I still love this album and rate it as a Priest classic. It's decidedly more aggressive than anything they had put out previously with the band seemingly fired up and bursting out the speakers with a new lease of life. Maybe it can attributed to Scott Travis' harder drumming which features more prominent use of the double bass pedal or maybe the band wanted to compete with fresher heavier bands at time. Either way, they came out all guns blazing and this album is a barnstormer. Lyrically it's not their finest hour, it's typical, silly OTT metal but who cares when it's this enjoyable. I don't think I could ever tire of 'Nightcrawler' and 'Between the Hammer and the Anvil' back to back and 'One Shot at Glory' is a great end piece.

The 'Import' CD I have ordered here is actually the older version prior to the 2001 remastered editions with the bonus tracks. I wanted this one simply because the mastering is so much better - the remastered version is a very harsh sounding, dynamic range compressed disc. This is much more listenable, just a bit quieter. Crank it up and it sounds much better.
続きを読む
1人のお客様がこれが役に立ったと考えています
違反を報告
レビュー を日本語に翻訳する

Kingcrimsonprog
5つ星のうち5.0 Judas Priest - Painkiller
2011年8月2日に英国でレビュー済み
Amazonで購入
Judas Priest's Painkiller album was released in 1990 and has since went on to become a classic album, hugely respected and often included in lists of `best-ever-metal-albums.'

For a Judas Priest record, Painkiller is very fast and heavy. Drummer Scott Travis brought a new injection of energy to the band and the material is very hard, fast and Thrash Metal influenced. Painkiller as an album is full of thundering double kicks, buzzsaw riffs and of course the highest standard of guitar solos.

Along with the renewed energy from the band, singer Rob Halford pushes himself to his very limits on this album. At points it seems as if he is trying to win some sort of world record with his high-pitched screams.

The quality of songwriting is excellent and there is no filler or weaker tracks. Songs like `Metal Meltdown,' `One Shot At Glory,' and `All Guns Blazing,' are all furiously energetic; Priest really delivered a supremely strong and exciting record with Painkiller.

`A Touch Of Evil,' slows the pace a little and adds some variety to the proceedings, with keyboards from Dio/Ozzy/Deep Purple's Don Airey. The track is really powerful and when all the music climaxes and Rob delivers the line `You're Possessing Me,' I never fail to break out in a big grin.

Overall, Painkiller is a fantastic album from start to finish. Atypical of the usual Judas Priest style, but utterly essential to anyone who likes metal nonetheless.
続きを読む
2人のお客様がこれが役に立ったと考えています
違反を報告
レビュー を日本語に翻訳する

F. Camilleri
5つ星のうち5.0 Easy Review: Classic Album
2009年12月2日に英国でレビュー済み
Amazonで購入
This is an easy review to write. If you're a JP fan, then you already know how good this album is, and you want to see what other fans have to say about it. If you're new to JP, perhaps a young one exploring the great metal bands, then you cannot go wrong if you listen to Painkiller: get it and prepare yourself to keep listening to it for quite some time.

With Painkiller, JP were back to their heavy metal 'orchestral' shape: the rick texture of their guitar sounds, interwoven with harmonic riffs, melodic guitar solos, and Halford's voice, accompanied by the pumping drums and bass that take off at a searing pace with the the opening two tracks: Painkiller and Hell Patrol.

It's very difficult to weed out a weak track in this album. My other favourite tracks are All Guns Blazing and Night Crawler: pure classic class!

GT500
5つ星のうち4.0 So glad I bought i.
2017年3月2日に英国でレビュー済み
Amazonで購入
Just like I remembered it. I spent a great deal of time listening to them in my late teens and still enjoy their music today, this album brought back the memories. In my opinion it's one of their best albums, not that the others aren't any good.
続きを読む
1人のお客様がこれが役に立ったと考えています
違反を報告
レビュー を日本語に翻訳する
すべてのレビューを参照します
Amazonプライム会員ならお急ぎ便、日時指定便が使い放題
さらに、映画もTV番組も見放題。200万曲が聴き放題 。クラウドに好きなだけ写真も保存可能。
> プライムを無料で試す