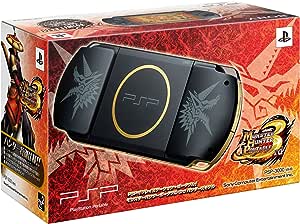 Chiahzs
5つ星のうち4.0 Great device , but dead battery
2018年2月25日にアメリカ合衆国でレビュー済み
Amazonで購入
quick info about me: had a psp2000 before but later donated to the children's home.Saw this a few years later and wanted to relive my childhood.

Probably one of the better looking psp ever, if not the best.Bought it from ORIDURU. everything is included in the box ,i.e: psp charger (Japanese variant,but an adapter would solve the problem) ,psp ,extended battery 2200mah and manuals in Japanese.Due to the custom regulations,they had no choice but to install the battery before shipping.The psp itself is without scratches and is new.however, the battery is dead and could not charge.Psp power led blinking orange when charged.This is probably due to the fact that it was launched in 2010,so it makes sense that the battery failed.Had to replace it with a lower capacity battery and it worked.
There are a few differences between this and the normal psp 3000.The MHB psp has a larger battery, and the back of the device is not flat like the normal variant.Both sides bulges, allowing better grip and comfort(similar to psp1000s but probably better)The analog nub is not flat too,as it curves inwards and does not try to murder your thumb every 5 minutes when playing.The speakers are not rounded rectangle, and are circle-shaped.it resembles the cat's paw,which is a neat touch.It also has a one-of-a-kind theme,which adds to the monster hunter experience.
For those who are interested in homebrew,the psp module checker said that it is a PSP 3000,04g version.This means that u can update the firmware to 6.61(shipped with 6.35) and then install infinity and cfw.Btw,since it is a Japanese PSP,selecting items in xmb is done by pressing O.Luckily this can be changed back to X through the recovery.Plus it is super easy to mod,this is my first time doing so,so yea don't screw up.Google hackinfomer,Reddit and wololo and follow the guides.

tl;dr:Overall, great device to add to the collection ,too bad the original battery died.Great device for emulating.Good luck with finding original batteries since Sony stopped their production long ago.Make sure u get a memory stick since it wasn't included.Oh ,btw the price inflated like 30usd a week after my purchase,get it while u can.Enjoy.
続きを読む

Yoshi
5つ星のうち5.0 I would very much recommend buying an extra battery for the system
2016年9月4日にアメリカ合衆国でレビュー済み
Amazonで購入
I hope to make this as concise as I can, but I adore this system. As a bit of background, I have had the standard Playstation portable systems since they were released, and this is my first run with this monster hunter variant.

The system itself is the same size and has the same functionality as the vanilla PsP, but it does have a a few differences that makes it worth picking up. Instead of the usual glossy finish, this system has slight rubbery finish that helps grip the system. The control nub is grooved, and has more of a grip than the usual control stick. Think ps4 analog sticks compared to ps1.

The system does come with the stock Japanese button mapping, so the circle button proceeds and the x button cancels, so this may be a bit of a learning curve if you aren't used to it.

The system does not come with a memory stick, so you may need to buy one if you don't have one already.

As well, the battery that came packed with the system was unable to charge, leaving the system with a orange blinking whenever I tried. Luckily I have an extra. I would very much recommend buying an extra battery for the system, because the batteries tend to run dry on long trips.

Over all I have loved this system so far, and I know I will hold onto it for a long time to come.

Cons
- Came with a battery that wouldn't charge. (I recommend buying backup batteries anyway)
- UMD movies ARE region locked. (If that's your thing)
- Did not come with Memory stick. (I would recommend upgrading even if it did to be honest.)
続きを読む
6人のお客様がこれが役に立ったと考えています
役に立った
フィードバックを送信中...
フィードバックをお寄せいただきありがとうございます。
申し訳ありませんが、お客様の投票の記録に失敗しました。もう一度試してください。
違反を報告
レビュー を日本語に翻訳する

Alexandr
5つ星のうち5.0 - More comfortable stick then in ordinary PSP
2018年1月29日にアメリカ合衆国でレビュー済み
Amazonで購入
Pros:
- Gorgeous mate finish body.
- Extended 2200mAh battery оut of the box.
- Body is symmetric and comfort to grip.
- More comfortable stick then in ordinary PSP.
Cons:
- Screen 'burnout' defect (Mine was gone in about a month)
May not like:
- In menu 'X' is cancel and 'O' confirm and that can't be changed without using custom firmware's.
- Because it has 2200mAh battery body is little bigger, so it will not fit standard cases.

At first there was a small brighter line in form of rectangle. It was visible on some colors, mostly dark ones. Played for a few weeks, then put it to desk for about a month. It was a big surprise when got it out that there was no trace of burnout line. So if you got one on yours brand new PSP don't panic. If you don't want or can't return it - just give it some time. But maybe was just lucky.
続きを読む
2人のお客様がこれが役に立ったと考えています
役に立った
フィードバックを送信中...
フィードバックをお寄せいただきありがとうございます。
申し訳ありませんが、お客様の投票の記録に失敗しました。もう一度試してください。
違反を報告
レビュー を日本語に翻訳する
その他の国際レビューを読み込む

Renzo_Fox
5つ星のうち5.0 Just imported from Japan to Alaska...5 stars!
2013年3月16日にアメリカ合衆国でレビュー済み
Amazonで購入
I don't know what I am more impressed with, the seller and condition of the PSP or the PSP itself. Let's first talk about the PSP.

PSP system: As an avid Monster Hunter fan, this is a freakin' DREAM COME TRUE. First off the battery pack is larger and will last much longer. The concave analog is MUCH better for any and every game. I wish the PSP originally came with this. If you are importing to the US or anywhere outside of Japan and are worried about the language barriers, worry not. The initial setup asks which language you would like and English was one of them :) Depending how you plan to use this system you should know that the games should play just fine but the UMD movies are region encoded. I am planning on placing custom firmware on this so I can play Monster Hunter Portable 3rd with the English patch. Overall the system feels much more sturdy and with the non-glossy matte finish, you won't be getting as many fingerprints on the system. The system is the definitive version of any PSP (it is a PSP-3000 model) and the fact that it is Monster Hunter themed makes all the better. 10/10 on the system itself.

Seller Feedback: The system was listed as used and a 'very good' condition listed. I was expecting a used PSP with scratches and maybe some paint missing from the decals and no box. What I received was the system in the original, mint condition box. It was opened but I am sure the system itself was hardly played if at all. The charger was still unused and manual was in unopened plastic. The PSP was flawless and in its original packaging. I assumed the worst and received mint. The shipping was quick too. It came 2 whole weeks before its projected arrival.

Final verdict: 5 stars. For the product and the seller. If any US importers are worried about buying this, then worry not. The included Japanese charger works with American plugs and if you don't receive the Japanese charger then an American one will work all the same. I did some research into it and there are no worries. Any Monster Hunter fan with a little extra cash would do well to throw it down on this. Well worth it.
続きを読む
12人のお客様がこれが役に立ったと考えています
役に立った
フィードバックを送信中...
フィードバックをお寄せいただきありがとうございます。
申し訳ありませんが、お客様の投票の記録に失敗しました。もう一度試してください。
違反を報告
レビュー を日本語に翻訳する

JonWIl
5つ星のうち2.0 Cool model
2016年7月7日にアメリカ合衆国でレビュー済み
Amazonで購入
Ordered from weee. Console is in bad shape. Paint missing from back. Screen is pretty badly scratched. Buttons stick. But the model itself is great the falt black is awesome and the improved analog is great. The console can be set to use english and you can even swap the O and X buttons if that annoys you. I just wish mine was better
続きを読む
3人のお客様がこれが役に立ったと考えています
役に立った
フィードバックを送信中...
フィードバックをお寄せいただきありがとうございます。
申し訳ありませんが、お客様の投票の記録に失敗しました。もう一度試してください。
違反を報告
レビュー を日本語に翻訳する

Chris kut the beam
5つ星のうち5.0 Best retro game system ever
2019年3月11日にアメリカ合衆国でレビュー済み
Amazonで購入
The best handheld game system ever for emulating retro games I recommend infinity custom firmware to run games best of all the thumb stick nub fits your thumb inside of it and therefore makes thumb stick games much more satisfying. Get this psp and don’t get any other kind of limited edition🤩😍
続きを読む

Aside from a few scratches on the glass screen, everything works great. Buttons feel like they haven't been used much and everything functions properly.
続きを読む
役に立った
フィードバックを送信中...
フィードバックをお寄せいただきありがとうございます。
申し訳ありませんが、お客様の投票の記録に失敗しました。もう一度試してください。
違反を報告
レビュー を日本語に翻訳する

Charlie
5つ星のうち1.0 Do not buy from third party seller
2018年2月24日にアメリカ合衆国でレビュー済み
Amazonで購入
Did not come as described, fraudulent.
続きを読む

lE3Ch lAtuyA
5つ星のうち5.0 trying to wake up, but i don't want to.
2013年4月25日にアメリカ合衆国でレビュー済み
Amazonで購入
have been looking for this particular model for a while. i finally found it at a price that was INSANELY LOW!. There was mix up during delivery which was to be expected being that it's in japan. but i received an email from them stating that they refunded me the cost of priority shipping. top notch! top class!. well i got the system to day and i was going out of my mind!. it's in beautiful mint condition they could have sold me this stating it is brand new. even the box is mint! Because of all of this they have won over me allegiance and will now buy from no one else when it comes to imports from japan, no joke!.

oh BTW Guys, keep an eye out for the monster hunter version that the psp model is blue and white.
(i'm going to be so broke)
続きを読む
3人のお客様がこれが役に立ったと考えています
役に立った
フィードバックを送信中...
フィードバックをお寄せいただきありがとうございます。
申し訳ありませんが、お客様の投票の記録に失敗しました。もう一度試してください。
違反を報告
レビュー を日本語に翻訳する

The system got here a day earlier than Amazon anticipated, which is amazing, and it was at a great price considering it's an import from japan.

My only problem with it is that the seller stated that it was in "Very Good" condition, when it was closer to "Good" condition rather than "Very Good". There were a few very noticeable scratch marks on the screen, most of which are not visible when the system is on, but there was one in the lower right of the screen that is still visible and blurs the screen a bit, which is a little irritating, but nothing I can't deal with.

Ryan Marion
5つ星のうち5.0 Exactly as described
2018年7月22日にアメリカ合衆国でレビュー済み
Amazonで購入
Was in mint condition like the description said everything works great even came already in English language not Japanese. I asked about the product before buying and the resource team responded quickly to assure me it was in great condition very helpful.
続きを読む
役に立った
フィードバックを送信中...
フィードバックをお寄せいただきありがとうございます。
申し訳ありませんが、お客様の投票の記録に失敗しました。もう一度試してください。
違反を報告
レビュー を日本語に翻訳する

Kevin Dougherty
5つ星のうち5.0 The definitive PSP
2013年12月22日にアメリカ合衆国でレビュー済み
Amazonで購入
The Playstation Portable Monster Hunter 3rd Hunters Model [Japan Import] must surely be the definitive PSP. The fusion of optimal styling and long-play battery make for a peerless experience. The used import I purchased, at a fraction of the price of new, was described by the Seller as of "good" condition ... that which I received however was a pristine unit, in pristine original packaging, with all factory accoutrements.
続きを読む
3人のお客様がこれが役に立ったと考えています
役に立った
フィードバックを送信中...
フィードバックをお寄せいただきありがとうございます。
申し訳ありませんが、お客様の投票の記録に失敗しました。もう一度試してください。
違反を報告
レビュー を日本語に翻訳する