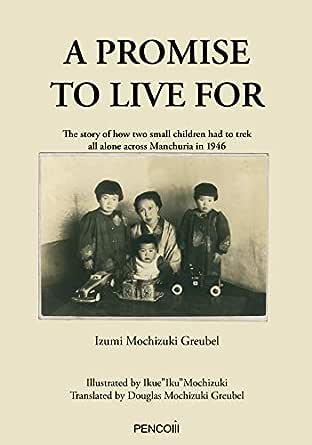 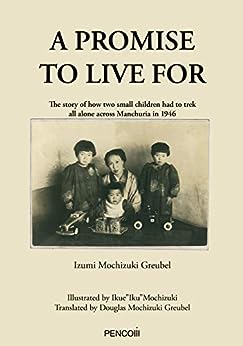 A PROMISE TO LIVE FOR (English Edition) Kindle版

Izumi was born and raised in Shizuoka-city, Japan. After graduating from university in Japan, she attended a graduate school in the United States and received a Master's degree in secondary education. She taught Japanese at the University of Southern Indiana for ten years until her husband, Tony, was hired by the U.S. Department of State. Since then, they have lived in Washington, D.C., Indonesia, Canada, Pakistan/Japan, China, and Samoa. Izumi and Tony have two sons, Douglas at Virginia Tech (class of 2018) and Christopher at the U.S. Naval Academy (class of 2021).

Ikue was born in Shizuoka-city, Japan, in 1936. She moved to Manchuria when she was six years old with her family due to her father's job as a civil engineer. She was nine years old when World War II ended in 1945. She and her little brother came back to Japan from Manchuria in 1946 by themselves after a one-month long dangerous journey. She married her husband, Takao, and they raised three children, Izumi being the first child.
They also have five grandchildren; one of the five, Douglas, translated the original Japanese edition of this book into English. Ikue is living in Shizuoka-city, Japan with her husband enjoying their retirement.

Douglas was born in Evansville, IN, in 1996, and moved to VA/DC when he was 5 due to his father's job. As a foreign service kid, he attended Mt. Daniel Elementary School in Falls Church, VA, Surabaya International School in Indonesia, Turnbull School in Canada, Matsuno Elementary School in Japan, Robinson Secondary School in Fairfax, VA, and graduated from International School of Beijing in China. After high school, he attended Virginia Polytechnic Institute and State University (Virginia Tech) and earned his undergraduate mechanical engineering degree in May, 2018. He will start working for Ford Motor Co., in September, 2018 as an engineer. He and his younger brother, Christopher, were raised bilingually in Japanese and English at home. He enjoys working on cars, scale models, and the outdoors.
--このテキストは、tankobon_hardcover版に関連付けられています。

Amazon カスタマー
5つ星のうち5.0 Great book
2018年10月8日に日本でレビュー済み
I must say that this story is fascinating, as well as both beautifully illustrated and written. Moreover, I learned a great deal about World War II that I never knew had taken place. It is sad that Iku's mother passed away so young, but her spirit truly remained with Iku and Kiyoshi as they bravely carried forth toward Shizuoka, and I was always grateful when their father made it home safely.
続きを読む
役に立った
違反を報告
レビュー を日本語に翻訳する
すべてのレビューを参照します
click to open popover
トップへ戻る
Amazonについて
Amazonでビジネス
Amazonでのお支払い
ヘルプ＆ガイド
日本語ショッピングのための言語を選択します。 日本ショッピングのための国/地域を選択します。
© 1996-2020, Amazon.com, Inc. or its affiliates