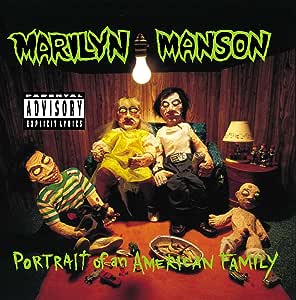 PORTRAIT OF AN AMERICAN F

Every parent's nightmare and every teenager's dream band, Marilyn Manson take no prisoners on their blistering and brutal Trent Reznor-produced debut. Aiming to shock and rock simultaneously, Portrait scores high marks in both arenas. Manson and his grand grimoire take Alice Cooper's tongue-in-cheek mix of glam and death rock to the nth degree with their vision of youth gone wild, personified on cuts like "Cake and Sodomy" and "Lunchbox", a schoolyard revenge fantasy gone horribly awry. One of the most original, hardest rocking albums recorded in the 1990s, Portrait of an American Family is a hallmark of the industrial/metal genre, but not for those who are easily offended. --Gail Worley

S. Lornie
5つ星のうち5.0 Better than I remembered
2018年6月29日に英国でレビュー済み
Amazonで購入
Thinking back to 1994 when Portrait of an American Family was released, there was a lot of crap floating around. The world was still sucking on the heroin doused grunge rock leaving rock music without any form of glam or fun. That was until a little unknown group called Marilyn Manson appeared out of no where with an impressive début album. Much like the music of the ’80s or the disco days of the ’70s, it is dated but whether it has aged well or not is a different story altogether.

Marilyn Manson had to start somewhere and it is an interesting album to go back to. Portrait of an American Family in comparison to Manson’s later work is a bare bones but respectable piece of music. It is a lot more down to earth and not quite as far out as you’d expect. Sure the lyric content is all over the place and is sure to offend what we now call social justice warriors. But in retrospect, Portrait of an American Family is a lot tamer than the albums reputation claims.

Musically I think Portrait of an American Family has held up quite well. The songs are all very consistent and the momentum of the album flows perfectly. The eerie weird vibe is maintained through out and it really makes for a fun listen. The production by Trent Reznor is very well done. There is no obsessive use of distortion and overdrive. Each instrument is crystal clear and is very well mixed together.

When you think about what was coming out at the time, you realise how far ahead of the crowd Marilyn Manson was. Portrait of an American Family is much better then anything Korn and those other (soon to be) Nu-Metal/Industrial bands were chugging out at the time, even if it is a little dated. Saying that, as good as it is, it isn’t up to the standards of classics like Anti-Christ Superstar and Holywood.

DH
5つ星のうち5.0 Classic for MM fans!
2007年8月21日に英国でレビュー済み
Amazonで購入
First of all I would like to say if you are getting your first Marilyn Manson album then this isn't the one for you, I would recomend Lest We Forget with the bonus DVD. Make sure with the DVD but if you have that then this or White Trash is the one for you. It is Marilyn Manson and the Spooky Kid style but has some of my favourite tracks on it. Get Your Gunn is a classic metal style song, Dope Hat is very catchy and amzing aswell as Lunchbox. My Monkey is so whacky you have to love it and it also has tracks like Cyclpos and Cake and Sodomey, if thats how you spell them. I will admit that there alot of fillers but still for any true MM fan. I only borrowed this but it has still grown on me quickly. Buy it!
続きを読む
1人のお客様がこれが役に立ったと考えています
違反を報告
レビュー を日本語に翻訳する