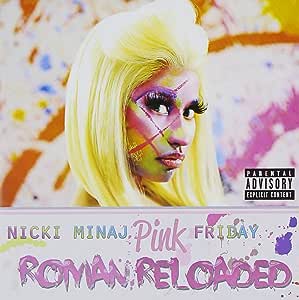 2012 sophomore album from the R&B/Pop sensation. Minaj worked on the album with a variety of producers such as Hit-Boy, Dr. Luke, Ester Dean, Rico Beats, RedOne and Oak. Includes the singles 'Starships', 'Roman In Moscow' and 'Stupid Hoe'. Nicki's debut album, Pink Friday, achieved commercial success quickly, peaking at #1 on the Billboard 200 and being certified platinum a month after its release. Nicki became the first female solo artist to have seven singles on the Billboard Hot 100 at the same time. Since the release of her debut, Nicki Minaj has become a true superstar, accumulating massive amounts of awards and accolades in the process.

Missy dizzy
5つ星のうち5.0 certain to grow on you....brilliant album
2013年2月26日に英国でレビュー済み
Amazonで購入
As with many other reviewers....my advice is do not listen and dismiss this fantastic album first time round as i almost did, instead i followed the advice given by other reviewers here and gave this album a few runs....i'd put it on as back ground music whilst getting on with whatever and i found this really did begin to grow on me to the extent that i'd rate it as one of my fave's to listen to....i won't say much more about this as music is really a very personal thing and people need to make up their own minds whether this is their thing or not....but if you've bought this album because there's one or two songs on here that you like then don't dismiss the rest of the album first time round and just skip to the songs you like....give it a chance and it's unlikely to dissapoint.
続きを読む
1人のお客様がこれが役に立ったと考えています
役に立った
フィードバックを送信中...
フィードバックをお寄せいただきありがとうございます。
申し訳ありませんが、お客様の投票の記録に失敗しました。もう一度試してください。
違反を報告
レビュー を日本語に翻訳する