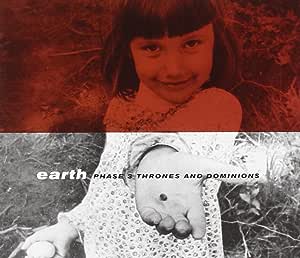 From the band that gave Sunno))) their name and concept comes their third album, re-issued on CD. Vinyl also available.

From the band that gave Sunno))) their name and concept comes their third album, re-issued on CD. Vinyl also available.

Zer-o-jimm
5つ星のうち4.0 Dronin' Throne
2011年8月24日にアメリカ合衆国でレビュー済み
Amazonで購入
"Phase 3: Thrones and Dominions" is one of those recordings that gives a newcomer a new perspective on the potential of the electric guitar. In this case, the idea is simple: do away with everything else and replace it with a dense wall of buzzing guitars. There are no vocals whatsoever on this recording, and drums are used very sparingly. The 'bottom' of the music is supplied by low drones from the guitars rather than basslines. There are no solos or obvious lead parts, just simple riffs and feedback.

Despite the minimalistic formula for the album's sound, different songs are quite distinguishable, and have individual moods. The first song, "Harvey", is centered around a tuneful indie rock riff, and is probably the most 'human' thing on the album. Track two, "Tibetan Quaaludes" then goes in a completely different direction with a menacing opening riff sequence and proceeds through a number of spacey prog movements. Later on, the song "Thrones and Dominions" drones and screeches for over ten minutes. At high volumes, the sound is overwhelming and enveloping, like being in a storm. Like all good music, however, there is beauty here.

Unfortunately, a large chunk of the album's duration is taken up by "Phase 3: Agni Detonating over the Thar Desert". "Thar Desert" is a cool rising and falling wooshing sound that sounds like it's coming out of a crackling AM radio. Sonic Youth's "Providence" has a similar sound in its mix. "Thar Desert" rises and falls constantly for 15 mniutes with very little variation. I'm guessing the aim was to be ambient, hypnotic, or even soothing, but after three minutes, it gets boring.

But that's just one track out of eight, so the succesful 4 stars remain.

C. Jackson
5つ星のうち4.0 Perhaps the best example of early-period Earth
2014年11月27日にアメリカ合衆国でレビュー済み
Amazonで購入
Earth can be a pretty divisive band, especially when discussing the early material. I really love Phase 3, from the sensory over-assault of "Agni Detonating Over The Thar Desert" to the meditative drone of Thrones and Dominions, it covers a lot of ground. I've been following Earth for many, many years, and even though I'd probably identify either Hibernaculum or The Bees Made Honey In The Lion's Skull as my "favorite" album by Earth, I find myself revisiting Phase 3 again and again even years later. The production is rough, sometimes it seems that a lot of the songs are more ideas and motifs than developed products, but as a landmark in the drone genre, I think it's a must-have.
続きを読む
1人のお客様がこれが役に立ったと考えています
役に立った
フィードバックを送信中...
フィードバックをお寄せいただきありがとうございます。
申し訳ありませんが、お客様の投票の記録に失敗しました。もう一度試してください。
違反を報告
レビュー を日本語に翻訳する

scw024000
5つ星のうち4.0 Underrated effort from Earth
2012年12月30日にアメリカ合衆国でレビュー済み
Amazonで購入
This album really deserves 3 1/2 stars, but Amazon didn't give me the option, so 4 it is...
It's not Earth 2, but it's not bad at all. Songs like "Thrones and Dominions" and "Tibetan Quaaludes" are as good as anything Earth has ever done. Some songs, however, seem almost as though they were unfinished fragments of a song that Dylan Carlson decided to throw in to fill out the album. Maybe it's just me, but the song "Phase 3: Agni Detonating Over The Thar Desert" seems like homogeneous white noise and doesn't really do much anything for me.
If you've never purchased an Earth album before, then this one really isn't a good place to start. But if you like Earth, this is one of their underrated albums and is worth purchasing for "Thrones and Dominions," alone.