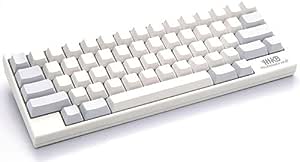 P. Douglas
5つ星のうち5.0 Brilliant keyboard
2015年10月15日に英国でレビュー済み
色: ブラックスタイル: 無刻印 通常モデル(キーボード単体)Amazonで購入
Arrived well packed and within the stated time. I had to pay customs charges but was expecting that. It made the keyboard cost over GBP200! You can get a keyboard for a tenth of that, so was it worth it? I would say yes, it was. I have never had any use for function keys, numeric keypads, etc, so I don't miss them, and in return I get a huge amount of desk space back: this thing is tiny, but not because the keys are small, simply because it doesn't have loads of surplus ones. It's great to type on. I spend a lot of time typing and it amazes me how many people are willing to do so on keyboards that are horrible to use (and probably bad for them in the long term). I like the blank keys because I touch type and use dvorak layout, so blank is arguably better than having the wrong label on the keys. The only thing that is strange at first is having to use Fn plus a letter key instead of an arrow key, though it's easy enough to get used to, and the actual pattern of the arrows is more logical than the usual inverted T. You might also miss a Caps Lock key, though again it's not something I ever used much, and I like the placing of the Control key. Overall, I would say this is the best keyboard I have ever owned: beautifully designed and beautifully made, and a nice alternative to the more usual Cherry switches if your are looking for a good quality keyboard.
続きを読む
3人のお客様がこれが役に立ったと考えています
役に立った
フィードバックを送信中...
フィードバックをお寄せいただきありがとうございます。
申し訳ありませんが、お客様の投票の記録に失敗しました。もう一度試してください。
違反を報告
レビュー を日本語に翻訳する

Justin Sarwer
5つ星のうち5.0 No regrets, HHKB #1
2015年10月8日にカナダでレビュー済み
色: ホワイトスタイル: 無刻印 通常モデル(キーボード単体)Amazonで購入
I was a little weary at first to wander from the standard keyboard layout...But I was not disappointed. I quickly got use to the layout, and the topre key switches make this keyboard a DREAM to type on.

William Bryan Gilbert
5つ星のうち5.0 High quality keyboard with well thought out key layout
2016年9月22日にアメリカ合衆国でレビュー済み
色: ホワイトスタイル: 無刻印 通常モデル(キーボード単体)Amazonで購入
This is by far the best keyboard I have ever owned. The topre switches are a pleasure to type on and the PFU key caps are extremely high quality and always feel smooth to the touch even after hours of typing.

While the layout is a bit non-standard, it is extremely efficient and takes surprisingly little time to become accustomed to for touch typists. The control key is in the perfect location, especially if your a linux / vim / emacs user. Having the escape keys and delete keys easily accessible from the home row is also an extremely nice quality of life improvement. The function layer is extremely well thought out and after a few days using the arrow key cluster or using the F1-12 keys will become very natural.

The keyboard is very light and compact, and I transport it to and from work easily in my backpack every day. I personally recommend the blank keys as the board looks very nice without print, while I was a little hesitant at first I quickly felt extremely comfortable with the blank key caps after a couple days. If you work at a computer all day and are considering buying this keyboard, do yourself a favor and just purchase it now. You will not regret it.
続きを読む

- The HHKB has a good but unusual key layout. Certain keys used frequently by devs have been moved for easier accessibility. Unfortunately, this makes it difficult for me to switch back and forth between the HHKB and a traditional QWERTY.

- I prefer keyless, 1337af, and find it easier to manage the HHKB's 60 keys than keyboards w/ more keys.

- My only complaint is w/ the arrow keys. I would prefer the arrow keys to be 'function key' + 'WASD', although this would require two hands instead of one.

Dane
5つ星のうち5.0 The hype is real
2019年1月5日にアメリカ合衆国でレビュー済み
色: ブラックスタイル: 無刻印 通常モデル(キーボード単体)Amazonで購入
What can I say, the hype is truly real. Moving from a full-sized keyboard to this bad boy, the efficiency is realized immediately. No longer do I have to move my hand across my desk to get to my mouse, a quick move and the mouse is beneath my fingertips. Being an avid hotkey and VIM (navigating computers/files without the need of a mouse) user, this keyboard feels just like best home one could ask for. The release from each key feels as if a best friend is wishing you farewell, only until another delightful keypress is initiated again, whereupon you are greeted sweetly with a snappy press before you leave yet again, and the bouncing between keys continues as if a dance.
続きを読む
1人のお客様がこれが役に立ったと考えています
役に立った
フィードバックを送信中...
フィードバックをお寄せいただきありがとうございます。
申し訳ありませんが、お客様の投票の記録に失敗しました。もう一度試してください。
違反を報告
レビュー を日本語に翻訳する

170best
5つ星のうち5.0 Averaging 140-plus WPM with this baby!
2015年6月25日にアメリカ合衆国でレビュー済み
色: ブラックスタイル: 無刻印 通常モデル(キーボード単体)Amazonで購入
I've had this board for a few months now. Fatigue and hand pain is non-existent even after long weeks of typing. The feel is perfect. I'm fastest with this board sitting on my lap. I'm a competitive typist and fly on this. Accuracy has improved tremendously. This thing is worth the price. Just get it. Real deal.