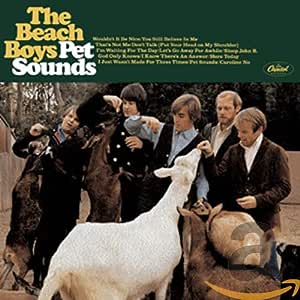 Brian Wilson's 1997 remix of Pet Sounds let's US finally hear this immortal album in stereo. Hang on to your ego for a total of 27 tracks!

Brian Wilson's 1997 remix of Pet Sounds lets us finally hear this immortal album in stereo. Hang on to your ego for a total of 27 tracks!

S. Lornie
5つ星のうち5.0 A masterpiece!
2018年6月30日に英国でレビュー済み
Amazonで購入
Pet Sounds is an album that (at least for me), I could never get into when I was younger. It was a bit too strange and out of this world for my immature brain to handle. But as I have grown older, I have started to understand the appeal of the album and why it is considered one of the finest records ever made.

Even now, after playing it quite frequently for the past few months, I can still understand why Pet Sounds may rub people the wrong way. It does not have any specific style and instead chooses to utilises many different sounds, some fairly normal for the time and others that are quite unusual. Fans of the band will be quick to point out the fan favourite tracks like the opening, Wouldn't It Be Nice, Sloop John B and of course God Only Knows. Three stand out songs and for a very good reason.

The album as a whole is an interesting muddled mess of psychedelia and '60s pop. It is very progressive in a way and strange in so many ways. It is too soft to be a rock album, it's too complex for a pop album and the concept is so elaborate that it should by all means put off people from both sides of the fence. But for whatever reason, it works beautifully. It just takes a little time to appreciate.

The copy of the album I own presents the album its original mono as well as a more recent stereo mix. The original sound is very warm, has a traditional '60s production and fits in perfectly with the rest of The Beach Boys catalogue. You could argue that it's exactly how the album should sound and should always be played that way. However, I have grown to appreciate the stereo mix just as much. Where the mono provides us with how it should sound, the stereo gives us an interesting alternative. By separating the tracks and hearing them with a lot of space between each instrument, it's fascinating. It lets you hear a lot of details that can be easily missed in the original print.

I'm not going to pretend that I understand the concept behind the album. But I can say that after many years of listening to it, I finally understand why people love this record so much. It was an extremely daring project by the standards set in the '60s and is an album that has very rarely been matched on a technical and creative scale.

Pet Sounds is worth a purchase, no questions asked. It may seem a bit strange at first, but put on a pair of headphones and listen to the details. I would happily bet that you'll always find something new with every listen.
続きを読む
11人のお客様がこれが役に立ったと考えています
違反を報告
レビュー を日本語に翻訳する

Jurg
5つ星のうち4.0 Review for the 50th anniversary deluxe edition
2016年7月30日に英国でレビュー済み
Amazonで購入
I bought the deluxe edition of “Pet Sounds 50th anniversary”, not the box set. I already have the Pet Sounds Sessions box set released in 1996 and to be honest … I listened to it a few times. Why would I give a small fortune for a release when I know I will only listen to it a few times more. I won’t discover anything new except for the two versions of “I know there’s an answer” and “Good Vibrations: master track with partial vocals”. These songs are not on my new deluxe edition although there was plenty of room for it on cd1. We blame marketing strategy!

So what do I have now?

The mono mix of the album on cd1 is different from the previously released ones because now they have found a “superb mono master from 1972, originally supervised by Carl Wilson”. Does it give me a new listening experience? Not really! The instruments stay far behind the vocals (and maybe even more so then before … or it’s been a while to remember). A good thing is that we can listen to the instrumental album on cd2 (when you buy the box set you have these instrumentals also but they are spread across cd2 and 3). Wonderful, sometimes complex, arrangements.

Cd2 ends with live recordings (all previously unreleased). The main reason I bought the album again. 4 times “God Only Knows”, 2 times “Wouldn’t It Be Nice” and “Sloop John B” and 1 time “Good Vibrations”, “Caroline No” and “You Still Believe In Me”. Couldn’t they find live recordings of other Pet Sound songs? We blame marketing strategy again! But we can compare what we have. My opinion is that the 80’s and 90’s versions are the best. Probably because the recording equipment was much better so the sound quality is warmer but also because they have some nice arrangements. Especially the “Sloop John B” Universal Studios version from 1989. Brian Wilson is clearly audible although, in that time, already working apart from The Beach Boys.

I read Capitol Records will release a 50th anniversary edition of “Good Vibrations” somewhere in the fall. Maybe thanks to marketing strategy “Good Vibrations: master track with partial vocals” will be on it!

Mal Jones
5つ星のうち5.0 then when they recorded Fun, Fun
2017年6月24日に英国でレビュー済み
Amazonで購入
I have always been a fan of the Beach Boys...saw them 3 times in 60s, then when they recorded Fun,Fun,Fun, with Status Quo in 90s and finally at Hyde Park in 2001 again with SQ.....But when my daughter gave me the Platinum Collection as a xmas present couple of years back...it whetted my appetite again....I started with Dennis Wilson POB....I can't begin to describe the how it made me feel....so raw, heartfelt and pure genius, so I moved onto Pet Sounds....it brought back so many memories of my teen years...an excellent album from another genius....I also ordered BB party! uncovered and unplugged...made me laugh and cry.....now waiting for the other albums I have ordered....Now a complete Beach Boy fan!!!!
続きを読む
7人のお客様がこれが役に立ったと考えています
違反を報告
レビュー を日本語に翻訳する

Gra 53
5つ星のうち5.0 Timeless
2018年10月9日に英国でレビュー済み
Amazonで購入
Normally I would choose mono over stereo for 60s album but this mix was supervised by Brian Wilson. Haven't done comparison but I can tell you this sounds better than any cd version available and believe me I have many cd versions. This was originally released in one of the worst covers ever and this 50th anniversary edition has done nothing to improve that. However it is 180g and at the time of review it was priced low and of course it is timeless.
続きを読む
4人のお客様がこれが役に立ったと考えています
違反を報告
レビュー を日本語に翻訳する