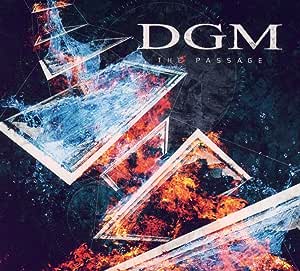 Fergal Woods
5つ星のうち5.0 DGM - OMG !!
2016年10月15日に英国でレビュー済み
形式: CDAmazonで購入
My exposure to Italian heavy rock is very limited - Lacuna Coil, Vision Divine and the Dario Mollo and Giuntini Projects (which feature Glenn Hughes and Tony Martin on vocals) and this album shoots to the top of that list replacing Vision Divine's "The 25th Hour". DGM got their name from the first initials of 3 of their original members - long departed the scene - and first appeared in the mid-90s. The music is a fusion of classic rock and speed metal with more than a touch of prog thrown for good measure.

"The Passage" contains 60 minutes of almost unrelenting hard driving heavy rock with only two slow songs "Disguise" and "In Sorrow", which are the 2 shortest tracks. These are quite impressive and in terms of overall balance and variety DGM should probably include more slower songs as they both demonstrate the strengths of the singer and pianist in particular.

The remaining 9 songs (all over 5 mins long) are no-holds-barred rockers with rapid-fire drums and just the right amount of blast beat double bass kicks. Simone Mularoni is a guitar hero in the making with dynamic rhythm accompaniment, crunching riffs and blazing guitar solos with again the optimum amount of lovely melodic passages. In other words this is metal with taste as none of the players gets carried away and the songs are well balanced between vocal and instrumental contributions.

The vocals are provided by Mark Basile who has a fine voice and excellent range. Thankfully there's no growling here and harmonies strengthen the choruses. Evergrey's Tom Englund adds guest vocals on "Ghosts of Insanity" but Basile emerges as being well up to the competition. The other guest contributor is Symphony X maestro Michael Romero but Mularoni isn't in any way overshadowed. The keyboard player plays mainly second fiddle (sorry!) to guitar but plays a couple of great solos and adds colour elsewhere with piano and a variety of synth sounds. Europe (better not mention EU at this point in time) has never had it so good in terms of rock and metal bands. Scandinavia has been producing great bands for fun and now this Italian outfit has laid out its credentials in no uncertain terms !.

"The Passage" is DGM's 8th album and it's predecessor "Momentum" is almost as good. Check out their YouTube entries. Like I've mentioned they are less prog than reviewers on American sites indicate but do branch into power metal at times and the drummer does a great job of duplicating Mike Portnoy's attack on the supercharged parts eg. "Fallen" or "Portrait". At times they remind me of Threshold but riffs are less reliant on chords as Mularoni uses lots of connecting notes or other tricks to spruce up chord sequences. "Daydreamer" is funkier and would suit Glenn Hughes down to the ground, but Basile is well up to the task here also.

There's no other way to describe this than a powerful production. I'm amazed it hasn't as yet been reviewed on these pages, and has received little airplay. There won't be a better hard-rocking CD released this year, and it stands comparison with the majority of rock releases over the last 20 years - yes, it's that good !

Well what are you waiting for ?

VH 1978
5つ星のうち5.0 DGM
2016年10月26日にドイツでレビュー済み
Amazonで購入
Relatively a new band for me as soon as I heard the first single Animal it wowed me that much that I pre ordered the CD version, probably a contender for album of the year for me as well. Then i found out that it was coming out on vinyl so I bought one straight away another Killer Frontiers release Highly Recommended
続きを読む
役に立った
フィードバックを送信中...
フィードバックをお寄せいただきありがとうございます。
申し訳ありませんが、お客様の投票の記録に失敗しました。もう一度試してください。
違反を報告
レビュー を日本語に翻訳する
その他の国際レビューを読み込む

Gregory Young
5つ星のうち5.0 Their best yet
2016年9月28日にアメリカ合衆国でレビュー済み
形式: CDAmazonで購入
Probably their most melodic album with Marc Basile on the mic. Love his voice. All the songs are strong as expected and high quality musicianship throughout. My only gripe is the short ballad. Marc sounds so good and sings with such emotion it's a crime to have a 1min or so song. Also I'm not a fan of having guest singers who aren't as good as the bands own singer. No offense to evergrey fans but would rather just have Marc sing. If I want evergrey I'd buy evergrey. For me this is still there most accessible release and look forward to more from this line-up.
続きを読む
2人のお客様がこれが役に立ったと考えています
役に立った
フィードバックを送信中...
フィードバックをお寄せいただきありがとうございます。
申し訳ありませんが、お客様の投票の記録に失敗しました。もう一度試してください。
違反を報告
レビュー を日本語に翻訳する

Bryan
5つ星のうち3.0 Italian Progressive Metal with some promise.
2017年6月26日にアメリカ合衆国でレビュー済み
形式: CDAmazonで購入
If you like progressive metal from the likes of bands such as Symphony X and Dream Theater than you might like these guys. Personally I find them to be OK, I'm still warming up to them. DGM's best asset is their lead guitarist Simone Mularoni who is a real virtuoso on the axe. If you want to add another progressive metal band to your discography and want to hear more blistering guitar work akin to Michael Romeo or John Petrucci than these guys will not disappoint.
続きを読む
1人のお客様がこれが役に立ったと考えています
役に立った
フィードバックを送信中...
フィードバックをお寄せいただきありがとうございます。
申し訳ありませんが、お客様の投票の記録に失敗しました。もう一度試してください。
違反を報告
レビュー を日本語に翻訳する

Switchblade Metalman
5つ星のうち5.0 Great Follow Up
2019年3月20日にアメリカ合衆国でレビュー済み
形式: CDAmazonで購入
Momentum will probably always be my favorite album, but Passage definitely gave it a run for its money. Musicianship is superb and the production is so crisp. These guys are awesome, definitely a top CD in my collection.
続きを読む
役に立った
フィードバックを送信中...
フィードバックをお寄せいただきありがとうございます。
申し訳ありませんが、お客様の投票の記録に失敗しました。もう一度試してください。
違反を報告
レビュー を日本語に翻訳する