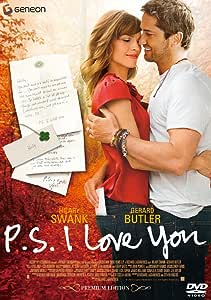 A. Roberton
5つ星のうち5.0 Lovely Story Well Told & Filmed
2020年1月6日に英国でレビュー済み
Amazonで購入
Sometimes a film comes out that surprises and remains in the depths of your mind. This is one such film.

The story is simple enough - very happy married couple, all OK, then husband dies, wife devastated. But there is a twist, husband has prepared for his death and sends (you'll see when you watch the film) his wife (extremely well acted by Hillary Swank) letters for her to go places and see things - OK enough of the story, I do not wish to spoil it any more.

Suffice to say, this is a lovely film that you will want to watch again and again.

tracy
5つ星のうち3.0 Okay-ish
2016年3月14日に英国でレビュー済み
Amazonで購入
I am a huge fan of the novel PS I love you & so i decided to watch the film. I was left feeling a little disappointed if I'm honest.
I understand that producers/directors like to put their own stamp on a project, but they can still do that whilst remaining true to the story line.
In the novel, Holly is Irish & Gerry is English. They have reversed the roles in the film.
In the novel, Holly's dad features frequently, and we learn that he is responsible for the work/maintenance of her garden. In the film, her dad is none existent, having walked out in Holly & her mother when she was a child, using this as the backdrop of her 'commitment issues with regards to children.
The song, Galway Girl, a great song & one of my favourites, however it left me a little perplexed: 'Her hair is black and her eyes are blue.'
If I was Holly, I would be questioning just who the woman is, Gerry is singing about...considering that Holly (played by Hillary Swank) has brown hair & brown eyes.
Gerrard & Hillary play the role of Gerry & Holly well & have good chemistry, though couldn't help but feeling short changed by the film. I guess this is the downside to having read the novel first, as so often is the case.
Overall, a nice film to watch on a rainy afternoon while completing chores.

Izzy
5つ星のうち5.0 I didn't think anyone could play Gerry Kennedy's role so well
2013年5月30日に英国でレビュー済み
Amazonで購入
I have always loved the book and when I heard the movie was coming out it took me a few years before I decided to watch it, as I didn't want to be disappointed. However I could not have been more wrong, because despite some differences from the movie to the book, the message was still there and all the actors where incredibly good. Touching and funny, this movie is a total roller coaster and a bit like we do in life we realize that even while going through the toughest loss you can still find a way to laugh, to live, to start again, and that those ho have loved us will always live a mark in our hearts which cannot be deleted, and yet there is more life to live.
続きを読む
役に立った
フィードバックを送信中...
フィードバックをお寄せいただきありがとうございます。
申し訳ありませんが、お客様の投票の記録に失敗しました。もう一度試してください。
違反を報告
レビュー を日本語に翻訳する

Kiki
5つ星のうち4.0 pass the tissues!
2010年6月9日に英国でレビュー済み
Amazonで購入
I DID read the book first and I loved it - and I did like the film very much, although not as much as the book. Excellent acting and moments of huge tension and sniffing in the tissues. I thought the film was convincing although I too would of course have preferred to have the film set in Ireland....
The film doesn't get 5 stars because it is not faithful to the book but the four stars are highly merited.
If you have a choice, watch the film first and read the book later or, just read the book and view it with your own imagination; I bet you'd make wonderful pictures!

Jess
5つ星のうち1.0 Read the book first then watched the DVD....
2011年5月7日に英国でレビュー済み
Amazonで購入
I was sooo dissapointed in this DVD that i regreted purchasing it. Maybe it's because the book was sooo much better. I know movies made from books can cut and change large chunks for blockbuster movies but this had big differences in my view. These included making the female character American when infact all the characters are Irish in the book, the actor who played Daniel was so awkward in the film made uncomfortable viewing. While watching it i was tempted to turn it off but thought i should see it through, was quite annoyed with the film actually.
続きを読む
1人のお客様がこれが役に立ったと考えています
役に立った
フィードバックを送信中...
フィードバックをお寄せいただきありがとうございます。
申し訳ありませんが、お客様の投票の記録に失敗しました。もう一度試してください。
違反を報告
レビュー を日本語に翻訳する

Jessie
5つ星のうち3.0 Lovely film
2012年8月6日に英国でレビュー済み
Amazonで購入
A lovely film, very touching and loving, a sweet storyline as the late husband leaves messages for the wife to discover after he has passed which helps her in her slow recovery process of greiving.

The idea behind the story is wonderful however personally for me once I've watched it once I couldn't watch it again. Personally I did not find that the actors had very good chemistry with one another...
...But I'll leave that for you to decide!

Other than that, a very good film!

rhiannonmould116
5つ星のうち5.0 Fantastic chic flick book!
2015年10月29日に英国でレビュー済み
Amazonで購入
Fantastic read i .ouldnt put it down. I do want to read some more of this authers books. It made me cry and laugh at the same time! Ive passed it on to work colleagues and friends and everyone of them loved it. I have seen the film and i have to say the book is soooooo much better.
続きを読む
役に立った
フィードバックを送信中...
フィードバックをお寄せいただきありがとうございます。
申し訳ありませんが、お客様の投票の記録に失敗しました。もう一度試してください。
違反を報告
レビュー を日本語に翻訳する
その他の国際レビューを読み込む

Shopalol
5つ星のうち5.0 Fantastic
2014年3月28日に英国でレビュー済み
Amazonで購入
I started to watch and thought oh what have I done? Then as the story starts to get going you can't take your eyes off the screen, what next? I shan't spoil it for you.... but I was riveted to the end laughing, crying, told all my friends you need to see it for yourself especially as the georgeous Gerard Butler is co-starring. Highly recommend.
続きを読む
役に立った
フィードバックを送信中...
フィードバックをお寄せいただきありがとうございます。
申し訳ありませんが、お客様の投票の記録に失敗しました。もう一度試してください。
違反を報告
レビュー を日本語に翻訳する

LChP
5つ星のうち4.0 A Success Made Of An Audacious Subject
2016年12月15日に英国でレビュー済み
Amazonで購入
Although its title, P.S. I Love You, points to a brainless rom-com of sorts, it is misleading as this film is more of a drama with comic undertones. The subject matter is treated tactfully and with real heart, knowing how no-one would want to be in her shoes.
続きを読む
役に立った
フィードバックを送信中...
フィードバックをお寄せいただきありがとうございます。
申し訳ありませんが、お客様の投票の記録に失敗しました。もう一度試してください。
違反を報告
レビュー を日本語に翻訳する

Mr Alex Hughes
5つ星のうち5.0 Has to be the best chick flick I have ever seen...
2013年3月24日に英国でレビュー済み
Amazonで購入
You know when you watch action type movies all the time & then all of sudden it's Friday night & your girlfriend has chosen the film. You then think due to the name of it o god here we go again. But surprisingly I really enjoyed this thanks to Gerard Butler been one of the funniest actors in a weird kind of way because you can relate to him due to his position in the film. You will not be disappointed due to how funny Gerard Butler is!!!
続きを読む
役に立った
フィードバックを送信中...
フィードバックをお寄せいただきありがとうございます。
申し訳ありませんが、お客様の投票の記録に失敗しました。もう一度試してください。
違反を報告
レビュー を日本語に翻訳する