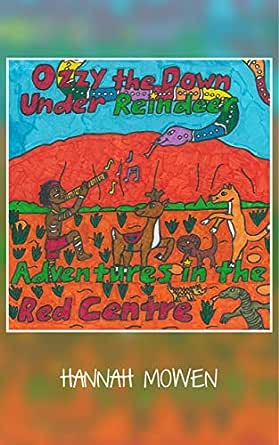 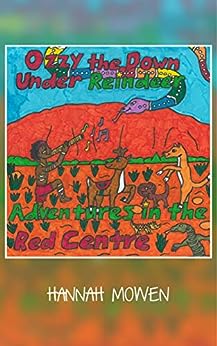 Ozzy the Down Under Reindeer: Adventures in the Red Centre (English Edition) Kindle版

HANNAH MOWEN is a remarkable young lady with an amazing memory and a wonderful and very vivid imagination. She has Asperger syndrome, which affects her social skills and coping mechanisms. Hannah loves all things Disney and her writing has a magical touch and feel to it that parallels what one experiences when visiting Disneyland. Living in Sydney with her parents Shae and Max, Hannah plays guitar, has a 2nd Dan black belt grading in Tae Kwan Do and is a creative artist who transfers her thoughts and ideas onto ceramic plates and vases, usually with an Aussie theme. Animals are a big part of Hannah's life, particularly horses, so she rides every weekend. When she was little, she had a whole collection of My Little Pony toys and when she was two, had her first donkey ride at Old Sydney Town at Gosford. As a toddler, she enjoyed watching the beautiful show horses at El Caballo Blanco Ranch. In school holidays, Hannah always loved going to Sydney's Taronga Zoo with her Dad to see the zebras, giraffes, elephants, penguins, red pandas, seals, parrots, dingoes, snow leopards, lions, tigers, crocodiles, snakes and lizards and even remembers the black jaguar that the zoo once had. When she was 14, Hannah visited Sea World in Orlando, Florida, where she fulfilled her dream of seeing the orcas (killer whales), walruses, beluga whales and manatees (dugong family). And on visits to Port Douglas, Hawaii and Fiji she snorkelled and got to see all the beautiful fish close up. Hannah has had many pets: a poodle named Murphy, four cats named Garfield, Smokey, Marty and Linley, two budgerigars named Charlie and Fred, and a Siamese fighting fish named Little Dragon. For about eight years, Hannah worked at Aristocat Boarding Cattery (named after the Disney movie The Aristocats) and learned about caring for animals and their first aid. She currently works as an Animal Attendant at Hills District Veterinary Hospital, a position she really enjoys. Hannah has also been learning a lot about birds and has taken up bird-watching. An admirer of some of the famous adventurers and zoologists on TV, such as Steve Irwin, Steve Backshall and the Kratt Brothers, it is Hannah's dream to go to Australia Zoo on the Sunshine Coast, Queensland, to see the Irwin family and watch the croc shows. Ozzy the Down Under Reindeer: Adventures in the Red Centre is Hannah's second book, and follows on from her first book, Ozzy the Down Under Reindeer: Christmas in the Bush. So that's a little of Hannah's story, and how she came to know and love so much about animals! --このテキストは、paperback版に関連付けられています。