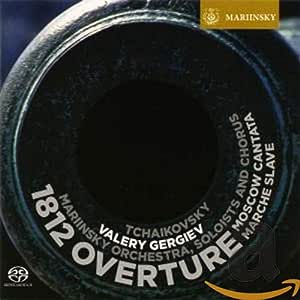 Yi-Peng
5つ星のうち3.0 A well-conceived programme of Tchaikovsky's official commissions that lacks fire in the final analysis
2014年5月17日に英国でレビュー済み
Amazonで購入
A disc of Tchaikovsky's five official commissions looks like a good idea on paper. It makes for a coherent programme that juxtaposes well-known and lesser-known works. However, when listening to this Gergiev-Maryinsky offering, I can't help thinking that things did not go well. I'm not begrudging Gergiev for anything, even for his pro-Putin stance. However, as much as he has given us some thrilling recorded performances, he seemed to be on his off-day on this occasion. As a result the better-known works lacked fire and punch. Note attacks tended to sound flaccid and lacking in a certain crispness. The recorded sound is also poor. Like some of Gergiev's Maryinsky recordings (his Decca Swan Lake, for example) the sound tends to be boomy and congested, and does not spread out and bloom to give air, space and detail to the various instruments and sections.

The disc leads off with a middling account of the 1812 overture. Though this individual piece has had dozens of recordings, it's refreshing to hear it in the context of Tchaikovsky's official commissions, most of which incorporate the Tsarist national anthem at climaxes and crucial points. Anyway, despite a nice viola-cello hymn introduction, the performance does not quite lift and bite at the first stirrings of battle. The cannon sound-effects at the climax sound rather lame, lacking in the body and realism of real cannons being fired. The good point about this rendition is that there is continuity between sections, so at least Gergiev keeps the momentum going. In the final analysis, however, this 1812 lacks the thrill, frisson and excitement of 'Dorati's Minneapolis recording on Mercury or even Neeme Järvi's DG Gothenberg rendition.

After the 1812 overture comes the Moscow Cantata, a work that's new to me and rarely, if ever, recorded. This might occasionally be second-tier Tchaikovsky, but what can you do with official commissions? Anyway this work helps to give the disc a lift. Gergiev sculpts the performance nicely, and the chorus and two soloists give a strong showing. This work and the performance may not set the world on fire but it's still good.

The shorter works come off quite good, perhaps marginally better than the 1812. There is a bit more commitment to the proceedings. The Slavonic March is pretty good and benefits from a steady momentum that builds up to the cathartic eruption of the Tsarist anthem. The Coronation March for Tsar Alexander II and the Overture on the Danish National Anthem fare better, perhaps there are so few recordings of these two pieces. There are times when I can't help thinking that these performances are well-played but there's not much else to write home about. At times I wish that the brasses had been alert and blared a bit more. They tend to be weak during the first parts of these pieces and only wake up at climaxes.

So while it's good to have these pieces in a programme like this, the results don't seem as inspired as they should. Not to strike against Gergiev and his musicianship, of course. On this recording he just seemed not at his best and the orchestra seemed underpowered. So I'm afraid this is a take it or leave it release, but I wouldn't mind having it in my Tchaikovsky collection.
続きを読む
1人のお客様がこれが役に立ったと考えています
役に立った
フィードバックを送信中...
フィードバックをお寄せいただきありがとうございます。
申し訳ありませんが、お客様の投票の記録に失敗しました。もう一度試してください。
違反を報告
レビュー を日本語に翻訳する

Mr. C. Street
5つ星のうち3.0 Nothing to set the world on fire.
2012年1月3日に英国でレビュー済み
Amazonで購入
The 1812 must be one of my favourite pieces so I am quite picky about it. I ordered this without any preconceptions, just wanted to see what it was like.

Overall the presentation is nice, if that's important to you, there is a good booklet. Musically however I'm afraid it's quite something else. The orchestral exection is flawless - the technical presentation and cannons especially are something else again.

The 1812 is "problematic" from a levels persepective - the beginning and end are very different in volume that you can easily accomodate with a live performance, but on CD or indeed vinyl it was always tricky to get them right. This CD has the beginning boosted well, and the transition to the main part of the work is handled sensitivly and it's essentially unnoticable. All well so far, and the recording itself is sparkling and very pleasing to listen to - Gergiev and the Marinsky have a well deserved reputation.

Sadly it all comes apart at the end. The churchbells are well placed and with a good setup appear almost to surround you, it is a pleasing experience. The cannons, oh dear, the cannons. Whatever happened here? I don't know how or why, but they lack bass, they lack punch and as they fire the whole orchestra appears to go flat and baggy through the cannon shots. They do surround you yes and appear very well done in that regard. However I don't know what the mixing desk was doing but the result is woeful I'm afraid. All the more annoying for spoiling what was an excellent and well rendered recording. You may think it's a bit picky to concentrate on the cannons, but there are many far better recrdings out there, and the cannons *are* the 1812 to a great extent.

As for the remaining works on the CD, these are excellent. The Marinsky does a superb job it seems and I thoroughly enjoyed these. However as I do not have any other recordings of these to compare them to, I will resist the temptation of commenting on them further as it would be unfair to say more. All I will say is I enjoyed these minor works immensely.
続きを読む
5人のお客様がこれが役に立ったと考えています
役に立った
フィードバックを送信中...
フィードバックをお寄せいただきありがとうございます。
申し訳ありませんが、お客様の投票の記録に失敗しました。もう一度試してください。
違反を報告
レビュー を日本語に翻訳する

Von Strobel
5つ星のうち5.0 Great 1812 Overture
2018年3月18日にアメリカ合衆国でレビュー済み
Amazonで購入
I bought this disc solely for the 1812 overture. Gerviev and the Mariinsky play one of the best. There is tension, virtuosity
and exultation. The drums boom like fireworks. The recording is excellent.
An obscure Danish anthem is another highlight.
続きを読む
役に立った
フィードバックを送信中...
フィードバックをお寄せいただきありがとうございます。
申し訳ありませんが、お客様の投票の記録に失敗しました。もう一度試してください。
違反を報告
レビュー を日本語に翻訳する
その他の国際レビューを読み込む

Ocean Aletheia
5つ星のうち1.0 Very poor performance
2010年1月9日にアメリカ合衆国でレビュー済み
Amazonで購入
One of worst performances of 1812. However Moscow cantata may justify the purchase of this SACD. This SACD will not work on every SACD player. It does not work correctly on my Denon 5900 universal player.
続きを読む
4人のお客様がこれが役に立ったと考えています
役に立った
フィードバックを送信中...
フィードバックをお寄せいただきありがとうございます。
申し訳ありませんが、お客様の投票の記録に失敗しました。もう一度試してください。
違反を報告
レビュー を日本語に翻訳する