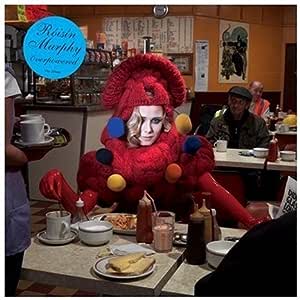 2007 sophomore album from R¢is¡n Murphy, former lead vocalist for Moloko. A heady mix of electronic dance anthems, soul-stirring Pop songs, deep, dark Funk and quirky lyrical genius, Overpowered is a thrilling and contemporary marriage of edgy Pop and irresistible Disco. R¢is¡n co-wrote and co-produced the entire album, bringing her own vision and focus to these songs whilst working with a variety of producers, writers and mixers to create what is without doubt her finest record; unpredictable, creative, inventive, exciting and hugely accessible. Working with the likes of Seiji, Andy Cato (Groove Armada), Jimmy Douglass, Ill Factor, and Parrot & Dean of All Seeing I / I Monster, R¢is¡n has brought her love of the dance floor right to the very heart of the album. This is one of the albums of the year - a breathtaking modern classic. Features the singles 'Let Me Know' and 'Overpowered'. EMI.

Johnny Myo
5つ星のうち5.0 From the primordial soup...
2007年10月30日に英国でレビュー済み
Amazonで購入
Actually, comparing Overpowered to Roisin's solo début, Ruby Blue, is a bit like comparing Moloko's polished, masterful Statues to the quirkier, more hit-and-miss Things To Make And Do - they are different projects and will appeal to different listeners in different ways.
I don't think this is her two fingers to those who ignored Ruby Blue (how many copies of Statues were sold, after all), but just the direction she wanted to go in, this time. Interesting that in interviews Roisin describes how Overpowered was "made in a pop way", rather than a "pop album," because they are mostly not pop songs, lyrically anyway. When they are, as on Let Me Know, they score the kind of direct hit they might have done had Curtis Mantronik worked with Moloko.
In fact, at time of writing, it's hard to fathom why this album isn't burning up the charts yet, considering the strength of the two singles that have already come off it. Other, lyrically diverting songs such as Primitive and Dear Miami really benefit from the slick "pop" treatment, but the one to really propel Overpowered into people's brains could be You Know Me Better, especially with some good mixes - although it's pretty much club-ready as it is. If only the clubs could still "break" an artist through. Oh well.
It's just a shame the two tracks reminiscent of Goldfrapp - Movie Star and Cry Baby - don't pursue a less marketable, and over-marketed, sound. But these are small quibbles - it still stuffs the efforts of her more self-conscious peers. Five stars!
続きを読む
10人のお客様がこれが役に立ったと考えています
役に立った
フィードバックを送信中...
フィードバックをお寄せいただきありがとうございます。
申し訳ありませんが、お客様の投票の記録に失敗しました。もう一度試してください。
違反を報告
レビュー を日本語に翻訳する

Feeling sad? Put the disc in your cd-player and see how your mood is going to change in seconds...

Its very difficult to find albums nowdays full of gems ..

Her voice is great, you can feel it...