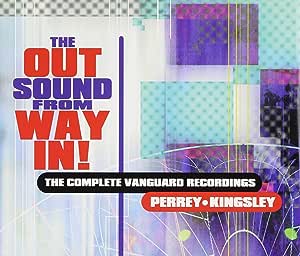 Out Sound From Way in インポート

With their outer space themes and early use of moogs and various synthesizers, Perrey & Kingsley and Jean Jacques Perry on his own pioneered the style now known as electronica-in fact, none other than Fatboy Slim contributes two remixes to this collection! You won't believe this stuff was recorded in the late '60s and early '70s, originally released on the four albums The In Sound from Way Out, Spotlight on the Moog (Kaleidoscopic Variations), The Amazing New Electronic Pop Sound of Jean Jacques Perry and Moog Indigo .

Mr D.
5つ星のうち4.0 50 years old and still sounds good
2019年6月17日に英国でレビュー済み
Amazonで購入
First hear this back in the sixties,,,,yes that long ago!!odays
So reminds me of childhood
Still sounds fresh and fun today
Wonderful what could be done prior to the computer
And the forefather of a lot of todays techno music

Mr. John R. Dwyer
5つ星のうち5.0 The original and still the best.
2010年3月23日に英国でレビュー済み
Amazonで購入
Although a lot of water has passed under the bridge, I can still remember the first time I heard the Moog synthesiser. It was the "Switched-on Bach" album on vinyl. I then heard the Perrey and Kingsley recordings and the "Moog Plays the Beatles" album. The sound was so new and exciting I bought these albums and still have them. The inevitable happened and the synthesiser found its way into pop music, and in the hands of pop musicians became far less exciting and more hum-drum and ordinary and in some cases downright dull. It is therefore great to see these original recordings released on CD so that those who are unable to play vinyl recordings can experience these truly great performances. I now wait with keen anticipation for the "Moog Plays the Beatles" recording to be released on CD.
続きを読む
2人のお客様がこれが役に立ったと考えています
役に立った
フィードバックを送信中...
フィードバックをお寄せいただきありがとうございます。
申し訳ありませんが、お客様の投票の記録に失敗しました。もう一度試してください。
違反を報告
レビュー を日本語に翻訳する

Mr. P. G. Hopkins
5つ星のうち5.0 Stop reading this and buy it already!!
2020年1月1日に英国でレビュー済み
Amazonで購入
4 albums from the late 60’s spread over 2 CDs, with an extra disc of remixes. The first 2 discs are essential listening, genuinely uplifting and joyous tracks. They made me chuckle the first time but the second and third time I was in awe at just how inventive and brilliant they are. YOU NEED THIS IN YOUR LIFE. BUY IMMEDIATELY.
続きを読む
役に立った
フィードバックを送信中...
フィードバックをお寄せいただきありがとうございます。
申し訳ありませんが、お客様の投票の記録に失敗しました。もう一度試してください。
違反を報告
レビュー を日本語に翻訳する

Pc
5つ星のうち3.0 This is good electronic music
2016年4月30日に英国でレビュー済み
Amazonで購入
This is good electronic music ,for me discs 2 and 3 are better especially the remixes on disc 3.To listen to the tracks before buying I always go to the Amazon mp3 store to sample the tracks.this is a good tip if you are not quite sure to if wish buy the album.
続きを読む
役に立った
フィードバックを送信中...
フィードバックをお寄せいただきありがとうございます。
申し訳ありませんが、お客様の投票の記録に失敗しました。もう一度試してください。
違反を報告
レビュー を日本語に翻訳する
その他の国際レビューを読み込む

fil888m
5つ星のうち5.0 More than I hoped for
2011年4月12日に英国でレビュー済み
Amazonで購入
I actually have two of the original vinyl albums so I knew what i was buying. The CD has both those albums and more so its excellent value. This is a great look into the early production of electronic music which is fun and imaginative.
続きを読む
1人のお客様がこれが役に立ったと考えています
役に立った
フィードバックを送信中...
フィードバックをお寄せいただきありがとうございます。
申し訳ありませんが、お客様の投票の記録に失敗しました。もう一度試してください。
違反を報告
レビュー を日本語に翻訳する

Robert
5つ星のうち5.0 Fun early synth album(s)
2011年9月15日に英国でレビュー済み
Amazonで購入
I owned three of these four albums on vinyl (The In Sound From Way Out!, 1966; Kaleidoscopic Vibrations, 1967; and Moog Indigo -- horrible pun (especially as it doesn't work -- "Moog" rhymes with "vogue"), great album -- 1970), hence my purchase of this compilation (as an MP3 download). They're cheesier than disco -- indeed, they're cheesier than a 500g bag of Cheese Puffs -- but that's part of what makes them such fun to listen to, in these days when we've all heard the much more sophisticated synth sounds of such as Jean-Michel Jarre, Wendy Carlos, Keith Emerson et al.

Such a pity that I can't determine what the first of the Jean-Jacques Perrey albums is, nor what year (I've guessed 1969) and that there are several errors in the ID3 tags, such as incorrectly tagging all tracks as "2006" (in fact, the first CD's tracks were 1966 and 1967, the second 1968/69 and 1970, the third 2001) and as by "Perrey and Kingsley" (the second lot were Perrey only, the third Fatboy Slim and Eurotrash) and the composer as "unknown" (most of the tracks on CD 1 were written by Perrey and Kingsley and on CD 2 by Perrey, except of course ones such as "Moon River"). I've corrected all of them in my downloaded copy, and also renamed the files to my preferred scheme of "<disc #><track #> - <title>.mp3" so that they sort correctly.

ResurrectionWaiting
5つ星のうち4.0 The in sound from way out x 5
2019年9月24日にアメリカ合衆国でレビュー済み
Amazonで購入
This even has the original song Disney used for the old Main Street Electric Parade (here as the song "Baroque Hoedown"). Kingsley would later make the early 1970's hit "Popcorn" which in Not in this collection, but if you know those songs, you have a pretty good idea of what these disks sound like. On the whole, these albums are a very early, and raw, example of turning electronic sounds into music. Through the four albums, represented in the first two cd's, you can perceive the growth of their experiments in electronic music. The 3rd cd has entertaining modern remixes.
続きを読む
役に立った
フィードバックを送信中...
フィードバックをお寄せいただきありがとうございます。
申し訳ありませんが、お客様の投票の記録に失敗しました。もう一度試してください。
違反を報告
レビュー を日本語に翻訳する

Jay L. Rudko
5つ星のうち5.0 Not for everyone, but probably for you
2011年11月6日にアメリカ合衆国でレビュー済み
Amazonで購入
My first exposure to the music of Perrey & Kingsley was when a friend turned me on to "The In Sound From Way Out" back in 1966.
I was blown away by what could be done with tape, synthesizers (then a very new concept), and this interesting little instrument called the Jenny Ondioline. It was this same instrument, by the way, that carried the melody in Kai Winding's version of "More", back in 1963. The early synthesizers could only produce one note at a time, and were incapable of producing the multi-layered sounds that today's instruments can. So you can imagine how painstaking the task of recording, assembling, and splicing everything together to produce these songs.

This set puts, in one place, all of the recordings Jean-Jacques Perrey and Gershon Kingsley did for Vanguard Records. The first two albums, "In Sound" and "Spotlight On The Moog: Kaleidoscopic Vibrations", appear in their entirety on disc 1 of this three disc set. Both sound totally amazing here, the best I've ever heard them. I had a copy of "The Essential Perrey & Kingsley", but this blows that one away sonically. Also, the last track on "Kaleidoscopic Vibrations" was switched with something that had been previously unreleased. On this set, it's fully intact. All tracks, with two exceptions, are essentially novelty tunes. All the "beeps, pwaa-pwaas", and similar electronic effects, along with movement of sounds speaker to speaker, are there. The two exceptions take a more serious approach without all the fancy effects. Those tracks, "In Sound"'s "Visa To The Stars", and "Kaleidoscopic"'s "Pioneers Of The Stars" (the track that was replaced on "Essential"), are fitting end tracks for these albums. "Visa" is very reminiscent of the Kai Winding track mentioned above.

The second disc puts two solo albums by Perrey together for the first time. These albums, "The Amazing New Electronic Pop Sound of Jean-Jacques Perrey", and "Moog Indigo", follow in the tradition of the two albums collaborated with Kingsley. I'm not getting into track-by-track descriptions here, because you gotta hear 'em for yourself. The only one I'll mention is the final track from "Moog Indigo", which is called "Passport To The Future". This track, incidentally, was covered by The Ventures as "Skylab". This track is another fitting finale to the album, again more straightforward than the other tracks preceding it. In my earlier days, (Jeez, I'm making myself sound old), I used to send tapes to friends with music and narration on them, and the track I generally ended the tapes with was "Passport". It just worked!

The third disc in this set, which I must admit I haven't listened to, features remixes of several tracks by such "artists" as Fat Boy Slim and Eurotrash.

In summary, this is a set that you should listen to if you have a sense of humor and really want to hear what your stereo can do. Electronic music can really task a system's grasp on reality, since no one knows exactly what these sounds should sound like. But it's a fun listen, and I recommend it highly.

steve_of_the_jungle
5つ星のうち4.0 A good collection. You're not going to get popcorn, tough...
2008年8月14日にアメリカ合衆国でレビュー済み
Amazonで購入
I bought this collection, it's quite exhaustive and a good item for those who want to go back to this period from time to time. I do agree with the mention that it's gonna be tough to listen to it straight through. It's not that it's slow, I can listen to Music for Airports all day, it's that some of the structures become grating after a while.

Still, I recommend it, especially at this price.

One big disappointment is you're not going to get "Popcorn", by Kingsley. It was quite a hit in itself (although most are more used to the Hot Butter version), and it being missing here is disappointing. I guess it wasn't a Vanguard recording, as it isn't on any of the collections I can see.