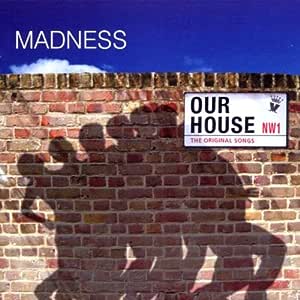 8. Driving In My Car

Yoram Laviv
5つ星のうち4.0 I would give it 5 stars if only it had more of new songs
2002年12月11日 - (Amazon.com)
形式: CD
Yes, it Madness again, and we love seeing them united again and avidly working and extending their artistic impression. A fine album, great hits; however, we've heard (almost) all of them before...and many times too in various compilations. Like Abba, Madness does not only repeat milking the same tired yet healthy cow but also has it dancing and acting on stage. Don't get me wrog, I'm there number one fun for I still own their MIS fun club card, posters, badges, shirts and Nutty Comics. I also have all of their CDs/vinyl albums and singles (including the rare floppy ones), not to mention their videos and feature film "Take It or Leave It". Nevertheless, I do not let another CD --no matter what's its title or occasion - to overcloud my simple judgment. Madness are BIG as any other BIG band from the late 70s and 80s (90s as well) such as Police, Spandau Ballet, Culture Club among others; yet, there is no excuse to sell the same thing over and over and over again, unless it is the money that speaks and the money only. Pity, for Madness' band members seemed to be the voice of the middle class aging, unemployed, bored youngsters around England of the 80s--that is why their bold attempt at the movies with "Take It or Leave It" was, if not successful, at least sincere and beautiful. Yes, I'm there biggest fun and, thus, I went and bought "Our House" as well. Give me more like "Mad Not Mad", "Keep Moving", "The Rise and Fall" and I'll seal it with a smile.
続きを読む
4人のお客様がこれが役に立ったと考えています
レビュー を日本語に翻訳する
Amazon.comのカスタマーレビューを見る(1) 5つ星のうち4.0
Amazonプライム会員ならお急ぎ便、日時指定便が使い放題
さらに、映画もTV番組も見放題。200万曲が聴き放題 。クラウドに好きなだけ写真も保存可能。
> プライムを無料で試す