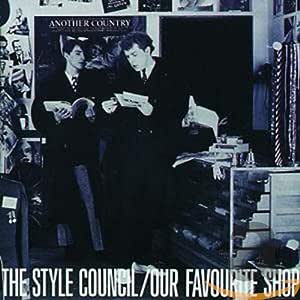 Digitally remastered reissue of 1985 album featuring Paul Weller. 15 tracks including 'Walls Come Tumbling Down', 'Cometo Milton Keynes' and 'Boy Who Cried Wolf'. When first released in the States this album was known as 'Internationalists'. Universal.

Digitally remastered reissue of 1985 album featuring Paul Weller. 15 tracks including 'Walls Come Tumbling Down', 'Cometo Milton Keynes' and 'Boy Who Cried Wolf'. When first released in the States this album was known as 'Internationalists'. Universal.

This album was The Style Council’s high point. A collection of mainly highly politicised songs that see the jazzy piano instrumentals and smoky club torch songs of “Cafe Bleu” jettisoned in favour of a more full band, rocky sound, slightly more akin to how The Jam may have progressed had they stayed together, certainly in the case of the rousing “Walls Come Tumbling Down” and the non-album single “Shout To The Top”.
Kicking off with the pertinent “Homebreakers”, the tone is set - 1985’s Britain under Thatcherism is a miserable place to be. They were not wrong. “All Gone Away”, despite its tuneful lilting acoustic backing, and “Come To Milton Keynes” continue in the same vein, then “Internationalists” raises the tempo, musically, with some poppy funk, although the cynical, world-weary message as the same. “A Stone’s Throw Away” is another cautionary, sad tale about Police and government brutality. Weller’s voice is so soulful but pointed on all this material.

“The Stand Up Comic’s Instructions”is a monologue delivered by Lenny Henry, as a bigoted Northern working mens’ club “concert secretary”. The depressing thing is, in 1985, dinosaurs like this still roamed the earth.

“A Man Of Great Promise” (to deceased poet Adrian Henri), the “Boy Who Cried Wolf” and “Down In The Seine” are all a bit of a throwback to the previous album. “The Lodgers” is another Style Council anti-Thatcher classic as is “With Everything To Lose” (later re-worked as “Have You Ever Had It Blue”).

The unique appeal of this album is that it message is so strong, so powerful, such a protest yet the music is uniformly so tuneful, often so light, so melodious. Weller has never sung better, either. Nobody else ever made political protest so musically enjoyable.

Although the rain macs and Gitanes had gone now, Weller and Talbot were now dressed in pure white denims for promotional photos. A terrible time, politically, but an even worse time for fashion.
続きを読む
3人のお客様がこれが役に立ったと考えています
役に立った
フィードバックを送信中...
フィードバックをお寄せいただきありがとうございます。
申し訳ありませんが、お客様の投票の記録に失敗しました。もう一度試してください。
違反を報告
レビュー を日本語に翻訳する

ROGERIO LAVANDIER
5つ星のうち2.0 the 2 music primers on the b side only have noises and many clicks
2018年6月29日に英国でレビュー済み
Amazonで購入
strange that I received this vinyl with noises and clicks on the first songs on side 2, I bought several albums of this same band here in amazon and I had no problems, but this turned wall painting, only graces, the customer who bought was frustrated and I you have to return the money to buy it, this universal recorder works so that all of its discs are low quality, here in Brazil it has always been frowned on since the time of phillips, because it put defective vinyl records on the market, as we have store ha over 40 years we received a lot of return that she did not accept back
which turned tables for sale
続きを読む
役に立った
フィードバックを送信中...
フィードバックをお寄せいただきありがとうございます。
申し訳ありませんが、お客様の投票の記録に失敗しました。もう一度試してください。
違反を報告
レビュー を日本語に翻訳する

June Wilson
5つ星のうち5.0 Fab Album -
2011年6月22日に英国でレビュー済み
形式: CDAmazonで購入
I had the tape version of this long ago until I wore it out! Such great lyrics and subjects tackled - my idea of how music can inspire you to think and not just listen. Love the track 'Boy Who Cried Wolf'- if you like to dance this really makes you want to especially the instrumental bit, just don't play it when you are driving!! And how relevant are some of the words in this album to the situation in this country today. Weller has always been a great artist - this is one of his best in my opinion - but then again he has done so much good stuff, how can one choose!
続きを読む
1人のお客様がこれが役に立ったと考えています
役に立った
フィードバックを送信中...
フィードバックをお寄せいただきありがとうございます。
申し訳ありませんが、お客様の投票の記録に失敗しました。もう一度試してください。
違反を報告
レビュー を日本語に翻訳する

Mr. Jason King
5つ星のうち4.0 My favourite shop too
2017年8月6日に英国でレビュー済み
形式: CDAmazonで購入
A bit unfashionable, some overly earnest clunky lyrics, a bit too reliant on keyboards, but there were some fantastic tunes on this album, and there was a point to it. We need songs like Internationalists now more than ever.
続きを読む
役に立った
フィードバックを送信中...
フィードバックをお寄せいただきありがとうございます。
申し訳ありませんが、お客様の投票の記録に失敗しました。もう一度試してください。
違反を報告
レビュー を日本語に翻訳する

Jason Parkes
5つ星のうち5.0 Paul Weller's finest hour...
2005年6月10日に英国でレビュー済み
形式: CDAmazonで購入
I'm not sure why The Style Council and 'Our Favourite Shop' have such average reception by people- The Style Council advanced on the late-Jam-singles which nodded towards soul (The Bitterest Pill, Beat Surrender, Precious, Absolute Beginners, A Solid Bond in Your Heart- the latter found on 'Extras') Over several releases, The Style Council built an excellent pop-soul sound with political content and 'Our Favourite Shop' was their peak. Afterwards the records would become distinctly hit and miss, though probably not as dull as Weller's later solo-career which is largely a tribute act to Traffic...
'Our Favourite Shop' continues the homoerotic-allusions made in that 'Brideshead'-nodding video to 'Long Hot Summer' (Weller & Talbot in front of a poster to 'Another Country') and uses then fashionable jazz (Sade, Working Week) alongside pop and soul. There are some great Weller-moments here - 'Come to Milton Keynes' remains one of the great protest-songs of the 1980s and deserves to be ranked alongside Robert Wyatt & 'Stone's Throw Away' is a bleak, strings-drenched example of dissent...
There are hit-singles here - 'Walls Come Tumbling Down' is up there with anthems by The Jam, 'The Lodgers (or she was only a grocer's daughter)' slightly dated synthpop ('Boy Who Cried Wolf' suffers similarly)& this version includes the fine 'Shout to the Top' as a bonus-track. People will also note that 'With Everything To Lose' was re-recorded as 'Have You Ever Had It Blue?' for the flop film 'Absolute Beginners' in 1986...
I'm surprised how well 'Our Favourite Shop' stands up, the irritating Lenny Henry-fronted track apart, and wonder why it isn't as feted as Weller's work before and after. 'Our Favourite Shop' a definite highlight of the British 1980s, and an album to rank alongside 'Rip It Up' (Orange Juice),'Searching for the Young Soul Rebels' (Dexys),'More Specials' (The Specials),'Waiting' (Fun Boy Three) & 'Rattlesnakes' (Lloyd Cole & the Commotions). & a bargain at this price...
続きを読む
17人のお客様がこれが役に立ったと考えています
役に立った
フィードバックを送信中...
フィードバックをお寄せいただきありがとうございます。
申し訳ありませんが、お客様の投票の記録に失敗しました。もう一度試してください。
違反を報告
レビュー を日本語に翻訳する