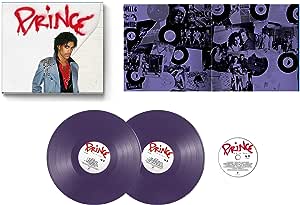 Everton Purple Warrior
5つ星のうち5.0 Not just for diehards..Purple Yoda brilliance
2019年7月20日に英国でレビュー済み
Amazonで購入
Where to start with this set? A double gatefold sleeve complete with two purple albums and and the all encompassing CD and a 20 or page booklet with essays by several of the people he collaborated with on these tracks. Overall an aesthetically pleasing package.
The content: fifteen well produced songs in their original versions before the Purple Yoda 'gave' them away. For a diehard fan they're all at least great to hear, even if a little discomforting. A great example is Manic Monday. How does Prince top The Bangles version which is undoubtedly a classic? Well he doesn't because it's like he's covered the track, even though he wrote and recorded it first!! But that's the point you see, you have to listen to the bigger tracks like they're new songs, which is difficult in itself. Greater joy may come from the album tracks he gave to others such as Holly Rock or Dear Michelangelo because they are less ingrained in their more well known cuts.
Don't get me wrong, this is the usual Purple brilliance but in an unsettling way. Buy, love. accept...I will and have.
Originals the first ten volumes...food for thought.

Amazon Customer
5つ星のうち5.0 Best album presentation. Brilliant music. Must have.
2019年7月20日に英国でレビュー済み
Amazonで購入
Arrived today on release day. Brilliant service
If you have a turntable and play vinyl this special album is a must. Presentation package is absolutely superb.
Haven’t listened to all the tracks all the way through yet but just reminds us of what a great star this man was.
So far Track 7. You’re my love. Is my fav
The packaging of this album is beyond superb
2 LPs. CD and a brilliant book.
If you are a fan. Do not miss
Even if you haven’t got a record player get it for the pure excellence and play the cd. Enjoy.

cb
5つ星のうち5.0 amazing addition.
2019年8月23日に英国でレビュー済み
Amazonで購入
A fantastic addition to the vast number of Prince albums out there. This album features 15 songs that Prince wrote but gave to other people to help further their career (and Prince was too busy with Parade, Purple Rain, 1999, Lovesexy and Sign O The Times albums...and Purple Rain the movie). This album shows Prince's vast rang. Makeup, love..thy will be done, 100mph are particular highlights. Purple vinyl too.
続きを読む
役に立った
フィードバックを送信中...
フィードバックをお寄せいただきありがとうございます。
申し訳ありませんが、お客様の投票の記録に失敗しました。もう一度試してください。
違反を報告
レビュー を日本語に翻訳する

JC
5つ星のうち5.0 Prince Heaven
2019年7月21日に英国でレビュー済み
Amazonで購入
This is an amazing package and is what all Prince fans will have been hoping for. It is well designed and the songs are amazing. The best to come out of the vault so far. I really enjoyed listening to this right from the start and it’s growing on me further day-by-day. A must have album if you like Prince!
続きを読む
2人のお客様がこれが役に立ったと考えています
役に立った
フィードバックを送信中...
フィードバックをお寄せいただきありがとうございます。
申し訳ありませんが、お客様の投票の記録に失敗しました。もう一度試してください。
違反を報告
レビュー を日本語に翻訳する