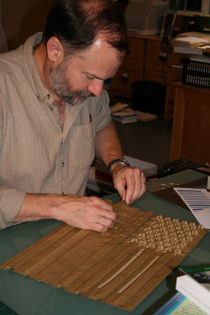 I will readily admit I became engaged with, even engrossed in, this seminal volume on the multifaceted aspects of the art, history, science, and engineering of origami in almost four dozen short papers astutely organized, really threaded through, four main sections. … There is plenty of mathematics learning and teaching engagingly embedded within the covers. … There’s something for virtually everyone, students and teachers alike, those mathematically or artistically inclined or interested, and those not so much. … novices and the origami-ignorant like me can find starting points to commence their own personalized explorations of this fascinating field. So, pick up this volume and begin unfolding it to reveal all its intricacies. May you find your own treasure ship or sacred crane among its pages!
―John E. Hammett III, Professor of Mathematics, Saint Peter’s University, and President, New Jersey Association of Mathematics Teacher Educators

When I first visited Japan in 1983 I was curious to learn how origami was taught and developed in Japan. … My search for a connection of origami with mathematics was not successful at that time. I wished that I could have seen a book or even some articles as they are published now in this book … Until recently, the scientific view of origami was rather underdeveloped and [these] proceedings might change this.
―Wolfgang Polasek, International Statistical Review, 2012

Origami 5 continues in the excellent tradition of its four previous incarnations, documenting work presented at an extraordinary series of international meetings that explored the connections between origami, mathematics, science, technology, education, and other academic fields. … Within this one volume, you will find a broad selection of historical information, artists’ descriptions of their processes, various perspectives and approaches to the use of origami in education, mathematical tools for origami design, applications of folding in engineering and technology, as well as original and cutting-edge research on the underpinnings of origami.
―L’Enseignement Mathematique (2) 57, 2011

… fascinating … With Origami 5 you can make everything from an origami angel to a full-sized baseball cap and learn all the associated mathematics along the way.
―Kay Gilliland, NCSM Newsletter, Winter 2011

Praise for the Previous Volume:
Wow! Fantastic book! It will create new folds in your brain whether you are an artist, scientist, inventor, educator, or simply like to be amazed. The balance between mathematical theory and manipulative practice, and between artistic and educational applications makes this a book for everyone. I look forward to using this book personally and professionally.
―Robert Root-Bernstein, Ph.D., co-author of Sparks of Genius: The Thirteen Thinking Tools of the World's Most Creative People

Patsy Wang-Iverson is Vice President for Special Projects at the Gabriella and Paul Rosenbaum Foundation. Introduced to origami as a child by her mother, her personal interest in origami merged in recent years with her work in helping to improve students' interest in and success with mathematics. She co-organized, with Eileen Tan and Benjamin Tan, the 2010 Fifth International Meeting on Origami in Science, Mathematics and Education (5OSME) plus a Folding Convention (PLUS!) at the Singapore Management University in Singapore.

Robert J. Lang has been an avid student of origami for some forty years and is now recognized as one of the world’s leading masters of the art. He is one of the pioneers of the cross-disciplinary marriage of origami with mathematics and organized the 2006 Fourth International Meeting on Origami in Science, Mathematics, and Education at Caltech. He has consulted on applications of origami to medical devices, air-bag design, and space telescopes, is the author or co-author of twelve books and numerous articles on origami and lectures widely on the connections between origami, mathematics, science, and technology.

Mark Yim is a professor of mechanical engineering at the University of Pennsylvania. Previously, he was a Principal Scientist at the Palo Alto Research Center (formerly Xerox PARC). His group studies modular self-reconfigurable robots and has demonstrated robots that can transform into different shapes, jump, ride tricycles, climb stairs, poles and fences, manipulate objects and reassemble themselves. Collaborative work with researchers at Harvard, MIT and Berkeley include robotic self-folding origami. He has authored over 100 journal and conference papers and over 40 patents on topics ranging from robotics and videogame feedback devices to education and robotic performance art.

Cory C.
5つ星のうち4.0 Great collection of papers about origami
2017年6月28日にカナダでレビュー済み
Amazonで購入
This is a fantastic book if you're interested in the mathematics behind origami, or a deeper understanding into why it works the way it does. This is not a collection of diagrams, nor it is for the casual folder. This is more of a series of math papers with Origami as a unifying topic. That being said, if that's what you're looking for, this is the best publication of that kind.
続きを読む
違反を報告
レビュー を日本語に翻訳する

nj4tunecookie
5つ星のうち5.0 Wonderful!
2011年9月2日にアメリカ合衆国でレビュー済み
Amazonで購入
A must for anyone that loves or collects origami books/designs. I bought it a few weeks before it was even published and I got it the week after it was, which was great. Amazon sent me a few emails asking if I got the product yet because they didn't have a shipping code yet and it wasn't even published yet. This made me feel great about buying from amazon. The book came in good condition and on time.
続きを読む
違反を報告
レビュー を日本語に翻訳する

FABIO A BECHELLI
5つ星のうち5.0 Wonderfull and powerfull integrations of human's knowledge!
2013年5月13日にアメリカ合衆国でレビュー済み
Amazonで購入
integrative and some times with transdisciplinar approch!
I very like the mix of kinds of SAPIENTIAE...
I want to go to the next OSME in Tokio - JP!

Pablo De Souza Sánchez
5つ星のうち2.0 Bad quality of the edition.
2013年1月31日にアメリカ合衆国でレビュー済み
Amazonで購入
Although the content of the articles included in this book is excellent. I am very disappointed with the quality of the paper, the print, the typography and the covers. With this price it should be better published.
続きを読む
違反を報告
レビュー を日本語に翻訳する
すべてのレビューを参照します
Amazonプライム会員ならお急ぎ便、日時指定便が使い放題
さらに、映画もTV番組も見放題。200万曲が聴き放題 。クラウドに好きなだけ写真も保存可能。
> プライムを無料で試す