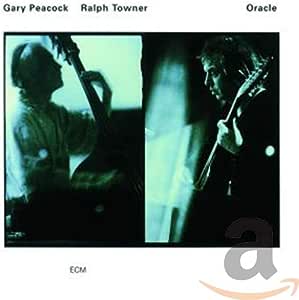 Given the obvious classical influence on bassist Gary Peacock's opener, "Gaya," guitarist Ralph Towner's exotic and exclusive use of nylon and 12-string acoustic guitars, and the 20th-century modernity of the melodies and harmonies all over Oracle, it's easy to miss the serious swing going on here. Of the utmost relevance for Oracle is Towner's work with his group Oregon--inadvertently instrumental in the rise of New Age and World Beat music, though the band operates in a much more rarified artistic atmosphere than most of the music in either of those genres. As a guitarist, Towner tends to slip under the radar that made his contemporaries--John Scofield, John Abercrombie, Bill Frisell, and Pat Metheny--icons of their instrument. But one listen to "Tramonto," a waltz in the style of Peacock's former employer, Bill Evans, easily establishes the equality of his jazz credentials. The interplay throughout Oracle helps define another genre that Towner (with ECM) and Peacock helped create: "chamber jazz." --Michael Ross

TraneSpirit332
5つ星のうち4.0 Mostly a resigned piece of innovation
2014年4月8日に英国でレビュー済み
Amazonで購入
The problem with this record seems twofold: firstly, the six Peacock compositions are possibly not complex enough harmonically to attract neither the seriously classical nor jazz-inclined audience. Towner helps the situation a lot by bringing his own invention [=chordal sense] into them. Secondly, Peacock's playing as well is a bit too simple [=harmonically unconscious], which it is even more today, e.g. in the 2013 record with Marilyn Crispell. The question is not as much in the lacking of technical capacity - except in the absence of fast "runs" - or problems with the general aesthetics, but in the overall resigned feeling. You could like that, though!

There is variety of technical style - from riff-oriented [in one piece] to walking bass [in another] - as well as variation of mood between the pieces, but thankfully a general feeling of unity, too. One Towner composition ['Hat and Cane'] combines beautifully classical and jazz, the solos in that song played mostly in the jazz vein. In this piece Peacock suddenly comes to life, playing more like would've been wished for the whole record. The other Towner track, a classically inclined treat ['Tramonto'] as well as the title piece, presumably a collective improvisation, also contain more lively invention. There is also an exception to the 'Peacock-rule', which is his 'Burly Hello' - a piece full of strongest possible rhythm, harmonic and melodic content - mostly of the bass!

Despite the ascetism, this _is_ a rather good disc, but Towner has definitely played in a more developed context. But, also Gary Peacock with e.g. K. Jarrett has unquestionably been far better than this.

To sum: friends of calm, peaceful, slow-moving and [mostly] rather simple (compared to the more complex parts of classical music or jazz) yet highly emotional and expressive music would like this much.