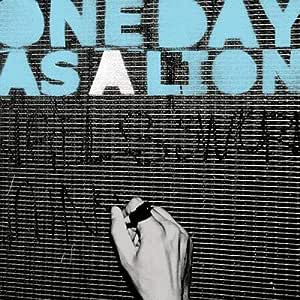 Amazon の One Day as a Lion ストア

4. If You Fear Dying

One Day As a Lion is the creation of musical comrades Zack de la Rocha & Jon Theodore. This is music about space - the space between friends and collaborators where ideas form; the space in a song where the tension builds waiting for the next wave of sound; the space in the corner of the recording studio where the sound gathers to fade and die. One Day as a Lion worked hard to capture that space on tape, unadulterated, unmolested, from heart to hand to skins to mic's to tape to speaker to ear. The result, someone said, sounds like Led Zepplin meets Dr. Dre.

After almost a decade of speculative anticipation on the part of his fans, Rage Against the Machine’s Zach de la Rocha finally returns to the studio, with former Mars Volta drummer Jon Theodore. It’s been a long wait, but if anything, the machine’s sway has only grown more insidious, and de la Rocha rises to meet it as if he hadn’t missed a beat. RATM fans will find all the familiar sonic and lyrical calling cards here, but One Day as a Lion is a mimeograph of neither contributor’s flagship band. "If You Fear Dying" and opener "Wild International" highlight this five-song, 20-minute set. Sharing nearly synchronized leading riffs, the two songs also take similar liberties with religious taboo: "I target more heads than a priest on Ash Wednesday" ("If You Fear Dying"); "I’m like a nail stuck in the wrist of their Christmas" ("Wild International"). In "Ocean View"--a heart-breaking, impressionist portrayal of the PATRIOT Act’s capacity for enabling new twists on the old story of racial profiling--de la Rocha’s wailing chorus glides atop a merciless cascade of thunderous drums. For those who follow either of these guys, everything here merits sustained attention. More generally, for those who like their protest music hard, loud, and in small doses, One Day as a Lion is king for a day, at least. --Jason Kirk

Anti- Records' One Day As A Lion is an on-going creative collaboration between two like-conscioused individuals. One Day As A Lion is both a warning delivered and a promise kept. A defiant affirmation of the possibilities that exist in the space between kick and snare. It's a sonic reflection of the visceral tension between a picturesque fabricated cultural landscape, and the brutal socioeconomic realities it attempts to mask. One Day As A Lion is a recorded interaction between Zack de la Rocha and Jon Theodore from Los Angeles, California. The name taken from the infamous 1970 black and white, captured by legendary Chicano photographer George Rodriguez featuring a center framed tag on a white wall.

Will. B
5つ星のうち4.0 ....or a thousand years as a sheep
2014年8月6日に英国でレビュー済み
Amazonで購入
It's Zach De La Rocha and Jon Theodore...how could this not be an amazing EP. After years of no new material from RATM and when Theodore left The Mars Volta I truly believe that music was not as good, I'm not saying that the rest of TMV albums were bad or that Audioslave was a bad super-group, but it could never be the same without these two brilliant musicians. As soon as 'Wild International' kicks in La Rocha hits hard immediately banging out his usual standard of intelligent, well pieced together rapping that carriers throughout the album until his last syllable. As per Mr. Theodore lays down hard and funky grooves that power through each track without letting up, he is a true testament to drumming ability and drum fitness and when the two play together there is magic in the air. Unfortunately it was only a 5 track EP which left me gagging for me, but as a lover of what both these musicians have given to music I was thoroughly impressed with these songs.
Essential Tracks:
Wild International
If You Fear Dying
続きを読む
1人のお客様がこれが役に立ったと考えています
役に立った
フィードバックを送信中...
フィードバックをお寄せいただきありがとうございます。
申し訳ありませんが、お客様の投票の記録に失敗しました。もう一度試してください。
違反を報告
レビュー を日本語に翻訳する

Hannibal Krueger Voorhees
5つ星のうち4.0 RATM + The Mars Volta
2017年9月5日にメキシコでレビュー済み
Amazonで購入
Here it is...finally. One Day as a Lion are Zack de la Rocha, lead vocalist (and current as of July 2008) for Rage Against the Machine, and Jon Theodore, former drummer with the Mars Volta. De la Rocha and Theodore have been reportedly working on this project since 2006. The end result is a volatile mix of rhythm, noise, and radical poetry. De la Rocha is no stranger to the great political poets; his brand of rapping and freestyling has always been saturated with their influence as well as his own constantly evolving political thought. Many of these writers are cited in the set's acknowledgements -- Jimmy Santiago Baca, Amiri Baraka, Sonia Sanchez, and Junot Diaz, to name just four. The name of the band comes from a near mythic photograph by the great George Rodriguez published in 1970: "It's better to live one day as a lion, than a thousand years as a lamb." The slogan is a tag centered in a frame on a white wall in Boyle Heights. Knowing this, you might believe you have an idea of what these songs are about, but you'd be wrong; you only think you do. Yes, these five songs, clocking in at just over 20 minutes, are an intense racket of sociopolitical noise. Theodore's drums add the taut, tightly wound pulse of the lion, the phrase, the breath, the heart of the sound, while de la Rocha's keyboards blurt, pulse, and skronk a post-9/11 warning siren throughout. Some nonsense has been made of this entire project being influenced by Led Zeppelin -- that seems to be the thing to write in 2008. Truth is, one track, "Ocean View," touches on Zep's mighty tune "The Ocean" in the melody of its refrain, but its lyrical content is in stark, even violent contrast to the former hard rock heroes as de la Rocha spits atop some mighty organic beats and squalling synths: "...Oceans of tears now rise aflame to tear them down/Oceans of past crimes now fill our hearts to tear them down...." It's poetry, it's political, it's mysterious -- until you sit down and let this killer track knock you flat on your back with its rage, power, and knowledge of reckoning. The rest you are going to have to check out, save to say that all five of these cuts are essential, pure kinetic anger motivated by love for people (to paraphrase Che Guevara). This is a five-cut call to arms. No matter what ultimately happened with One Day as a Lion, we now have this document, perfect in its short sparking length and raucous in its truth. Twenty minutes? How long was the first Sex Pistols album, 30 with some filler? How long was Grandmaster Flash's "The Message"? Eight? There isn't any filler here; it's all the aural ignition of a gasoline bomb going off in your ears.
続きを読む
3人のお客様がこれが役に立ったと考えています
役に立った
フィードバックを送信中...
フィードバックをお寄せいただきありがとうございます。
申し訳ありませんが、お客様の投票の記録に失敗しました。もう一度試してください。
違反を報告
レビュー を日本語に翻訳する