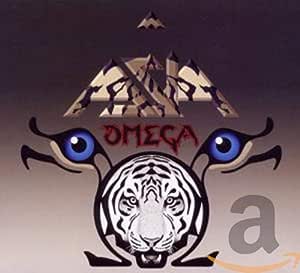 2010 album from the Prog Rock supergroup featuring all four original members: John Wetton (King Crimson/UK), Steve Howe (Yes), Carl Palmer (ELP) and Geoffrey Downes (The Buggles). While the band was an enormous success when they debuted in 1982, the original quartet fractured and Howe left in 1984. It wasn't until 2006 that the original foursome reconvened for a tour and then a new studio album in 2008. Two years on from that album, Omega finds all four members at a new creative peak. First pressing limited edition digipak including 1 bonus track! Frontiers.

Stotty
5つ星のうち5.0 Got me by the balls!!!
2010年4月26日に英国でレビュー済み
Amazonで購入
Wow, what a great album. So good is the quality of songwriting and musicianship on 'Omega', and so addictive are the melodies, hooks and choruses on offer, listening to this record is like spending an hour gorging on two tons of Ben and Jerry's ice cream.
Opener 'Finger On The Trigger' was a free download single and is a snorting rocker, very similar to 'Never Again' from Asia's previous album 'Phoenix', with some raw, jagged guitarwork from Steve Howe.
'Through My Veins' is a stark rock track with another great performance from Howe.
'Holy War, is classic Asia and works as a 'Wildest Dreams' for 2010. Nobody does war songs quite like Wetton and co. and the energy in this track alone blows raspberries in the face of the collective age of these musicians.
'Listen Children' and 'I Believe' are delightfully cheesy and 'There Was a Time' is one of the best bitter sweet ballads I've heard in a long old time.
Asia also show a bit of humour with the catchy 'Emily'.
'Omega' is packed with variety, there's everything here from big, stadium rockers, prog, pop and folk. It's a vibrant, lively album of music played by a completely re-energised group, full of confidence.
Steve Howe's guitarwork is outstanding throughout and John Wetton's vocal displays are stunning.
Roger Dean's artwork, just puts a cherry on the whole package.
Asia deserve some real success this year, and I hope they play a good chunk of this music on the tour because it's every bit as good as anything they've recorded.
And that's saying something.
続きを読む
12人のお客様がこれが役に立ったと考えています
違反を報告
レビュー を日本語に翻訳する

S. C. Trump
5つ星のうち5.0 The Omega Factor
2010年4月25日に英国でレビュー済み
Amazonで購入
I remember in 1982 when the Asia lineup was announced the hype and interest surrounding the release of the (still superb) debut album. Nowadays Asia albums come out with little fanfare which is such a shame as they contain wonderful songs, instrumentation and deliver what all good music should do, i.e. make the listener feel good after listening.

In the context of most other stuff that is released these days, I have to award this album five stars even though I prefer its predecessor; the excellent 'Phoenix' album released in 2008. We've also had three excellent Wetton/Downes albums as well in recent years, so we're really spoilt. On production duties here is Mike Paxman who for many years worked with Judie Tzuke as co-writer, guitarist and producer. Mike co-wrote the classic 'Stay with me 'til Dawn'.

Kicking off this album is the very familiar 'Finger on the Trigger' from the 2nd Wetton/Downes album 'Rubicon'. Why record again ? Simple answer; Steve Howe. The guitar licks added to this really take the stirring song to further dimensions. The intro is improved also.

'Through my veins' is a mid-tempo second song which is a great second song for an album. One of only two songs on the album not written by the prolific 'Wetton/Downes' partnership - this is a Howe/Wetton collaboration. One of my favourites.

'Holy War' is much faster which contains a wonderful instrumental break two thirds of the way through that showcases Carl Palmers virtuoso drumming alongside Geoff Downes' keyboards and Steve's unmistakable guitar.

'Ever yours' is a slow ballad in the same style as 'Heroine' from the 'Phoenix' album. John's voice is very well suited to these songs and it was a treat to see 'Heroine' performed live on the last tour - let's hope 'Ever yours' in put into the set as it would make a nice contrast to the louder numbers.

The anthemic 'Listen Children' is fairly standard Asia-fare; what never fails to delight is the instrumentation; time a time again what could be ordinary fares are given little bells and whistles that take them above the ordinary. Ecoutez!

'End of the World' contains a chorus with what appears to be two voices singing; the other is probably Steve Howe although he is not credited with vocals on the sleeve. No mistaking him on guitar though. "Auto da fe" is mentioned in the lyrics which is a first!

One of my favourite tracks on the album is the other Howe/Wetton composition 'Light the way' with its stirring keyboard intro before the drums kick in. Great lively song with harmonies and Howes guitar continually much to the fore.

`Emily' is billed as the bonus track included with the limited edition digi-pack release. It's an unusual track lyrically for Asia and includes the line "you bat for the other side" which doesn't refer to cricket. It also repeats the line KAZ53313 at the end; goodness knows what this means? I have to say that for me this is the weakest track on the album.

Much better is `I'm still the same' which is probably the most poppy track on the album where John manages to evoke the ELO sound, but is none the worse for this. Just a great tune which would not feel out of place on Ken Bruce's R2 show if only Ken's Producers could get to hear it!

`There was a time' has an intro that somehow reminds me of the soundtrack to `Lord of the Rings' (no bad thing). It's nearly four minutes before Carl's drums strike out. An epic track that is quite unlike anything Asia have served up before; unlike...

...`I believe' is probably the track that captures best the original Asia sound from the 80s. Completely in the `buy Asia, get this' vein. No surprise, just quality but why not? It's just great.

The album closes with `Don't wanna lose you now' which is surely a title that has been used on countless songs before (or something very similar). It's a relaxed end to the album in contrast to the uplifting `An extraordinary life' that closed out `Phoenix'. A lilting tune that you feel could be performed as a laid back rather than bombastic encore to a live show. Did I spot an alto trumpet somewhere in the mix towards the end?

So in summary, this is recommended again; the band is still relevant in 2010. Keep them coming please.
続きを読む
6人のお客様がこれが役に立ったと考えています
違反を報告
レビュー を日本語に翻訳する

Tony Roberts
5つ星のうち4.0 Step up from Phoenix
2010年5月13日に英国でレビュー済み
Amazonで購入
I'm going to put this on both the UK and the US amazon sites, since the reviews of this album are reasonably similar as at the time I'm writing this.

I've gone through other reviews on both sites and I think references to John Payne aren't valid or relevant anymore since he's gone and this Asia is what was at the beginning and is once more. Therefore I'm only going to make comparisons to Asia, Alpha, Astra and Phoenix.

Having given the debut album 5 stars I can only give this one 4 stars since its in no way comparable in content or quality, but its better than Astra and Phoenix which I'd say were 3 star albums.

Like Phoenix, and for that matter the other 'proper' Asia albums, this one starts with what is essentially the best track. A rousing rocking number with a good beat. 'Finger on the Trigger' lays the foundation to what is hoped to be an enjoyable musical experience (5/5). I had the same hopes for Phoenix but apart from the start, the end and one other, it was like a caramel bar; soft and sickly sweet in the middle. 'Through My Veins' was only marginally less than the opener (4/5), and that was because I didn't care much for the melody but Steve Howe's guitar play pulled this one through.

'Holy War' was a delight (5/5); top marks for John Wetton managing to get the word Trebuchet into a song. As a fan of history I enjoyed this one for its content as well as the melody and the racey beat. But then after this the album fell a little flat in the middle. 'Ever Yours' was too much like the sickly sweet offering from Phoenix. I liked this one the least (1/5). Things picked up nicely with 'Listen Children' (4/5), an upbeat number that had Yes-style chords to it towards the end with Geoff Downes' synths.

Then there was a relapse. 'End of The World' was reasonable (3/5), with a great anthemic intro but maybe a little too much of a Christian type of lyrics? The ending was nicely melodic. Then we had three consecutive songs that I thought were (2/5); 'Light The Way' had an average sounding melody and a harsh beat to the song which I found a little jarring. 'Emily' was reminiscent of a 70s pop song, at least Geoff Downes' piano was anyway, and the whole sound reminded me of Pilot. Did enjoy the story of the song with a man's lament of never being able to consumate his love of a woman as she was a lesbian. Nice Mona Lisa-type twist there. 'I'm Still The Same' ends the trio of songs I didn't really care much for, even though it does sound like an ELO song. I liked ELO but this song just doesn't sit well with Asia.

Thankfully came two good songs after this, (4/5). 'There Was A Time' certainly has a folk influence, and that's something I like and admire. I'm getting more into folk music these days and after seeing Jethro Tull live and am about to see Show of Hands, this track shows how much English folk music has been forgotten. We need more of these sort of things. John Wetton's voice is so versatile and superbly suits this style. 'I Believe' has a great start and carries on with a lovely foot-tapping, head-nodding beat. Its what I'd call Driving Rock. And I agree with other reviewers who state this should have been the album closer.

Finally a bit of a let down with 'I Don't Wanna Lose You Now', (2/5). Its a comfy pipe and slippers sort of song that really doesn't do much and this should never have been an album closer.
続きを読む
3人のお客様がこれが役に立ったと考えています
違反を報告
レビュー を日本語に翻訳する

P&J
5つ星のうち3.0 Rather average - but with a couple of good songs
2014年8月20日に英国でレビュー済み
Amazonで購入
I like John Wetton on vocals and this is a decent enough album. In my opinion it isn't a lot different from the early albums (Asia, Alpha...) which is not necessarily a bad thing as I enjoyed them. My favourites, 'Listen, Children' and 'Holy War', are both good and I will stick them on my i-pod playlists, the rest are average and I won't. 'Emily' - the bonus track - isn't a bonus, it's tacky and I dislike it.

Mrs. G. A. Sherwin
5つ星のうち4.0 Very good pop/rock from Asia.
2010年9月14日に英国でレビュー済み
Amazonで購入
I was not that impressed by the last album by the 'new revised original' Asia. It tried too hard to be like early 1980's Asia releases without being very successful. This album is much more independent of what has gone before. It sounds like they are having a jolly time just playing pop and having fun. Its much more upbeat and there don't seem to be any dud tracks.