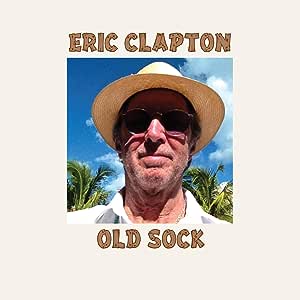 2013 release, the 21st studio album from the Rock legend and his first album since 2010. The album is a collection of some of Clapton's favorite songs spanning from his childhood to present day that highlights his vast appreciation and knowledge of music. From Leadbelly to J.J. Cale; Peter Tosh to George Gershwin; Hank Snow to Gary Moore and Taj Mahal, this record is a celebration of so many who have inspired Clapton's rich musical life. Clapton has always had a remarkable ability to recognize great songs and a gift for knowing how to uniquely interpret them, as he does on Old Sock. The album explores romantic standards of the 30's, Reggae, Soul, Rock, and includes a stand out playful collaboration with Paul McCartney, to create an experience that is quintessential Clapton. Old Sock was produced by Eric Clapton, Doyle Bramhall II, Justin Stanley and Simon Climie and features two original songs "Every Little Thing" and "Gotta Get Over. "

Andy Sweeney
5つ星のうち3.0 Putting his foot in it...
2013年5月7日に英国でレビュー済み
形式: CDAmazonで購入
I can understand why many Clapton fans feel disappointed by this album, certainly those who are more fans of his rock and blues material and those who prefer harder-edged music in general. When I first played "Old Sock", I was quite surprised at how gentle and sleepy this album is at times and wasn't sure about it at all. However, after I'd given it a few more plays, I realised that there is plenty here to like, but only if you also enjoy your music at a more relaxed pace and aren't expecting Clapton to be playing electrifying blues with any kind of fire in his belly. There are a few tracks which sound a little dated and have been given the gentle reggae treatment that Clapton favoured in the 1970's, such as "Further On Down The Road" which kicks of the album with a whimper rather than a bang, and the distinctly average "Your One And Only Man". Despite lacking any kind of edge, they're pleasant enough songs, although I'm well aware I'm damning them with faint praise. Sadly, that is the story of most of this album as there is far too much pedestrian content on "Old Sock" for it be regarded as one of Eric's better albums and there is nothing that really moves out of first gear.

The worst offenders on this disappointingly underwhelming album are the supposedly upbeat numbers, such as "Gotta Get Over", which lack the punch they should deliver, whereas the slower, more purposely relaxed songs actually sound rather lovely. "The Folks Who Live On The Hill", for example, is dreamy and romantic, "All Of Me" with Paul McCartney, is a charming rendition of the old standard, "Goodnight Irene" is genuinely likeable and "Our Love Is Here To Stay" is affably delivered. It is on the more crafted, subtle songs that Eric really excels and he manages to handle much covered material with taste and restraint. His tribute to Gary Moore, "Still Got The Blues" is superb. Eric could have gone for a straight forward cover, but his low-key, smoky rendition highlights the class and beauty of the composition. Sadly, "Every Little Thing" is, by far, the worst thing I have ever heard Eric Clapton release - an absolute abomination. I am not a great fan of artists adding a choir of children onto songs at the best of times, but rarely do they sound as cringeworthy, twee and sickening as they do on this song. A seriously bad mistake. I'm not exaggerating when I say that I felt digusted and nauseous when I first heard it. I've subjected myself to it again before writing this review and I can only say that my feelings are not only upheld, but they're possibly stronger in my hatred of this track.

So, is this a good album? No, not really. A bad album? I wouldn't go that far either. It's actually a rather confused mess of an album which lacks any real musical identity. Given my eclectic personal taste, I actually like what many of Clapton's fans may hate about the album, the slow, relaxed, mellowed-out Clapton adding subtle acoustic guitar licks to old standards and covers. People who particularly enjoyed the "Unplugged" album, for example, may find plenty to enjoy here. I can't help thinking that if the whole album would have been like that, it would have been a lot more likeable. A Clapton album of old standards would be divisive amongst his admirers, probably, but at least it would have been focused and cohesive. Anyway, it is what it is and there's no point in ranting about what Eric "should be doing". This is a musician approaching seventy years old who is making the music he wants to make and it's our choice whether to buy it and listen to it or not. There's just enough good music on this album for me to not regret buying it, but it's a close call.

Incidentally, "Old Sock", according to Clapton, is a term of endearment that older men address each other with - i.e. "Hello, old sock". I will have to take his word for it, as it's not something I have ever heard of before. Better luck next time, old sock.
続きを読む
2人のお客様がこれが役に立ったと考えています
役に立った
フィードバックを送信中...
フィードバックをお寄せいただきありがとうございます。
申し訳ありませんが、お客様の投票の記録に失敗しました。もう一度試してください。
違反を報告
レビュー を日本語に翻訳する

Andrew Grant
5つ星のうち3.0 I'm a long time fan...but...
2013年4月17日に英国でレビュー済み
形式: CDAmazonで購入
I have many Eric Clapton albums, from his early Yardbird days, Cream, collaborations with Buddy Guy, etc. This album hasn't quite done it for me. There's nothing wrong with it, the songs are well chosen, there's variety of styles, the musicianship is beyond question. It's just...well...another album. There's nothing on it that makes you think, wow, that was a brilliant track, or another great guitar solo!
There are plenty of people who will love this album, and judging by some of the reviews it's been getting, there are. It's not going to be the first E.C. album I'll be reaching for; not when 'Riding With The King', 'Me And Mr Johnson' and the like are sitting on the shelf very near by.
続きを読む
6人のお客様がこれが役に立ったと考えています
役に立った
フィードバックを送信中...
フィードバックをお寄せいただきありがとうございます。
申し訳ありませんが、お客様の投票の記録に失敗しました。もう一度試してください。
違反を報告
レビュー を日本語に翻訳する

V. Lyons
5つ星のうち5.0 Another excellent CD from Eric Clapton
2017年7月22日に英国でレビュー済み
形式: CDAmazonで購入
Another excellent CD from Eric Clapton, lots of good vibes, classic songs treated in his unique way. Gary Moore would certainly have liked Eric's version of 'Still got the Blues' for example. Top production as always. If you like Eric, you will want to have this one in your collection. Some negative comments about this one from some of his otherwise dedicated fans, couldn't see why.
続きを読む
1人のお客様がこれが役に立ったと考えています
役に立った
フィードバックを送信中...
フィードバックをお寄せいただきありがとうございます。
申し訳ありませんが、お客様の投票の記録に失敗しました。もう一度試してください。
違反を報告
レビュー を日本語に翻訳する

Mortyp
5つ星のうち4.0 EC was here
2013年8月18日に英国でレビュー済み
形式: CDAmazonで購入
Have been a fan of EC since his days with the Yardbirds. He has been through a number of incarnations over the years, some better than others. This CD is a strange and varied collection of numbers covering various styles and periods. Some work, some don't.
All done very professionally and skilfully, but I expected something better from Eric.
続きを読む
3人のお客様がこれが役に立ったと考えています
役に立った
フィードバックを送信中...
フィードバックをお寄せいただきありがとうございます。
申し訳ありませんが、お客様の投票の記録に失敗しました。もう一度試してください。
違反を報告
レビュー を日本語に翻訳する
その他の国際レビューを読み込む

Mr. Clifton Jones
5つ星のうち3.0 OK, But It doesn't Really Set The World Alight.
2013年5月3日に英国でレビュー済み
形式: CDAmazonで購入
This is a reasonable, somewhat pedestrian album which is pleasant enough, but does not show the fire Eric is still capable of producing in a live setting.

In response to some other comments, I'd like to point out that 'Goodnight Irene' is a Leadbelly song (considered by some to be one of the fathers of the blues) and as such it is totally appropriate for Eric to play it.
続きを読む
役に立った
フィードバックを送信中...
フィードバックをお寄せいただきありがとうございます。
申し訳ありませんが、お客様の投票の記録に失敗しました。もう一度試してください。
違反を報告
レビュー を日本語に翻訳する

sue ryan
5つ星のうち5.0 He can do no wrong
2014年4月13日に英国でレビュー済み
形式: CDAmazonで購入
I love this guy, he is the master, long may he keep singing and recording. Old Sock is like a new sock; fresh, comfortable and wearable. Bring on the other one. What more can I say,I am a Clapton fan
続きを読む
役に立った
フィードバックを送信中...
フィードバックをお寄せいただきありがとうございます。
申し訳ありませんが、お客様の投票の記録に失敗しました。もう一度試してください。
違反を報告
レビュー を日本語に翻訳する