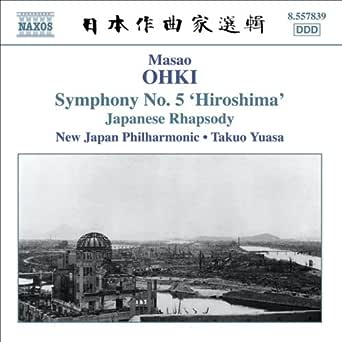 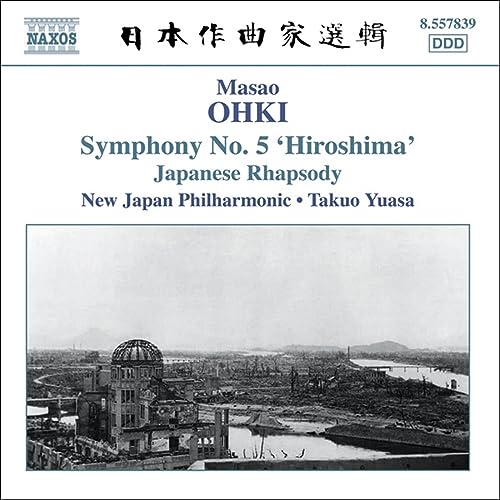 Art and Music Guy
5つ星のうち4.0 Arresting Hiroshima Symphony plus a nationalist occasional piece
2008年4月1日にアメリカ合衆国でレビュー済み
Amazonで購入
Ohki's Hiroshima Symphony is not particularly tuneful, so if you're interested in Japanese early 20th C. neo-Romanticism, only the first item on the CD will please you. In fact,the disparity of styles between the Rhapsody and the Symphony was shocking, but Ohki's nationalistic Rhapsody reminded me of the last movement of Shostakovich's 5th Symphony--its extrovert bombast has appeal when one is in such a mood. But the Hiroshima Symphony, being partly based on music for traditional Japanese theater is inherently more static and also more to the core of Ohki's character. The usual Naxos liner notes provide good biography of Ohki, and unlike official blurb releases,the full notes mention several times Ohki's equation of America and imperialism. His music should be explored more, if only to understand the context of what the notes hint at, and what his abstract and affecting music says. Perhaps we are far enough removed from the events that his Hiroshima Symphony may fail to shock as it apparently once had, but with the movements' subtitles, there can be no mistaking the brutality and poignancy that his expressionistic music was aiming to achieve. So I feel I ended up buying this for its historical value and I enjoyed it for its ability to parse its historical milieu with a matching technique.
続きを読む
3人のお客様がこれが役に立ったと考えています
違反を報告
レビュー を日本語に翻訳する
すべてのレビューを参照します