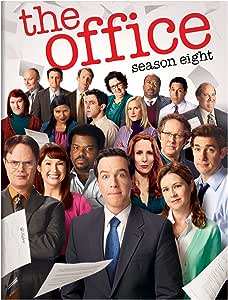 Andy takes over as manager of Dunder Mifflin and finds the job to be more than he bargained for. He wants to win the respect of his employees, while going toe-to-toe with Robert California, the enigmatic new CEO, who wants to turn the office into his personal playground. Dwight makes his own grab for power when he leads a team to Florida to work under Nellie Bertram, who may be slightly out of her mind. Jim and Pam's relationship is put to the test when Pam goes on maternity leave and her replacement has eyes for Jim. Meanwhile, Erin harbors lingering feelings for Andy; Angela's relationship deepens with her dashing (state) senator; and Darryl looks for love in the warehouse. Developed for American Television by Primetime Emmyr Award winner Greg Daniels (Parks and Recreation, The Simpsons), watch all 24 episodes back-to-back in this 5-disc set, with outstanding bonus features including extended episodes, deleted scenes, webisodes, Football Championship promos and more!

C. Malone
5つ星のうち3.0 Such a disappointment...
2014年4月17日に英国でレビュー済み
Amazonで購入
(Spoilers) I am an avid fan of 'The Office' and have watched seasons 1-7 countless times. I have often tried to convince fans of the original British series that, while a very different show, the American 'Office' is both funny, endearing and emotional. HOWEVER - this season is clearly the weakest, the audience knows it and I get the feeling the cast and writers know it too. It just feels like everyone's not really trying anymore... the characters seem to be exaggerated and cartoonish (they've lost that human quality that made them relatable and familiar), there are far too many new and badly established characters, the jokes/pranks seem over the top and at times ridiculous and the storyline has no stability or direction.

I believe Ed Helms (Andy) received unfair criticism after being thrust into the 'manager' spot-light; after all, who really is able to fill Steve Carell's shoes? I genuinely enjoyed the opening episode to the season with Andy as manager, the team bonded with him well and it felt like an equilibrium was forming, providing stability that the show desperately needed after Steve's departure; I was hopeful and excited to watch more. The introduction of James Spader's character (Robert California) at the end of season 7 was excellent, he was intense, dark and hilariously weird; I was left hoping that he would get the job. So I was thrilled to see that he was playing a key role in season 8 as, not only the manager, but the new CEO of the company. California provided some fantastic comedy moments in the season that got me rolling about with laughter (although these were desperately few and far between) but I felt his character was toned down from the harsh, uncompromising man that was introduced to us, which was a shame.

The season started with some good ideas and a solid basis: Andy as manager and Robert as CEO. Andy becomes more confident in his new role, he's supportive and protective of his employees who are, in turn, happy with their new boss and show compassion when he doubts himself...AND THEN everything is completely turned on its head.

First of all Nellie Bertram - I cannot begin to describe how frustrated and disappointed I was to see that Catherine Tate's character (introduced during the interview process at the end of season 7) was anywhere near this season. Her introduction in the previous series was frankly embarrassing... she was dramatically unfunny and irritating, I found myself cringing for all the wrong reasons. Not only are we subjected to her for a few episodes, but she heavily features throughout the season; there are even occasions where you think (and pray) that she'll be fired/leave the show and are bitterly disappointed. The writers couldn't seem to decide how they wanted the audience to react to her. Initially, the other characters detest her too, she is rude, unpleasant, annoying and arrogant; but then there is a very poor attempt to somehow make her likeable despite her terrible character and that fact that she is directly responsible for Andy losing his job. And then.... she just stays, she doesn't go away, like a persistent and unrelenting itch. The most satisfying part of the entire season is where Andy and Erin lose it over the manager switch and end up shouting at her and Robert, trashing the office and smashing a picture of her - hooray! It is a shame that after that, you guessed it... she doesn't leave, she stays...and stays...

The decision to have a dual storyline with the opening of a Dunder Miflin/Sabre store (much like the Apple store) was an interesting idea. Yet ANOTHER new character is involved: Cathy Simms, Pam's maternity replacement. I felt so sorry for actress Lindsey Broad, who was basically given the pantomime villain to play - a woman who tries to seduce Jim despite knowing that he is married with two young children. She is written purely for the audience to detest (which is not necessary considering the abundance of unpleasant characters in this series - did I mention they bring Packer back?)
Erin is given some screen time to develop her character and her relationship with Andy which was a nice idea but wasn't exactly handled well - again over the top writing.

It's not ALL bad, there are some funny/good moments (for example Creed's response to Toby's self defence training had me in absolute stitches!) but when you compare episodes from this season to classic episodes such as: 'The Dundies', 'Casino Night' and 'The Dinner Party' - there really is no comparison at all.
Having waited so long for the Region 2 release to become available and being so disappointed by this season, I just hope season 9 and the finale of my favourite show will be handled more sensitively. Please don't let me down writers!

Steaming Punk
5つ星のうち2.0 An Utter Mess
2014年4月16日に英国でレビュー済み
Amazonで購入
I have two or three episodes left to watch of the series and I'm desperately hoping that they elevate my rating of this very poor series.

The Office has become an utter mess. The majority of the episodes of this series are very poor with very few laugh out loud moments mostly from Dwight.

To be fair though, we are at Season 8, there's only so much that can be done. The plots are farcical with a handful of interesting plot lines that seem to just disappear or fizzle out. The Andy and Erin stuff is insulting and Catherine Tate's role is disgustingly bad.

I feel like the writers forgot the name of the show. The first few series had some semblance of reality and structure which helped the comedy. That's all gone now. It's all a bit random.

I'm disappointed but, deep down, I knew that it would be a further step on the steady decline of this once great series.
続きを読む
1人のお客様がこれが役に立ったと考えています
違反を報告
レビュー を日本語に翻訳する

Dave Davies
5つ星のうち3.0 Miss Michael!
2014年6月26日に英国でレビュー済み
Amazonで購入
Not a bad season, think they drag some characters out a bit- the slimy new manager guy (cant even remember his name) would have made a better interesting member of the floor/sales team as opposed to being in charge. It doenst quite work on screen for me. Although Michael was a bit mad, you could almost believe there are people like that up and down the office of the world.

Mrs. Brown
5つ星のうち5.0 Just gets better and better, even without Michael Scott
2014年5月6日に英国でレビュー済み
Amazonで購入
This arrived super quick, which was great as we wanted to watch it as soon as we could. Love The Office USA. This is good value as there are 5 discs (I think) and plenty of episodes on each one, plus there are the bloopers which are hilarious - I don't know what's funnier, the actual episodes or those! There are also deleted scenes and some other stuff too. Buy these!
続きを読む
違反を報告
レビュー を日本語に翻訳する

Ford Prefect
5つ星のうち4.0 A bit lost
2017年10月12日に英国でレビュー済み
Amazonで購入
I felt as if this great series finally ran out of steam. The plot lines became a bit implausible. Still enjoyable, but not quite the same. One extra star, though, for the lovely Erin in her swimsuit at the pool party. Andy, you're a lucky man!
続きを読む
違反を報告
レビュー を日本語に翻訳する
すべてのレビューを参照します
トップへ戻る
Amazonについて
Amazonでビジネス
Amazonでのお支払い
ヘルプ＆ガイド
日本語ショッピングのための言語を選択します。 日本ショッピングのための国/地域を選択します。
© 1996-2020, Amazon.com, Inc. or its affiliates