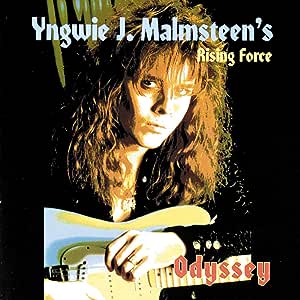 Mr. Md Kemp
5つ星のうち5.0 The Rising Force Is Strong
2011年4月30日に英国でレビュー済み
Amazonで購入
I have to give Yngwie credit for writing this album during the same year he smashed his car into a tree and went into a coma with damages to his limbs and nerves. This is one of those albums that you can play through from start to finish without skipping a track. From the mental opener of Rising Force to the soft and relaxing acoustic outro Memories, Malmsteen and co showcase a whole new way to play heavy metal. 2 ballads are featured on this album including Hold On and the very popular Dreaming (Tell Me). Also included is the hit single Heaven Tonight which is awesome!. The album does have its fair share of catchy tunes including the insane Riot In The Dungeons, the fast drum beats of Deja Vu, the highway blaster Faster Then The Speed Of Light, the supercool Crystal Ball and the catchy Now Is The Time. And we get not one but four instrumentals including Bite The Bullet, Krakatau, Memories and a 60 second intro to Riot In The Dungeons.

Yngwie Malmsteen and his Rising Force are showing us that although it may be the 80's, you can still have fun with heavy metal and enjoy it 20 years later.
続きを読む
8人のお客様がこれが役に立ったと考えています
違反を報告
レビュー を日本語に翻訳する

Yaniv Riahi
5つ星のうち5.0 The great era from Yngwie
2013年1月2日に英国でレビュー済み
Amazonで購入
Great record, Yngwie is great, Turner's vocals are great, great tracks. Love the 80's.
Top tracks are: 'Faster than the Speed of Light', 'Krakatau', 'Riot in the Dungeons' and 'Rising Force'.
This album should be at any neo-classical and power metal fan, and this is one of his best albums, so if you don't know him you can start with this.
続きを読む
4人のお客様がこれが役に立ったと考えています
違反を報告
レビュー を日本語に翻訳する

gunderad
5つ星のうち4.0 The best Malmsteen album!
2014年1月19日に英国でレビュー済み
Amazonで購入
In my opinion the best Malmsteen album, together with his debut album. Joe Lynn Turner really made a difference on this album. Too bad their collaboration only lasted one album.
続きを読む
1人のお客様がこれが役に立ったと考えています
違反を報告
レビュー を日本語に翻訳する