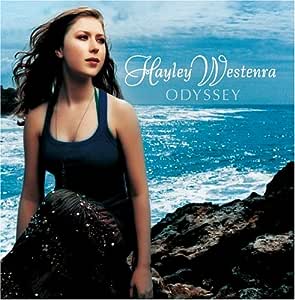 9. She Moves Through the Fair

10. My Heart Belongs To You

Hayley Westenra's new album Odyssey was always going to be a different proposition to Pure, the record-breaking 2003 collection which marked her international debut. A lot has happened to the young New Zealander over the past two or three years--and those changes are clearly reflected by a record which encapsulates her growth from a budding teenage prodigy into a mature young woman.

Now, at 18, Hayley is ready to show the world how much she has grown up, both as an artist and as an individual. Fans of Pure will be pleasantly surprised by her new album. Her wonderful voice retains its crystal-clear purity, but Westenra's singing is now richer and more rounded than before. Touring the world and singing in some of its greatest concert venues, such as the Sydney Opera House, Royal Albert Hall, and Carnegie Hall, has worked wonders for her confidence. Suitably emboldened, she has embraced an even wider range of musical styles including classical, hymns, folk and pop."I was happy with Pure at the time, but I've moved on so much," says Hayley. "It's really exciting to have something new out there for people to listen to. I wanted to make a record that represented me as a person. And I think I've improved as a vocalist."Variety is certainly one of the keywords with Hayley's new album. When she first entered a recording studio in New Zealand as a 12-year-old, Westenra restricted herself to classical pieces and show tunes. Now, in addition to impressive takes on classical works, Hayley uses her new album to perform an inspired cover of Joni Mitchell's "Both Sides Now" and has arranged and written much of the material. "I like to push myself, and I'm now confident enough to try different things. I have been much more involved behind the scenes with this album--I wanted to put my individual stamp on each song."With her career stretching out promisingly before her, Hayley is also keen to continue experimenting. She is still primarily a classical crossover artist but she also wants to keep broadening those musical horizons. Three years after her international debut CD, Hayley Westenra is still pure: she exudes pure quality and she remains pure class--but her musical journey continues with her new album Odyssey.

Kindle Customer
5つ星のうち4.0 Does she get stronger?
2015年3月13日 - (Amazon.com)
形式: CDAmazonで購入
Loved it, but Hayley certainly has a lot of work to do (I realize this is not her latest stuff). Hayley's best work in this compilation owes itself to masterful administration - but also, she is really a good singer. I would have liked to have heard more of her and less of all the people backing her up and coddling her.
Special thanks to Andrea Bocelli for being the vibrant stag to Hayley's tiny butterfly in Dell' Amore Non Si Sa. I loved the piece even as I recognized she was in no way as strong a singer as he - at least, not the way it was presented. I'm going to blame whoever decided to do the sound for them and give the singers a double thumbs up for giving me a chance to overload my BF with unmitigated cuddles.

Tanya L. Osterman
5つ星のうち5.0 Best Version of Odyssey
2006年9月16日 - (Amazon.com)
Amazonで購入
Hayley's voice is lovely. That word just fits it perfectly. So very lovely in lower as well as higher pitch! I bought the UK version of Odyssey mainly to get O Mio Babbino Caro; and while Hayley's verison may not be the best ever, she does it justice and brings her own unique sound to it. I also got The Water is Wide, which is fantastic, as well as Scarborough Fair and She Moved Through the Fair. Oh and Lascia Ch'io Pianga, also quite pretty and peaceful. Otherwise, May It be (Enya's song from Lord of the Rings), which is very prayerful, and Laudate Dominum (there are no words to describe it - it must be experienced!) are highlights. Newer style songs for Hayley include What You Never Know and Both Sides Now. In the latter particularly, she has an emotional depth to her voice that makes you believe in her song. WONDERFUL! I don't think the range of her voice is more obvious than on Quanta, Qualia, which is almost unbelievable. If you're in doubt, buy this (version of this) CD!
続きを読む
5人のお客様がこれが役に立ったと考えています
レビュー を日本語に翻訳する

Savvy shopper.
5つ星のうち5.0 An amazing voice range and beautiful lyrics.
2016年10月16日 - (Amazon.com)
Amazonで購入
I had no idea who this young lady is until I spent a month listening to her music and found a song done with Andre Bocelli and happened to find her autobiography. A hautingly beautiful voice and voice range that is astounding. One caution....I purchased an remake on Amazon Prime of one of her other albums and the words are virtually impossible to understand. I failed to listen to a sample before purchase.
続きを読む
1人のお客様がこれが役に立ったと考えています
レビュー を日本語に翻訳する

Mas Toyoda
5つ星のうち5.0 Another cd for my collection.
2019年10月14日 - (Amazon.com)
形式: CDAmazonで購入
Nice easy listening cd. She has one of the purest voices in the world. There is a good mix of music.
続きを読む
レビュー を日本語に翻訳する