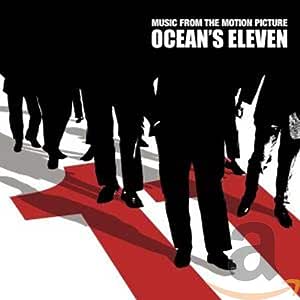 The idea of remaking the Rat Pack's infamous shaggy-dog story cum Vegas heist thriller may have seemed ludicrous without a Rat Pack. But that didn't deter ever-inventive director Steven Soderbergh, who's again wisely teamed up with not only Out of Sight star George Clooney but also that underrated project's Irish-born club mixer turned scorer David Holmes. The resulting soundtrack is a spunky, cross-cultural joyride that careens from Perry Como's "Papa Loves Mambo" to the loopy hip-hop of Handsome Boy Modeling School's "The Projects", while paying some gratifying visits to Percy Faith, Arthur Lyman, Quincy Jones, the terminally cool Claude Debussy and, of course, King Elvis along the way. Holmes' own concoctions are as smartly retro-hip and seamless, slyly intertwining cool jazz-funk and smoky cine-Muzak with some dance-floor grooves that keep the musical tension boiling. The sharp dialogue snippets that bubble throughout seem a quirky throwback to soundtracks gone by, a sometimes oversized olive in Holmes' inviting musical cocktail. --Jerry McCulley

Cool is back, on screen and on record, with "Ocean's Eleven," an all-star remake of the 1960 Rat pack Las Vegas-heist flick. With a score and songs by groove-funk club favorite David Holmes; vintage '60s tracks from Elvis Presley, Perry Como, etc.; hip-hop from Handsome Boy Modeling School and intriguing exotica, both new and old, the soundtrack album "Ocean's Eleven" is New School Cool.

Aeomer
5つ星のうち2.0 Show your love for the tracks by sourcing them elsewhere.
2016年3月5日に英国でレビュー済み
Amazonで購入
It's a frequent device to place dialogue from a film on its soundtrack, but this takes the process to an entirely new and alarmingly bad level. Instead of simply placing dialogue tracks between the music, as is common practice, this mix stamps the talking over any point in the track. This could have been done subtly, but wasn't. The process used on this album has a number of flaws. The worst sin is the levels for the dialogue do not match the track - this is recording engineering 101 rookie mistake. Instead of enhancing each track, the listener is waiting for voices to begin shouting over the music at random moments instead of enjoying the excellent music beneath. The listener cannot relax, waiting, as they say, for the other shoe to drop. The dialogue itself seems to have been sourced by using an old cassette recorder to record whilst sat in front of a forty year old TV with a mono speaker turned up to distorting levels whilst playing a well worn VHS rental copy of the movie. Hiss, thy name is Ocean's 11.
At this point you may be thinking all this was done to protect some copyright clause written by your typical music industry neanderthal rights lawyer (I known a few; all have low foreheads and the ability to cut-n-paste from other people's work - mostly mine!). However, the track "A Little Less Conversation" has enough added reverb to convince me all the faults with this recording are down to a poorly trained monkey mixing the entire thing in Garage Band v1. We're not talking a subtle, but misguided, attempt to hide some flaws in the track, but enough reverb and "alpine echo" to initially make me believe my equipment had developed a fault. My advice to you is to take a note of the tracks you like, legally source the original, and build yourself a playlist without all the ridiculous over processing that went into this plastic tea coster.

offshoregirls
5つ星のうち4.0 great music...! but personally, shame about the film extracts...
2014年7月11日に英国でレビュー済み
Amazonで購入
the music is brilliant, full of good smooth tunes.. somewhat spoiled by the film extracts/talking, its ok once but after that, i just wanted to hear the tunes..! if wanted the film excerpts i would watch the film....... i find myself fast forwarding the excerpts so its a bit annoying to me personally, they should have released two versions, so that you could just get on and listen to the music which is why i bought it in the first place, i would have liked to be able to choose between a film quotes/non film quotes cd..! you can guess which one i would have picked eh........
続きを読む
1人のお客様がこれが役に立ったと考えています
役に立った
フィードバックを送信中...
フィードバックをお寄せいただきありがとうございます。
申し訳ありませんが、お客様の投票の記録に失敗しました。もう一度試してください。
違反を報告
レビュー を日本語に翻訳する

His Lordship.
5つ星のうち4.0 Soundtrack CD of Oceans Eleven
2013年3月14日に英国でレビュー済み
Amazonで購入
I really only bought this CD for two tracks (the Elvis Presley's A little less conversation re-mix and Debussy's Clare De Lune). Apart from just a few words spoken by the Actors on a couple of the tracks, I found that the disc had a good selection of tracks from the film, some of which were longer than I expected and really well produced, used, I suppose, as background music in the film and therefore missed when watched. All in all a good record and well worth the price.
続きを読む
役に立った
フィードバックを送信中...
フィードバックをお寄せいただきありがとうございます。
申し訳ありませんが、お客様の投票の記録に失敗しました。もう一度試してください。
違反を報告
レビュー を日本語に翻訳する

Richard Brown
5つ星のうち1.0 Worst Soundtrack Album - Ever
2008年9月23日に英国でレビュー済み
Amazonで購入
Having recently watched the film - I thought "Mmm. I bet that'll be a cool soundtrack to listen to." Err. No. Unfortunately we have Mr Clooney & Co yapping over the intros and run outs of the tracks.

I bought this because I wanted to hear the music - not a bunch of actors talking over it.

Gerrard
5つ星のうち1.0 This ISN'T Just a Soundtrack CD - It Includes Movie Dialogue!
2014年8月22日に英国でレビュー済み
Amazonで購入
This soundtrack is lifted directly from the film so the music has movie dialogue over it. Not what I wanted, expected or have heard of before with other sound track CD's. Very disappointed. If you just want the terrific music that is used in the movie, DO NOT order this.
続きを読む
役に立った
フィードバックを送信中...
フィードバックをお寄せいただきありがとうございます。
申し訳ありませんが、お客様の投票の記録に失敗しました。もう一度試してください。
違反を報告
レビュー を日本語に翻訳する

Julie W.
5つ星のうち3.0 Ok
2014年3月29日に英国でレビュー済み
Amazonで購入
Great music but spoilt by all the talking over the tracks. Got very annoying so now looking for an alternative to get David Holmes songs that I really liked. Arrived promptly.
続きを読む
役に立った
フィードバックを送信中...
フィードバックをお寄せいただきありがとうございます。
申し訳ありませんが、お客様の投票の記録に失敗しました。もう一度試してください。
違反を報告
レビュー を日本語に翻訳する