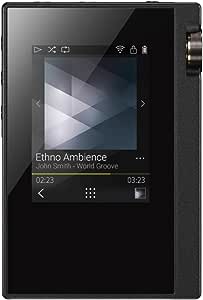 Robert
5つ星のうち2.0 Great - not great
2018年10月15日にカナダでレビュー済み
Amazonで購入
Sound is awesome, but Japanese sourced units have no Tidal or MQA access even though it's the same chipset as US models which do Tidal/MQA.
続きを読む
1人のお客様がこれが役に立ったと考えています
違反を報告
レビュー を日本語に翻訳する

Technocrafts
5つ星のうち5.0 Big player for small pockets...
2017年10月4日にアメリカ合衆国でレビュー済み
Amazonで購入
Since I purchased my unit, it's price dropped out of the sky, for little over $250 as I have seen a few days ago, there's absolutely no reason not to recommend it. It comes with few accessories; charging cable, manual and two screen protectors. The body of the unit feels sturdy and durable, the plastic back cover though makes it feel cheap, kind of eccentric in appearance. The ultra - portable small form factor is sweet, reading the specs makes one wonder, how they managed to cram all the components in such a tiny box...The small touch screen works well with the sleek, slim and snappy interface, complimented by well placed physical buttons to make the player functional and practical from every aspect. The user interface includes a shortcut to raise the volume when the player serves as audio component, via headphone jacks as line out. The 2.5 mm TRRS balanced port offers some minute enhancements compared to the single ended heaphone port, and far better signal strength, as expected. I'm using the active ground control option from the balanced port, I find it slightly better than the "balanced" option, and never looked back since I started using the TRRS port. As far as sound performance, the sound produced is very detailed and analytic, with a natural and neutral tone, and a tadbit narrow sound stage. I can't comment on the 10 band equalizer, I never attempted to use it, I'm happy with the natural sound the player offers, when ALAC, WAV, IAFF files are played. The file transfer rather sluggish, but the reason for that could be my aging micro SD card, I just simply pulled a 128GB card out of my iBasso DX90, and transferred it to the brand new, just unpacked Rubato, and fired it up. It took considerable amount of time for the player to create the database for playlist, in fact, I had to disable the "auto sync" feature to prevent it from crashing repeatedly. The second firmware update was recently released, which appear to resolve other nagging issues I don't have the time and space here to list. Overall, I find this little gem a very strong performer, and an addictive toy. Solid five starts, and two thumbs up for the Onkyo design team!
続きを読む
14人のお客様がこれが役に立ったと考えています
違反を報告
レビュー を日本語に翻訳する

Giorgi
5つ星のうち5.0 Super DAP within a reasonable budget!
2017年10月26日にアメリカ合衆国でレビュー済み
Amazonで購入
I needed a DAP from a well-known manufacturer, with twin DAC, an impressive memory capacity, with Line-Out to connect to a home stereo amplifier, with an ability to play DSD files, aptX support, relatively inexpensive, and with a solid look. I was going to buy a DX80, oldest AK100, or a newest Fiio X5, but I read somewhere that Onkyo has this model in their 2017 production line. When I realized that there will be an MQA support, a dedicated control app (!), and when checked its price on Amazon, there were no competitors left to even think of.

This one is fitted with dual ES9018C2M DACs, 16GB of internal memory (expandable to a 416GB), a balanced 2.5mm headphone socket, and line-out socket alongside the standard 3.5mm output. Its dual-band wi-fi allows streaming from online music services such as preinstalled Tidal, Tunein & Deezer, it also has hi-res Bluetooth via aptX. File support is extensive, ranging from MP3 to FLAC, AIFF (to a maximum of 192kHz/32bit), DSD 5.6MHz/2.8MHz and even MQA!

From my experience, it excels with DSD playback, I haven't tried MQA so far. DAP's dual clocks allow hi-bit upsampling to adapt for best results, for instance you can upsample a standard 44.1 KHz FLAC to a 88.2 KHz and higher!
Hope this helps -- Cheers!
続きを読む
8人のお客様がこれが役に立ったと考えています
違反を報告
レビュー を日本語に翻訳する

JRW558
5つ星のうち4.0 Domestic - Japan. You may think your device is defective!
2017年11月16日にアメリカ合衆国でレビュー済み
Amazonで購入
JAPAN
This is a best value portable player. Onkyo has refined it to do exceptional music playback only and not be an additional smart phone in your pocket. If your intentions are to use this unit for streaming online audio please be aware this import sold as Domestic Japan Will Not work for online services in the United States. Onkyo has told me their models are licensed by country. Being very eager to stream Tidal MQA and store music for off-line listening was not an option. Wait for Amazon to offer domestic DP-S1 or look elsewhere. Hope this helps your search for “audio nirvana.”
続きを読む
13人のお客様がこれが役に立ったと考えています
違反を報告
レビュー を日本語に翻訳する
すべてのレビューを参照します
同様の商品をご覧になりませんか？ こちらのリンクで参照ください。レビュー高評価商品 ポータブルデジタルオーディオプレーヤー、レビュー高評価商品 ポータブルオーディオ、バランス接続 イヤホン、オンキョー イヤホン
Amazonプライム会員ならお急ぎ便、日時指定便が使い放題
さらに、映画もTV番組も見放題。200万曲が聴き放題 。クラウドに好きなだけ写真も保存可能。
> プライムを無料で試す