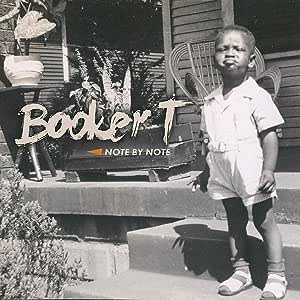 In an emotional musical journey, Booker T explores new takes on the songs that make up the fabric of his musical identity. Largely mirroring the chapter titles from his forthcoming memoir Time is Tight, the album titled Note by Note serves as a musical companion. STAX staples like Cause I Love You and These Arms of Mine are woven into defining musical moments from Booker's journey after STAX, when he produced and recorded with artists as diverse as Willie Nelson and Carlos Santana. Booker T & the M.G.'s fans will enjoy a new ending to the song Time is Tight, a Romanesque coda that has been played live yet never recorded. The album culminates with new original music, highlighting the soaring guitar and vocals of Booker's son and collaborator Teddy Jones. Booker T is a 4 time GRAMMY Award winner (including the Lifetime Achievement Award), Rock and Roll Hall of Fame Inductee, and arguably the most famous Hammond B3 player in history.

Luigi Facotti
5つ星のうち5.0 Booker T.'s Hammond B3 in all its nuanced glory.
2019年11月14日 - (Amazon.com)
Amazonで購入
‘Note by Note’ is Booker T. Jones’ 9th solo album since formally leaving Stax Records and the M.G.s. From one who has stood in awe of Booker T’s effortless skills on the Hammond M3/B3 organ since “Green Onions’ was released, this album is the best Booker T. album overall since 1984’s ‘Evergreen’. Adding the M.G.s, it is the best since the Booker T. and the MGs, 1994 Columbia set ‘That's The Way It Should Be’ with Steve Cropper and Duck Dunn.
The standout track on ‘Note by Note’ - released incidentally on Mr. Jones own Edith Street Records - is a 9-minute version of ‘Time Is Tight’. Written by Mr. Jones in Paris for the soundtrack of the movie, ‘Uptight’, this seminal version, as noted in the CD notes is “the way I conceived it in my fantasies and dreams… [including].. my Romanesque Coda for brass, never before recorded in a studio”. ‘Time is Tight’ has an interesting history - a major hit on 45 in 1969 (#7 R & B, #6 pop), the original album version was recorded on a Paris film soundstage onto 35 mm film and subsequently re-recorded in Memphis as Mr. Jones viewed the Paris recording “of lesser quality than our previous recordings in Memphis”. This led to rumors of two versions of the ‘Uptight’ soundtrack - the Paris soundstage version and one re-recorded at McLemore Ave which inevitably led to rumors that the Paris version was significantly different to that finally released in much the same way that Isaac Hayes’ MGM recording of the soundtrack to ‘Shaft’ was very different to the one recorded in Memphis for Enterprise. In his insightful and introspective 2019 memoir ‘Time Is Tight’ - which was released to accompany this CD (and vice versa) - Mr. Jones notes that the 45 hit version of ‘Time Is Tight’ was the Stax studio version while that on the album was the original from the Paris sessions.
Unlike several of Mr. Jones more recent CD releases on Anti and a revitalized Concord Stax label, the B3 is (along with Mr. Jones’ piano on several of the tracks) mixed way upfront rather than being left deep in the mix making the whole album a sheer delight. That said, this album is somewhat eclectic in content ranging from remakes of major Stax/Volt hits which Mr. Jones wrote or was associated with – ‘B-A-B-Y’, ‘Cause I Love You’, ‘These Arms of Mine’, ‘Born Under A Bad Sign (with Booker T. on vocals - a real tour de force) to post-Stax recordings – ‘ I Want You’ (A& M), ‘Stardust’ (produced for Willie Nelson) and Havana Moon (produced for Carlos Santana) – to two tracks featuring Mr. Jones’ son, Teddy on guitar. Another absolutely outstanding track is Mr. Jones’ bubbly gospel organ infused ‘Precious Lord’ with Sharlotte Gibson on vocals, a reminder of the occasion in 1956 when Mr. Jones at age 12, accompanied the gospel legend, Ms. Mahalia Jackson, on piano in Memphis with the same song.
The sound on this CD is superb which leads to a note of regret – that of the need to remaster more of Booker T. and the M.G.s Stax output to the standards of this CD and to the already remastered versions of “McLemore Ave’ and ‘Green Onions’ by Joe Tarantino. A remix of the 1998 3CD boxed set also titled ‘Time Is Tight’ would be most welcome, especially if some of the live material on CD3 could be replaced with other material. Neil Young and Boz Scaggs are poor substitutes for Otis Redding.
Hopefully this will not be the only Booker T. release on Edith Street Records and we can perhaps look forward to new versions of “Green Onions’, ‘Soul Limbo” and ‘Melting Pot’ along with new material with Mr. Jones’ B3 closely miked in center stage. A great CD.

Gaylen Halbert
5つ星のうち5.0 Thanks Booker T.
2019年11月26日 - (Amazon.com)
Amazonで購入
I like this album so much I am ordering two more to give as gifts. Good sound quality and a fresh take on some great songs----- and Booker's vocals sound pretty darn good.
続きを読む
1人のお客様がこれが役に立ったと考えています
レビュー を日本語に翻訳する