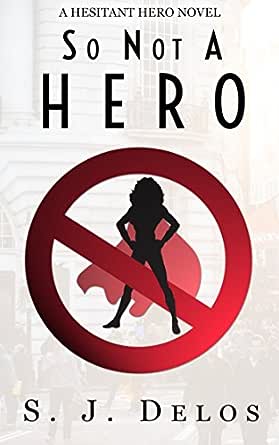 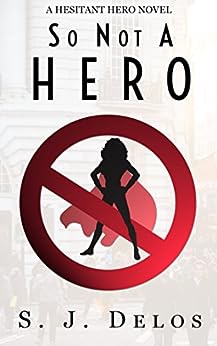 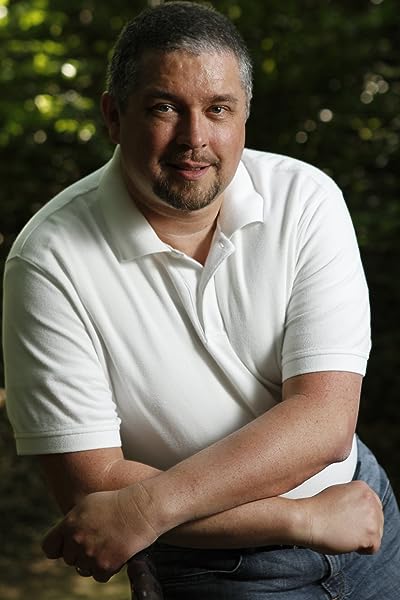 A reformed villain.
After serving two years in a Federal prison, Karen Hashimoto is out on parole and eager to put her criminal past behind her. No easy task, since she’s also the former supervillain known as Crushette. A chance encounter leads to an unexpected opportunity, and she is recruited as the newest member of the city’s premier team of superheroes: The Good Guys.

A new hero.
Now Karen has new teammates, a new code name, and the daunting responsibility of trying to be the hero everyone thinks she can be. Becoming a champion for Truth and Justice is going to be rough, especially for the ex-girlfriend of the notorious Doctor Maniac. Karen will have to do everything in her powers to keep her past from ruining her future.

It was so much simpler being the bad guy.

S. J. Delos has always been a fan of comic books and superheroes and enjoys making up his own stories. He lives in Greensboro, North Carolina, with his wife and two sons.

Angela Brazil is a professional actor who is proud to be a long-standing member of the Resident Acting Company at Trinity Repertory Company. She also teaches at the Brown/Trinity Conservatory. Angela lives with her family in Lincoln, Rhode Island.

John
5つ星のうち3.0 Flawed heroine, decent writing, a good set up for something more
2017年11月22日 - (Amazon.com)
Amazonで購入
The writing is decent, the character seems real - dysfunctional, has problems, maybe a bit toxic - but real and interesting enough to spend time with.

I actually thought it was interesting that for once - because of the character's issues and personal problems - the romance book trope of "meet handsome guy and almost instantly have hot passionate sex with them" actually made sense for the character in this case. It still felt a little weird when the graphic sex scene came up in the middle of the superhero book, but both it and the first scene near the beginning both actually contributed to setting the stage, showing the character's mentality and developing the plot... so it still felt a bit weird, but not particularly tacked on or forced - more like just part of this woman's life, uncensored.

The overall storyline is a bit simple, but works. There's not a lot of depth to anything (yet? it is just a first book setting things up...), but everything that is there is delivered well enough.

The fight scenes are clear - though, again, a little simple. Our here gets thrown through cars or into walls, but it doesn't really do anything to her, then she super speeds in to punch them super hard and the baddies go down ... and then someone bigger and stronger shows up and... she does it again. Fair enough. The fire-thrower badguy fight was probably my favorite, it was wrapped up very quickly, but at least it broke the pattern and involved some thinking / creativity.

Mostly I think the book could have benefitted by a little more building up of things or exploring, it feels very much like we're skimming the surface and doesn't give the reader much of a chance to develop any tension or investment - fights are resolved quickly so you never feel there's much threat, romance happens almost immediately so we never really get to know the love interest (or develop any feelings for him... he's just attractive and *there*), other relationships (with the team members or world in general) are equally surface level... it makes for a good, quick read but not as much emotional hook as I think it more fleshed out characters could deliver.

All in all - I liked it, it seemed honest and from someone who understands the problems of people who are dealing with shame / fear / self-hate deal with - there were a few moments where the main character's behavior was genuinely uncomfortable because it reminded me of real life people who I've cared for who were similarly self destructive - which I mean as a real compliment, the author created a character you can care for - and hurt for when they're hurting themselves...

Based on this first book, I'll give this author and series a chance and see where it goes - there's a great deal of potential here, with a little growth and more exploration this could really deliver. Looking forward to the next books!

C.T.
5つ星のうち5.0 Great superhero novel
2018年3月21日 - (Amazon.com)
Amazonで購入
SO NOT A HERO by S.J. Delos is another independent superhero novel which follows the adventures of half-Japanese cute bruiser Karen Hashimoto a.k.a Crusherette/Kayo. She's a supervillain and the former girlfriend of the Lex Luthor/Magneto-esque Doctor Maniac. Like many supervillain protagonists, she's not so much evil but misunderstood and this book chronicles her reluctant attempt to become a superhero.

Having been released from prison on parole, Karne is abused by her parole officer and deeply depressed when she gets the opportunity to join the Good Guys (that's literally their team name) after knocking out one of her fellow supervillains. Karen finds herself bonding with her new team but doesn't feel worthy of being a hero.

I really enjoyed this novel as it has a strong sense of humor and an extremely likable protagonist. Karen Hashimoto is the kind of character who could be played by Olivia Munn if she was a bit more buff. The books go a little overboard in the sexualization issue with its dark opening being straight out of The Girl With the Dragon Tattoo. There's also a bit too much focus on the sexiness of female characters and an extended sex scene in the center but it's still damned good.

The chief appeal of Karen is she's a person you can believe has just sort of fallen into being a bad guy rather than being intristically evil. We've all had relationships and mistaken beliefs over the years. Doctor Maniac is never portrayed as anything but a toxic influence on her life but it's easy to understand why she was drawn to her. In that respect, she's kind of like Harley Quinn with She-Hulk or Wonder Woman's powers.

I like all of the main characters and how they play off of Karen as well as her strained relationship with her mother. There's a lot of humanizing moments that go with the colorful superhero action. I also appreciated the handling of the main villain who manages to express an attitude I've seen with far too many geniuses over the years.

In other words, this is a really entertaining book and I think everyone who loves superheroes should pick it up. There's some flaws but it holds up well as an independent novel and I picked up the sequel immediately after finishing it.

Sean C. Duggan
5つ星のうち4.0 Nothing ground-breaking, but good. And the typos aren't as bad as many of the books out there
2017年5月31日 - (Amazon.com)
Amazonで購入
I picked this one up on an impulse after Amazon recommended it to me and I found I couldn't quite put it down. It follows one Karen Hashimoto, aka Crushette, former supervillainess in the pay of Doctor Maniac. Now, she's an ex-convict on parole, finding that her criminal past and her powers mean that she can't hold down a job, can't retain a place to live. After aiding Mister Manpower, member of the Good Guys, the local superhero team, she gets extended an offer to join them. Can a former villainess turn to the other side? Why did she pull a plea bargain against her former employer and lover? And who is the mysterious villain who seems to have a vendetta against her?

I liked this book. It has its faults — as with many new authors, there are typos that failed to be caught in editing and still have not been fixed, years later — but ultimately, it kept my interest. Karen is your basic Brick, super-strong and super-durable, but she also has learned a lot of little tricks to keep an edge over her opponents. And, despite a very bad temper and a tendency to mouth off, she really does try to be the hero that her younger brother wanted her to be. I didn't see the twist, although in retrospect, it does make sense. I'm not quite convinced enough to buy the second book yet (the first was 99 cents, but the second is a full $3.99) but I liked this one.
続きを読む
レビュー を日本語に翻訳する
Amazon.comのカスタマーレビューを見る(184) 5つ星のうち4.2
click to open popover
Amazonプライム会員ならお急ぎ便、日時指定便が使い放題
さらに、映画もTV番組も見放題。200万曲が聴き放題 。クラウドに好きなだけ写真も保存可能。
> プライムを無料で試す