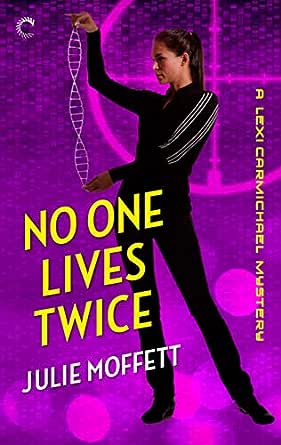 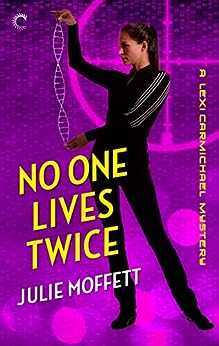 No One Lives Twice: A Lexi Carmichael Mystery, Book One (English Edition) Kindle版 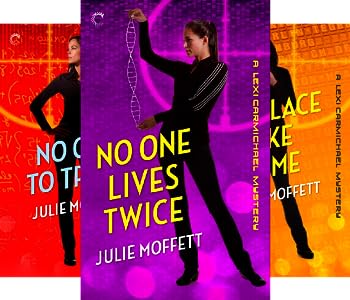 Get your geek on! Prepare for adventure with reformed hacker and trouble magnet Lexi Carmichael as she does whatever it takes to help the good guys win.I'm Lexi Carmichael, geek extraordinaire. I spend my days stopping computer hackers at the National Security Agency. My nights? Those I spend avoiding my mother and eating cereal for dinner. Even though I work for a top-secret agency, I've never been in an exciting car chase, sipped a stirred (not shaken) martini, or shot a poison dart from an umbrella.Until today, that is, when two gun-toting thugs popped up in my life and my best friend disappeared. So, I've enlisted the help of the Zimmerman twins—the reclusive architects of America's most sensitive electronic networks—to help me navigate a bewildering maze of leads to find her.Along the way, my path collides with a sexy government agent and a rich, handsome lawyer, both of whom seem to have the hots for me. Hacking, espionage, sexy spy-men—it's a geek girl's dream come true. If it weren't for those gun-toting thugs…

Julie Moffett writes in the genres of mystery and historical romance. She has won numerous awards, including the 2014 Chanticleer Mystery & Mayhem Award for best YA/NA Mystery, the 2014 HOLT Medallion for Best Novel with Romantic Elements, a HOLT Merit Award for Best Novel by a Virigina Author, the 2012 EPIC Award for Best Action/Adventure novel, and several other awards. Follow her on Twitter at @JMoffettAuthor or at www.juliemoffett.com.

tb40too
5つ星のうち5.0 I'm a Girl, I'm a Geek, I'm a Goner for Lexi!
2017年8月9日 - (Amazon.com)
Amazonで購入
To be honest, I started this book five times before I finally read it. Now this might sound like a bad thing, but we have Mrs. Goodwin's Fifth Grade Class at Duwamish Elementary School in what's now a long gone part of Seattle, but back in 1965, she would give credit for reading a whole book if you read the first five chapters. If after the first five chapters the author hadn't gotten your attention, she gave you credit for trying and you were free to move on. In fifth grade only one book failed her litmus test for me, Emile and the Detectives. As an adult, all sorts of books have failed, but not this one. By the time I reached Chapter Five I was so hopelessly hooked, I could barely stand to put the book down to get any sleep, much less stop reading the thing.

No One is the introductory novel to the Lexi Carmichael legacy of one girl's travel from NSA desk jockey to, well where, frankly, I'm not sure where at this point, I stopped to encourage people like me to read books like this (hopefully that will be people like you). Lexi is a minding her own business on her way from work to being set up by her beautiful wealthy mother (her father lovingly indulges her mother, but doesn't really participate in these set ups) with dinner at her parents lavish home in Washington DC when she discovers herself being mugged for something she doesn't have. By the time she escapes the mugger, reaches her parents' home, discovers she's been set up for dinner with a CPA who thinks he's all that and a bag of chips (and decides she's a secretary instead of the anti-hacker she is since she's a girl, any woman working in IT must read this dinner scene if nothing else, you'll be erecting shrines to Julie Moffett in your front yard!), bribes the Chef to help her escape the dinner, drives home to be mugged again by Middle Eastern Guy who has ransacked her apartment, you'll be hooked!

And this is long before the fifth chapter.

Listen, it's good, it's funny in the right places, it even has a plot. Read it. You'll thank me.
続きを読む
4人のお客様がこれが役に立ったと考えています
レビュー を日本語に翻訳する

johnc57
5つ星のうち4.0 A surprisingly good mix of thriller and cozy mystery
2015年11月27日 - (Amazon.com)
Amazonで購入
First things first. I need to mention I received this book from GoodReads Giveaways. My review was not influenced by this in any degree.

Lexi Carmichael is the heroine of the book. She is a somewhat typical geek who is very good in math and computers and does not have good social skills - you know this kind. She is also a fairly good-looking woman - despite her modesty saying otherwise.

She worked as a low-level grunt in NSA headquarters in Washington, DC. Her work was a boring routine (is not it such for the most of us?). She thought she would never get the excitement of famous spies from fiction, like James Bond in her work. She was completely right: the excitement came not from her work, but from her personal life.

One of uneventful evenings a guy in a dark alley asked Lexi to give him papers her best friend supposedly mailed to her. His gun made a very convincing argument. Lexi, being completely unaware of such papers managed to talk the guy into leaving her alone on the promise she will get in touch with him the moment she has the papers. Or else.

When she got home she found her apartment thoroughly thrashed with yet another guy waiting. He made the same request using the same convincing argument and asked her to give him the papers the moment she has them. Or else.

Lexi still might have had a slight hope of staying out of this, but it was shattered shortly when her neighbor brought her the package in question which was delivered to the neighbor instead of Lexi. It also turned out Lexi's friend who sent her the papers disappeared without a trace leaving our poor heroine to deal with the mess. Fun ensures.

Even from my description of the beginning of the book you might have guessed it is full of cliches. You are right: there are cliches abound from thrillers, cozy mysteries, romance, and chick lit genres.

Lexi works for NSA which practically nobody consider good guys these days, and for a good reason: spying on your own people does tarnish the reputation. I am an IT professional so some of the descriptions of computer-related activities felt like they were written by a person who never approached a computer closer than a couple of miles. I strongly suspect professional biologists would feel the same regarding some other moments of the book.

I mentioned romance. What is the romantic cliche practically everybody hates and are still held dear by romance writers? Love triangles. I am happy to say there is none here. Instead we have a love octagon at least as a bunch of handsome guys kept falling at Lexi's feet.

So it sounds like I would have with a passion, right? Wrong as I enjoyed reading the book. I flew through it in three days considering that these were really busy days for me. What happened? Humor most definitely helped as well as Lexi's attitude.

Lexi being a geek who hates shopping and does not think math is incomprehensibly difficult was another positive side. I am tired of bimbo types of women seemingly very common in literature. Lexi is not one of them.

The mystery itself is quite intriguing and complicated with several interesting and unexpected twists. As redundant as it sounds, I read mystery books for a good mystery; this one delivers.

Finally the writing style makes it a very easy mindless fun read. If you manage to suspend your disbelief you are in for a fast ride.

The final rating is 4 stars - to my complete surprise.
続きを読む
7人のお客様がこれが役に立ったと考えています
レビュー を日本語に翻訳する

bigcuz
5つ星のうち5.0 An excellent introduction to a complex and intriguing character
2019年5月1日 - (Amazon.com)
Amazonで購入
My wife started reading this series, and laughed so much that I had to give it a try. I am rereading it now in preparation for the latest book in the series but, unlike many other books, it holds up to repetition being as thoroughly enjoyable the second (or third or fourth) time around as it was the first. And it’s still remarkably hard to put down, even on the umpteenth read through.
続きを読む
2人のお客様がこれが役に立ったと考えています
レビュー を日本語に翻訳する

jvleearch
5つ星のうち2.0 A geek girl's misadventure...some may like it...I didn't
2015年5月1日 - (Amazon.com)
Amazonで購入
I bought this because it was less expensive to purchase the audiobook when the Kindle version was bought first and I had an interest in the title. It's an ok read, but not a riveting one. I don't think I'll be buying any of the other books in the series. I suppose the writing is acceptable (after all, Ms. Moffett accomplished the not so mean feat of getting published), but the narration of the audiobook version was unimpressive in my view. I was disinclined to read the Kindle version at all. The publisher's reviews hinted that the book would be a mystery/adventure novel written from the viewpoint of a techno-geek young woman, unfortunately I did not relate to the main character and could have cared less about her fate resulting from her misadventure. I listened to most of the book but never bothered to finish listening before starting a new audiobook title.
続きを読む
4人のお客様がこれが役に立ったと考えています
レビュー を日本語に翻訳する

JannieinVA
5つ星のうち5.0 Superb!
2017年7月21日 - (Amazon.com)
Amazonで購入
I just finished Book 9 of this series. I recommend this entire series enthusiastically. The characters are likable, human, and engaging, the dialogue is natural, the plots are creative, the settings are sometimes exotic, and every single book leaves the reader feeling good. I'm so happy to have caught this series when there were 9 books already published. Now I have to wait for number 10, but I'm a very willing series aficionado and I think I can manage to wait. I think....
続きを読む
3人のお客様がこれが役に立ったと考えています
レビュー を日本語に翻訳する
Amazon.comのカスタマーレビューを見る(284) 5つ星のうち4.5
click to open popover
Amazonプライム会員ならお急ぎ便、日時指定便が使い放題
さらに、映画もTV番組も見放題。200万曲が聴き放題 。クラウドに好きなだけ写真も保存可能。
> プライムを無料で試す