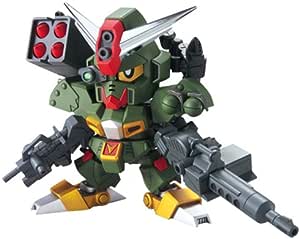 Sono
5つ星のうち5.0 A fun little bundle of firepower
2016年2月5日にアメリカ合衆国でレビュー済み
Amazonで購入
This little guy was a fun treat to build. He's easy, a quick build will probably only take you an hour or two. (longer if you clean up the nubs a bit, which there arent many and are hardly visible) Looks great ouf the box, really needs no panel lining except maybe on the grenades and shoulders, but even then it's not needed.

For an SD, he's fairly posable. Obviously you can't expect modern high grade range, but for what it is it can pull off a fair bit of poses, just one warning, the arm sockets are loose and pop out very easily, you might have trouble with that when putting his weapons in his hands, but they will stay in there once you're done! The guns of which while simple look good and the missile launcher is pivotable and not just a static part.

There is a 4 pairs of eyes with the kit, you can use two of them at once, there's an eye piece, put one sticker on the front and one on the back and you can switch between the eyes by flipping it around. Sadly, it is only for the 2, you have 4 stickers, why they didn't just mold another piece for whatever 2 are left i have no idea. The big machine gun has a tripod piece so it can turn into a turret, and you can combine the machine gun, SMG AND the missile launcher to form a huge assault turret. It's easy and it looks really cool. Lastly you do get a combat kniffe which comes in a nice shade of shiny gray and has a small red piece for the guard, it's not much but it looks neat, it can be stored on a clip on the back so you don't lose it. Also the grenades on its shoulder can be removed and placed in the right open palm to make it look like he's about to throw it. Neat little detail.

Pretty good bang for your buck, fantastic out of box presentation (did i mention the v fin is chrome?!) easy build and a fair amount of playability, just watch the arms.
続きを読む
1人のお客様がこれが役に立ったと考えています
違反を報告
レビュー を日本語に翻訳する

Token
5つ星のうち5.0 Going Commando
2013年3月19日にアメリカ合衆国でレビュー済み
Amazonで購入
This is a neat little guy. He was quite easy to put together and it was fun to do so as well. I recommend a pair of side clippers, a razor knife, a Gundam marker and paint. I always paint any thing that is suppose to be gold or silver with actual gold and silver. This makes it stick out even more. You can however just put it together without any paint and it would still look good.
The commando title that this little guy is named for is well deserved as he is loaded with all sorts of tools for destruction. My personal favorite being the shoulder mounted missle launcher. You can actually reconfigure his weapons in various ways. I really like this Gundam quite a lot. I own a few and this is now one of my favorites.
I recommend it.
続きを読む
5人のお客様がこれが役に立ったと考えています
違反を報告
レビュー を日本語に翻訳する

Caleb
5つ星のうち5.0 Takes a little while but comes with lots of weapons and goodies!
2019年10月1日にアメリカ合衆国でレビュー済み
Amazonで購入
Painted him myself! Easy kit to build and looks awesome!
続きを読む

5つ星のうち5.0 Takes a little while but comes with lots of weapons and goodies!
2019年10月1日にアメリカ合衆国でレビュー済み
Painted him myself! Easy kit to build and looks awesome!
このレビューの画像

Anonymous
5つ星のうち4.0 Pretty good model
2016年12月12日にアメリカ合衆国でレビュー済み
Amazonで購入
Pretty good model, even if you're a beginner. When you panel line it looks really really good. The grenade pins aren't pre-colored grey so that was a bit of a bummer. I probably am going to get a paint marker and recolor those later. One major downfall of this set are the ball joins in the arms. They pop out so easily. I slapped a bit of duct tape over them to prevent them from falling out easily but the range of motion in the arms is very very low. Overall though, great set.
続きを読む
違反を報告
レビュー を日本語に翻訳する
すべてのレビューを参照します
Amazonプライム会員ならお急ぎ便、日時指定便が使い放題
さらに、映画もTV番組も見放題。200万曲が聴き放題 。クラウドに好きなだけ写真も保存可能。
> プライムを無料で試す