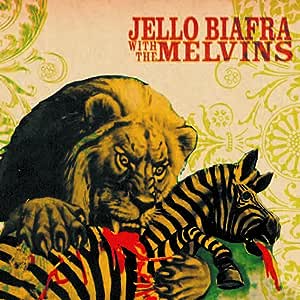 Never Breathe What You Can't See

This is a musical monster of massive proportions, bristling with Jello's manic energy and anchored by the sheer heft of the Melvins' collective heaviness. With both camps flexing their musical prowess, the result is something that retains the signature qualities of both artists and yet sounds refreshingly unlike anything that either has recorded in the past.

This is a musical monster of massive proportions, bristling with Jello's manic energy and anchored by the sheer heft of the Melvins' collective heaviness. With both camps flexing their musical prowess, the result is something that retains the signature qualities of both artists and yet sounds refreshingly unlike anything that either has recorded in the past.

P D Nash
5つ星のうち5.0 Thank you, Biafra, You are the savior
2012年3月31日に英国でレビュー済み
Amazonで購入
On paper this collaboration between punk legend Jello Biafra and sludge veterans The Melvins shouldn't work but on record it's the perfect union of loud, crunching riffs and Biafra's unique voice. Opening one-two 'Plethysmograph' and 'McGruff the Crime Dog' showcase King Buzzo's riffmanship and Dale Crover's fantastic drumming that fans of The Melvins will be familiar with. As you'd expect with Biafra the lyrics are politically charged, 'Plethysmograph' is about a device used to monitor sexual arousal ('with a little electronic ring, clamped around your love thang') while 'Islamic Bomb' deconstructs American foreign policy ('so the conga line of missiles, dances out of the storage sites, past the checkpoints left abandoned, kuz the guards took a bribe'). There's none of The Melvins usual psychadelia on here, it's just straight up, balls-out hard rock. Recommended for fans of both The Melvins and Jello Biafra.
続きを読む
1人のお客様がこれが役に立ったと考えています
違反を報告
レビュー を日本語に翻訳する

C. S. Caps
5つ星のうち5.0 A Legend Doesn't Disappoint
2004年12月2日に英国でレビュー済み
Amazonで購入
Biafra is one of the most important people ever in the history of political music. His record label has constantly released innovative works from unusual artists alongside commentaries from prominent political characters. He has also wriiten some of the best punk music and political lyrics that i know of. This is a typically genius pieice of work. Biafra plays with many ideas, analysing the ridiculous consequences of the war on terror and world debt (Islamic Bomb) as well as the absurdity of the US's tightened security (The Lighter Side of Global Terrorism). It is all done with typical class and he has rarely sounded so passionate. The Melvins are of course a great backing band and contribute some blinding music. Caped Crusader is the most musically enjoyable piece but they only really go full-pelt Melvin mental on the final track, totally unlike anything Biafra has been a part of before. Also, Adam Jones of Tool plays on the odd track and his presence can truly be felt at certain points. All in all a fresh album, with a refreshingly modern poltical outlook (no need to pull out an MDC record now!) that comes thoroughly recommended.
続きを読む
1人のお客様がこれが役に立ったと考えています
違反を報告
レビュー を日本語に翻訳する

SouthAfricanGuy
5つ星のうち5.0 Jello for president
2013年2月26日にドイツでレビュー済み
Amazonで購入
Jello Biafra is the ultimate punk rocker, remaining true to original punk as he has done for more than 30 years. This album informs all who are willing to listen, that our governments are run by large corporations and act not in the interest of the people but in the interest of profit. Stop complaining all the time and start doing something about it. Civil disobedience!
続きを読む
違反を報告
レビュー を日本語に翻訳する