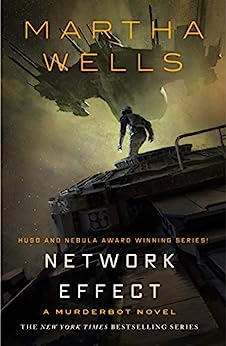 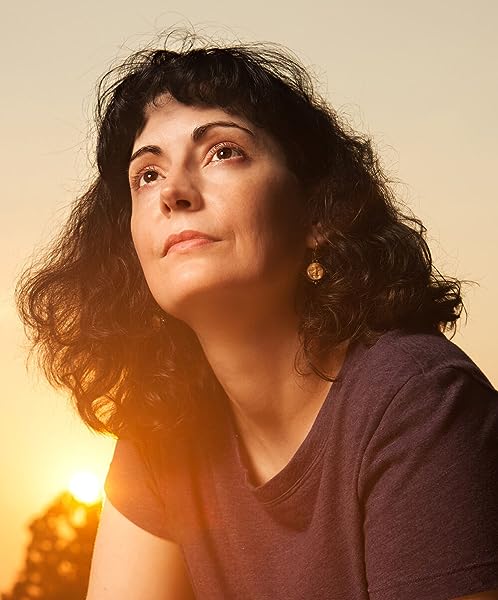 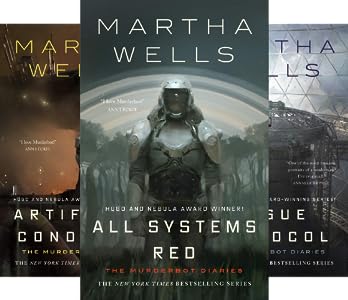 Named a Best of 2020 Pick for NPR Book Riot Polygon If the first books were episodes in a four-part TV miniseries, then Network Effect is the feature-length movie with the bigger budget and scope... Murderbot and the world it inhabits constantly leave you wanting more, in the best possible way. Network Effect is a wonderful continuation of the series, and I highly recommend it. --NPR I might have a little bit of a thing for a robot. Its name is Murderbot... Network Effect [is] great.--Wired A glorious thought-provoking Murderbot tale...As we may be stuck in social isolation for the foreseeable future, I can think of no better company than this paranoid android. --The New Scientist

"This is a terrific space opera, a classic space adventure but with a very modern sensibility... Murderbot, with its on-point observations and addictive interior monologues, is easily one of my favorite characters in SF...
I found I had to stop myself from rereading the whole book right on the spot... Highly recommended." --Charles de Lint for Fantasy & Science Fiction A welcome expansion of this universe and lays the groundwork for more stories to come in a series that continues to grow and impress. --Booklist, starred review

SecUnit's gloriously candid, frequently confused assessments of its crew and their predicaments allow for an amusingly childlike perspective on what it means to be human... Series fans and anyone who enjoys humor-infused space operas won't want to miss this. --Publishers Weekly starred review This is a perfectly paced space opera adventure novel... I could read about Murderbot all week. --Locus It's pretty much the perfect follow-up to the series, and manages to be surprising all the way to the final page... I was floored by Network Effect, and if you're into Murderbot in any way, I think you will be too. --Aurealis Martha Wells' Network Effect is phenomenal and likely surpasses the high expectations set by the novellas... I haven't met a human who didn't enjoy these books. --The Quill to Live

Network Effect is the perfect fare for any seeking the perfect weekend binge read or escapist vacation. --BookPage If you're looking for a mystery that perfectly tempers grisly scenes with lighthearted humor, this is the series you need to read. --Bustle Wells continues to find sensitive and effective directions for Murderbot's character growth. This whole series is fantastic, and this novel is no exception. If anyone had any doubts about Murderbot's ability to carry a full length novel, this should put them to rest. --SFRevu Anyone who enjoys humor-infused space operas won't want to miss this.--Publishers Weekly Starred Review Wells' first four Murderbot novellas were sensations, and the first full-length book in the series is a funny, entertaining follow-up. --Medium Another great entry into a series that probably needs very little introduction. Murderbot is a top bot, a great pal, and I'm glad that they're looking to stick around for more adventures to come. --Nerds of a Feather Murderbot will make you laugh and punch you in the feels a fair few times ... I will always look forward to more Murderbot adventures. --The Nerd Daily Readers will love journeying with Murderbot again in a bigger and wilder adventure guaranteed to leave you craving more. Needless to say, I'm already burning to get my hands on the next one. --The Bibliosanctum

Wildly original and endearing, Network Effect is a complex work of genius that expands upon a fascinating scientific landscape in a conversational, sardonic tone. --Paperback Paris Unpredictable, hold-your-heart beautiful, heartbreaking and, all in all, my new favourite sci-fi book. --Orbiting Pluto
Praise for The Murderbot Diaries

The Murderbot series is a heart-pounding thriller that never lets up, but it's also one of the most humane portraits of a nonhuman I've ever read. Come for the gunfights on other planets, but stay for the finely drawn portrait of a deadly robot whose smartass goodness will give you hope for the future of humanity. --Annalee Newitz I love Murderbot!--Ann Leckie We are all a little bit Murderbot.--NPR "Wells gives depth to a rousing but basically familiar action plot by turning it into the vehicle by which SecUnit engages with its own rigorously denied humanity." --Publishers Weekly starred review "I already can't wait for the next one." --The Verge "A great kick-off for a continuing series." --Locus --このテキストは、paperback版に関連付けられています。

MARTHA WELLS has written many fantasy novels, including The Wizard Hunters, Wheel of the Infinite, the Books of the Raksura series (beginning with The Cloud Roads and ending with The Harbors of the Sun), and the Nebula-nominated The Death of the Necromancer, as well as YA fantasy novels, short stories, and nonfiction. Her New York Times and USA Today-bestselling Murderbot Diaries series has won the Hugo, Nebula, Locus, and Alex Awards. --このテキストは、paperback版に関連付けられています。

Reaper
5つ星のうち3.0 Murderbot hits systems failure at novel length
2020年6月22日に英国でレビュー済み
Amazonで購入
Although my preference is for literary science fiction of the type that is uncommon now (British near future SF of the 60s-80s) and US social SF (of the 50s-90s variety) I am very familiar with all aspects of the genre. I enjoyed the four Murderbot novels very much -even though a dysfunctional AI android construct with a fairly adolescent worldview is not the kind of character I really relate to, Martha Wells depicted such a being amusingly, insightfully and with great technical skill. Although they're basically mind candy, the novellas are muscular, taut and well-told.

At novel length, however, Wells' limitations show clearly: there is very little character development, the plot is nothing we've not read before in this series and - as is inevitable with most series - sopshisticated readers will begin to feel that they're being spoon-fed more of the same, which is far from satisfying. I have no problem with genre writers who have a formula, as long as the formula is original and cannot be replicated by others. Also, as a novel, 'Network Effect' is too long by a good 100 pages - a common problem with most novels these days is excessive length demanded by publishers so that the books feel like 'value for money' for buyers, as if 'never find the quality feel the width' as an approach is a guarantee of good storytelling. It's not. 'Network Effect' felt flabby, slow and tedious compared to 'All Systems Red' for example.

Wells really should leave Murderbot be now, as the returns are diminishing. Trouble is, many readers can't see when they're being spoonfed by having their expectations fulfilled, when truly great SF goes for a fresh novum each time, turns the world on its head via paradigm shift and finishes with a bang of conceptual breakthrough. or at least it used to. Now, series books which are written almost entirely for commercial reasons for the many readers who want repetition and familiarity (concepts which are the opposite of the cognitive dissonance sophisticated SF readers require) are one reason why written SF has been in decline for several decades as an art form.

If you want more of the same, this will make you happy, but if you want new ground broken, don't buy 'Network Effect'. I'm done with Murderbot personally, as this novel didn't leap off the page and light me up like the early novellas did.

Wells, if you're that good an SF writer, turn out some singletons in the the way Philip K Dick, Robert Silverberg, J G Ballard, K W Jeter and Ursula Le Guin did.

Rob Ash
5つ星のうち2.0 Finally, a full size novel...but it just doesn't work.
2020年7月26日に英国でレビュー済み
Amazonで購入
This is a tough one to write.
I absolutely loved all four Murderbot novellas, and desperately wanted this full-length novel to be as good, or even better. Unfortunately, that wasn't the case.
I have to say I was pretty disappointed with this book, actually, to be honest, I found it frustrating and irritating. The thing is chock full of bracketed sections, especially in the early pages, which just irritated the hell out of me. There are so many references to the previous four books, and not really necessary for the story, that they started to feel like those annoying Youtube adverts that pop up mid-video.
And maybe it's just me, maybe I'm being a little over-analytical, but Murderbot wasn't the Murderbot I remember. Its usual irritation with humans, dislike of too much conversation and general self-conscious embarrassment were almost non-existent, and for me that was what made Murderbot the lovable character it is/was. And no, I'm not buying "It's character development."
It's taken me three weeks to force my way through this book. I simply found myself unmotivated to pick it up day after day. The word I keep coming back to in order to describe the writing in Network Effect is 'cluttered.'
Sorry Martha, I love Murderbot, but this was a big miss for me.
続きを読む
4人のお客様がこれが役に立ったと考えています
違反を報告
レビュー を日本語に翻訳する

D. Beecher
5つ星のうち5.0 Murderbot!!!!!
2020年5月7日に英国でレビュー済み
Amazonで購入
I flat out adore the four Murderbot novellas, and this the first Novel doesn't disappoint. But do read the novellas first it is not a standalone.

I feel like hopping up and down like a fan girl blurting out all my favourite things but I don't want to spoil it for anyone. It was just as exciting, action-packed, emotion stirring and funny as usual. Some old favourites, some new friends, I just love this world. In fact the only bad thing is having to return to Corona World afterwards. What do I have to look forward to now except re-reading them all again.
続きを読む
4人のお客様がこれが役に立ったと考えています
違反を報告
レビュー を日本語に翻訳する

Maggie
5つ星のうち5.0 Stunning
2020年5月8日に英国でレビュー済み
Amazonで購入
Absolutely top notch writing I can’t say enough to highly recommend this story. One of the best series I have ever read and this book doesn’t let the others down. Murderbot continues (her) emotional growth (please say it’s a she, it has to be a woman) with a little help from kidnapped humans, an angry transport AI (ART), alien intelligence attempted overthrowing of humans, so just a normal day in the life of Murderbot. I’m off to reread the first books again. Just adore Murderbot. ❤️❤️❤️❤️❤️ can’t wait for the next one.
続きを読む
2人のお客様がこれが役に立ったと考えています
違反を報告
レビュー を日本語に翻訳する

Stephen Cummins
5つ星のうち5.0 Yep, five stars.
2020年5月24日に英国でレビュー済み
Amazonで購入
I don’t usually give five stars, there’s always some little think you can pick at but really, what more did I want?

I got humour: how murderbot sees humans is hilarious as it seems true: we do just talk a lot and wave our arms about.
It has action: cool spaceships, aliens, robots, fighting, explosions!
It has depth: humans are, well, instinctively humane. Corporate contracts and greed are what puts out that bright flame.
It has humanity: relationships are key and it is touching to see Murderbot grow more human.